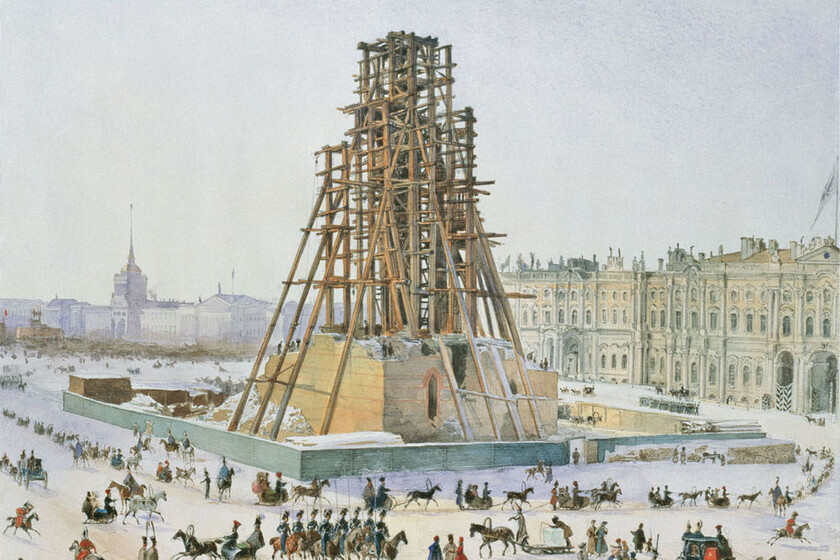 604 tons had the mass of the heaviest column in the world. A column of solid Finnish red granite that was erected in Saint Petersburg to commemorate the Russian victory over the Napoleonic army. The column is made from a unique piece of red granite about twenty-five and a half meters long and approximately three and a half meters in diameter.

french architect Augustus of Montferrand he used 2,400 men (1,700 dedicated to the uprising proper) for less than two hours.

The alexander column, also known as the Alexandrian column, is still standing. The monument has a height of forty-seven and a half meters, the tallest of its kind in the world, and is crowned by a statue of an angel carrying a cross, made by the Russian sculptor Borís Orlovski, and its physiognomy bears a remarkable resemblance to that of Emperor Alexander I.


Without the help of modern cranes or engineering machines, the column was raised in less than two hours by three thousand men under the guidance of William Handyside, and it is positioned so perfectly that it does not need any accessories on the base.

As explained Vaclav Smil in his book energy and civilization, this huge piece of granite was quarried from Finland and transported on a specially built barge:

A massive 150-foot-high wooden scaffold had been erected on the pedestal, with pulleys hanging from five double oak beams. A 1/12 scale model of the scaffolding was built to guide the carpenters during its construction. For the lifting, 60 winches mounted on the scaffolding in two staggered rows were used. The pawls were iron drums mounted on a wooden frame, the upper blocks hung from double oak beams, and there were 522 ropes (each rated to lift 75kg) attached to the axis of the column. The total mass of the monolith, including all devices, was 757 tons.

These monumental works of engineering defy all intuition, as also happens with the pyramids of Egypt, and for this reason, sometimes, there are those who hold magufa theories about their construction (aliens, magic, etc.). Actually, the Alexander Column, beyond its spectacular nature, it is one more proof of how small our brain is to understand things that are too big or complex, such as the following:

Read:  The problem with using so many statistical graphics in the press: we do not know how to interpret them correctly

Is the new Pixar movie a copy of a video game?

PASA, a company that transcends its environmental commitment