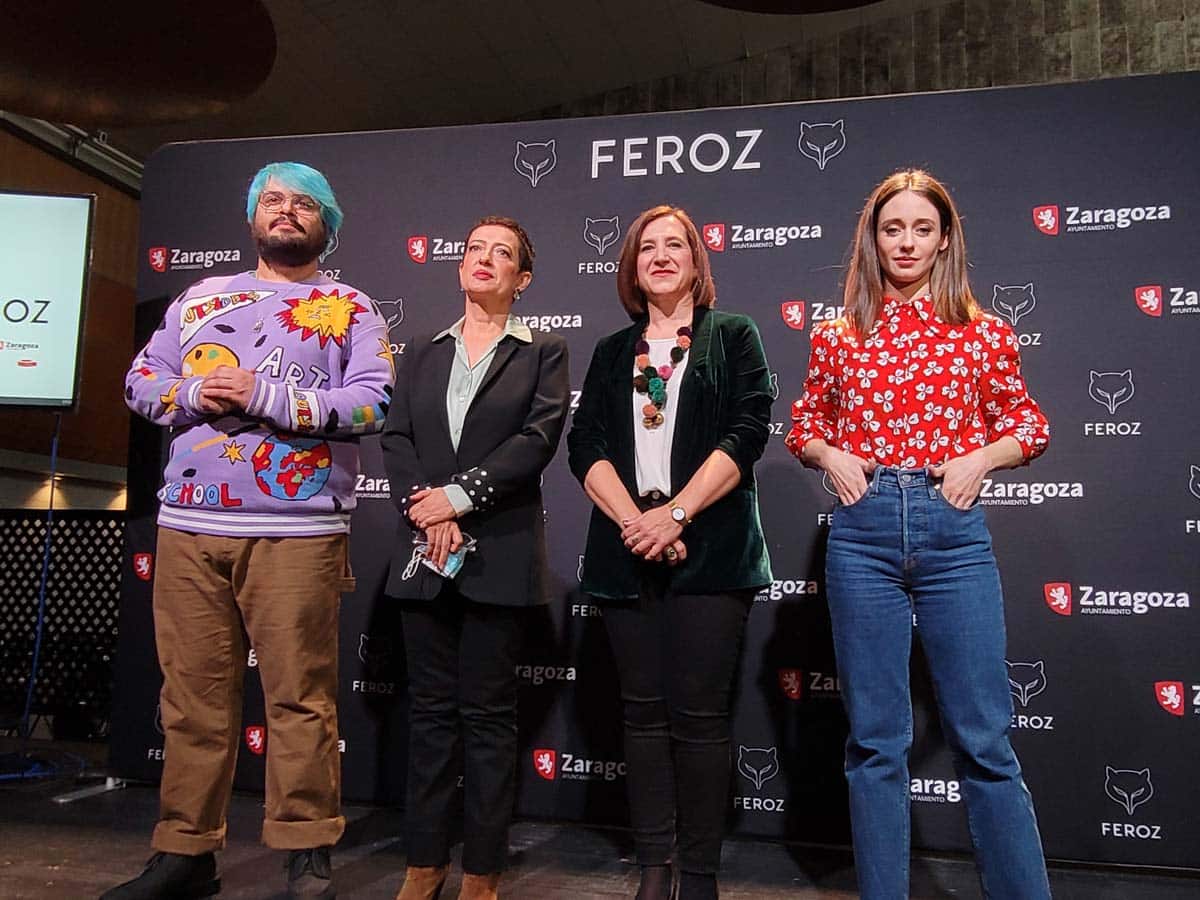 The good boss by Fernando León de Aranoa has nine nominations for the 2022 Feroz Awards, the Spanish Golden Globes

Nominations for Feroz Awards 2022, the spanish version of the golden globes, were announced this morning at a press conference held at the Zaragoza Auditorium, the same venue that will host the awards ceremony on January 29. With the presence of the deputy mayor of Zaragoza, Sara Fernández, and the president of the Association of Cinematographic Informants of Spain, María Guerra, the actors Elena Rivera and Brays Efe have announced the list of nominees for this edition.

The event began with a few words of welcome from Sara Fernández, as deputy mayor of Zaragoza: “The city is preparing with open arms, and with the warmth that characterizes us, to receive on January 29 the nominees and the entire Spanish audiovisual and film sector. The Feroz Awards and our collaboration with the Association of Cinematographic Informants of Spain to create an entire program around this event are making Zaragoza the home and the home of the audiovisual sector in Spain “, pointed out Fernández, who has highlighted the importance of “Vindicate cinema as a sign of collective, artistic, social and cultural identity”.

You can see the reading of nominees below

They follow him closely Parallel mothersby Pedro Almodóvar; and Maixabel, by Icíar Bollaín, both with eight nominations for best dramatic film, direction, leading actresses (Penélope Cruz and Blanca Portillo, respectively) and original music, both by Alberto Iglesias. In the case of Almodóvar’s film, Aitana Sánchez-Gijón and Milena Smit also aspire to the statuette as supporting actresses, as well as best trailer (Alberto Leal) and poster (Javier Jaén). Meanwhile, Bollaín’s feature film opts for best screenplay (written by the director herself together with Isa Campo), leading actor (Luis Tosar) and supporting actor (Urko Olazabal) as well as best trailer (Rafa Martínez).

Liberty, by Clara Roquet, has achieved four nominations: best dramatic film, direction, screenplay (both signed by Clara Roquet) and poster (Jordi Trilla). With three nominations there are two films: Love insteadby Rodrigo Cortés, also nominated for best direction, screenplay (by Cortés himself and the German writer David Safier) ​​and music (Víctor Reyes); and Three, by Juanjo Jiménez, who is competing for the awards for best dramatic film, actress (Marta Nieto) and screenplay (work by Jiménez with Pere Altimira).

The quintet of candidates for best dramatic film completes it Holy spirit, by Chema García Ibarra, while, in the category for best comedy, there are also competing Chicks, by Carol Rodríguez Colás (with whom Carolina Yuste aspires to best supporting actress); The coverby Secun de la Rosa; An optical effector, by Juan Cavestany; and Six running daysby Neus Ballús.

In the original music section, together with the aforementioned Alberto Iglesias, Zeltia Montes and Víctor Reyes, the music band Vetusta Morla competes for the film The daughter.

In addition, they have been finalists for the Feroz Cinetools Award for the best trailer The grandmother (Miguel Ángel Trudu), ‘The good patron’ (Maurits Malschaert, Mick Aerts), ‘The laws of the border’ (Miguel Ángel Sanantonio), ‘Parallel mothers’ (Alberto Leal) and ‘Maixabel’ (Rafa Martínez, who adds his 14th nomination in this category, which he has earned twice).

In the series sections, two comedies lead the competition with four nominations each: Kings of the night, by Adolfo Valor and Cristóbal Garrido, who in addition to being best comedy aspires to best actor (Javier Gutiérrez), best actress and supporting actor (Itsaso Arana and Alberto San Juan); and Come on Juan, by Diego San José, whose previous installment, Come on Juan, achieved the Feroz for best comedy in the last edition. Its protagonist, Javier Cámara (Feroz for best actor for the first season, ‘Vota Juan’), also competes for the award as a protagonist along with María Pujalte and Adam Jezierski as best supporting actors.

The nominations for best comedy series are completed by Bob Pop’s ‘Maricón perdidos’, which has also earned nominations for Candela Peña and Miguel Rellán as supporting actors; and ‘Perfect Life’, by Leticia Dolera, with which Enric Auquer once again competes for the Feroz for best supporting actor that he already obtained two years ago. The category includes four titles instead of the usual five because the award rules limit the number of candidates as fewer than 20 series are registered in this section.

The finalist titles for the best drama series are Thistle, by Ana Rujas and Claudia Costafreda, who also aspires to win the Feroz for best actress with Ana Rujas herself and best supporting actress with Yolanda Ramos; The Fortuneby Alejandro Amenábar, who has also achieved nominations for Ana Polvorosa as the leading actress and Karra Elejalde as a supporting actor; Stories to not sleepby Alejandro Ibáñez and David García; The time that I give you, by Nadia de Santiago, Pablo Santidrián and Inés Pintor, who also get nominations for best actress and leading actor, Nadia de Santiago herself and Álvaro Cervantes; and ‘Hierro’, by Pepe Coira, which also has its two main actors nominated, Candela Peña –who already won the Feroz with the first season of this series and Darío Grandinetti.

In the interpretation categories, Maribel Verdú, candidate for Ana Tramel, The Game; Daniel Grao, for ‘Hit’; and Najwa Nimri, for The Money Heist.

On December 21, the nominations for the Feroz Rapture Awards for Fiction and Non-Fiction will be announced, intended for those works that deserve recognition for their special artistic achievements and / or innovative contributions in their respective fields.

As already announced, the Feroz 2022 ceremony will be held on January 29 at the Zaragoza Auditorium, presented by the film director Nacho vigalondo and the comedian Paula Púa and with a script by Pilar de Francisco. The red carpet and the gala will be broadcast live on the Feroz Awards YouTube channel.

The Feroz 2022 are organized by the Association of Cinematographic Informants of Spain and have the Zaragoza City Council as the main sponsor. In addition, they are sponsored by the Denomination of Origin Ribera del Duero, Cotril and Cinetools and with the support of the Institute of Cinematography and Audiovisual Arts (ICAA) of the Ministry of Culture and Sports.

The IAEC is a plural group of more than 230 journalists and critics dedicated to reporting on film on television, radio, press and the Internet throughout the country. Since 2014 they have delivered the FEROZ® AWARDS to highlight the best of the Spanish audiovisual production of the year.

Stay tuned to our Instagram account where we will share some interesting interviews with Brays Efe and Elena Rivera, interpreters in charge of reading the nominees at the event.