The flopping? Ethereum price weakens after The Merge and is at risk of falling 55% against Bitcoin

By MatthewSeptember 17, 2022No Comments4 Mins Read 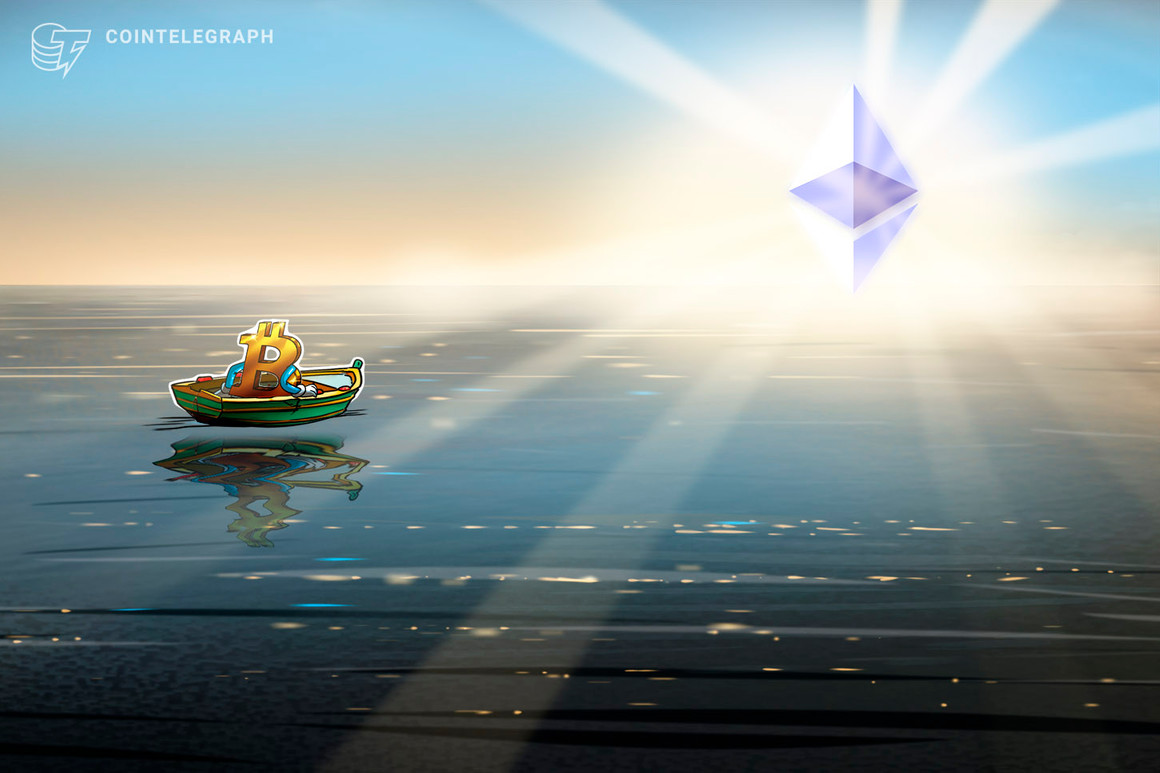 Ethereum’s native token Ether (ETH) has been forming an inverse cup and handle pattern since May 2021 on the weekly chart, hinting at a possible decline against Bitcoin (BTC).

A reverse cup and handle is a bearish reversal pattern, accompanied by lower trading volume. It normally resolves after the price breaks below its support level, followed by a decline towards the level by a length equal to the maximum height between the rate peak and the support line.

Applying the theoretical definition on the weekly chart of ETH/BTC presents 0.03 BTC as its next downside target, around 55% from current price as of Sep 16.

Index hide
1 Can the ETH/BTC pair make a Dow Jones?
2 Flipping or flopping?

Can the ETH/BTC pair make a Dow Jones?

On the other hand, the ETH/BTC pair could nonetheless offer big gains in the coming years.

On the weekly record chart, the ETH/BTC pair is painting a potential cup and handle from January 2018. In other words, a rally towards 0.5 BTC in 2023 is on the cards, up more than 520% ​​from price levels. current.

Unlike their inverse counterpart mentioned above, cups and handles are bullish reversal patterns with their upside targets located at levels equal to their high when measured from their breakout point.

Seasoned analyst Tom Bulkowski notes that these patterns have a 61% success rate in meeting their upside targets.

For example, the cup and handle pattern that formed on the Dow Jones chart during the Great Depression of the 1930s and 1940s – in which the cup took nine years to develop and the handle another four – reached its upside target in the 1950s, as shown below.

Potentially, ETH/BTC could now be in the handle stage of a similar cup and handle pattern, as shown through the purple shaded descending channel zone in the chart below.

Read:  "The IBC is a serious alternative for secure cross-chain communication," says Sunny Aggarwal of Osmosis

The pair is expecting a breakout move above the 0.08 BTC pattern resistance level. At the moment, it has been trading lower within the handle range, with an eye on a pullback towards its lower trend line around 0.05 BTC after touching the upper one as resistance this week.

Ethereum’s potential to overtake Bitcoin by market capitalization has been commonly dubbed “the flippening.”

Ethereum is competing with Bitcoin to become the so-called “inflation hedge,” according to Joshua Lim, head of derivatives at Genesis Trading. Lim cited Ethereum’s August 2021 EIP-1559 update, which introduced a commission burning mechanism into its protocol.

According to Ultrasound.Money, Ether supply growth now stands at minus 1.43% per year. In other words, the token could be getting “flat” over time. Lim argues that this makes Ether an attractive alternative to Bitcoin among institutional investors.

12/ can BTC remain king going fwd? only time will tell if the ETH narrative post-Merge is strong enough to overthrow the status quo

in the meantime, expect BTC to continue to trade like a funding asset and preferred hedging instrument for the entire asset class

But many argue against the narrative of change, including Rahul Singh, the co-founder of Defi platform FINtokens. He told Cointelegraph that Bitcoin would continue to exist as “digital gold” while Ethereum would become an “Internet 2.0” project.

Never Ever…
B’coz#bitcoin in Digital Gold
&#Ethereum is Internet 2.0