Bullfrag
Home Technology Automobiles The first Toyota GR Day brought together the present and sporting past... 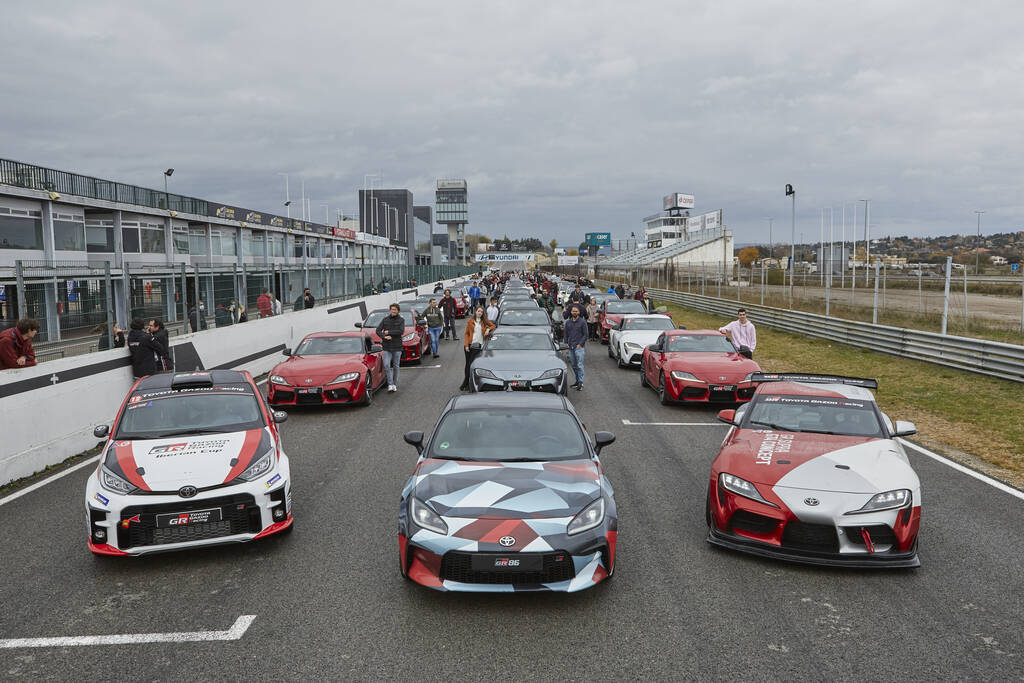 On Saturday fans of the Japanese brand met at the Madrid motor temple, the Jarama Circuit. The attendance was 1,600 people, with a representation of current Toyota sports cars and several classic models from individuals.

Within a few years, from 1999 to 2009, Toyota made sportsmanship one of its last priorities. Over the years that has been changing, which is why sports models have returned, they have entered several international competitions and seek to reinforce that brand image that also makes sports cars, not just hybrids and family cars.

On Saturday the Jarama Circuit was held on first Toyota GR Day in Spain, an event that brought together fans and customers of the brand. The call for cars aimed to enter the track was more successful -in format “Track-day”– than the static display of classic models. The capacity was limited, in a world without COVID we would have seen more attendance.

Visitors could not only see the new GR 86 (yes, camouflaged), the GR Yaris RZ for the Iberian Cup, the GR Supra Jarama Racetrack Edition and GT4 Concept, and a multitude of GR Yaris. There were also some classic Supra, Celica and MR2, you could even see a Corolla Levin AE86 and a Corolla GT-S, a rarity in the Peninsula. There were also several GT86 and GR Sport versions of Corolla, C-HR and Yaris.

The organization provided several spaces for attendees, perhaps sized for a much larger audience. In addition to the “official” cafeteria at Jarama, there were a couple of vans with soft drinks, a Playstation Gran Turismo simulation area, a static display in paddock, a slalom circuit to melt adrenaline, six-lane SCX track, exhibition of boutique, free runs and even a “slow lap”.

GR comes from Gazoo Racing, the umbrella under which all Toyota’s racing and sporting / aspirational models are carried

All those attending the concentration and batches were held family photo on the straight of the circuit, which was followed by a slow lap on the track, practically second at idle, without the slightest incident. In the runs, only slight damage had to be regretted due to some off-track, nothing out of the ordinary in a circuit.

The batches were strongly dominated by the GR Yaris, a model that is having relative success in such a contracted market and where there is little room for small cars with very powerful engines. There were a multitude of GR Yaris with the Circuit Pack, an option that raises the price by 6,000 euros. The GR Sport did not enter the track except for the “slow lap”, but one could vent in the karting permanent circuit.

The weather conditions were not the most likely to fill the circuit to the brim, despite the efforts of the organizers, Toyota Spain and 8000 laps. Fortunately, the rain respected the track and not enough water accumulated to sour the party. The asphalt drainage did its job.

Read:  Mercedes Vision EQXX, an electric vehicle with more than 1,000 km of autonomy is coming

Some guests sat in the right seat of the GR Yaris and GR Supra to see what those initials to the left of a model name mean, big words with an experienced pilot at the wheel. Remember that the GR Yaris is the first genuinely Toyota sports car to appear in 20 yearsAs both GR Supra and GT86 have been made in collaboration with BMW and Subaru, respectively.

In any case, all GR models are very capable of get smiles and adrenaline sweat in an environment as demanding as a circuit, despite being street cars. In official competitions, cars have raced in the Jarama much inferior in performance and that could not be registered; these yes.

Toyota GR86, the generational replacement of the GT86

The media had the opportunity to test the GR Yaris, GR Supra 3.0 and GR Supra 2.0 with very little time difference. These three models had already been presented on the circuit to the national press in the same circuit. The only scoop, the GR Supra Jarama Racetrack Edition, it was only in static presentation.

It is a special edition limited to 90 units worldwide. Only two arrive in Spain, one is from Toyota Spain and the other will fall into the hands of a lucky person. It is distinguished by painting Horizon Blue, 19 “matte black wheels and red brake calipers.

Inside we find black Alcantara upholstery with blue stitching and the circuit logo in carbon fiber inserts. He is accompanied by Café Leather accessories in the form of bags and travel tags, a key ring and a pair of gloves. It is the most elite GR Supra on sale in Spain and will be highly valued in the future.

Definitely, the Japanese brand is deservedly recovering the lost sporting prestige, both in the competitions where it participates and at the level of sports cars that can be bought in its exhibitions. Although the commitment to hybrids has not declined at all – indeed, it has intensified – sportsmanship and responsibility can coexist.

Toyota right now is one of the few manufacturers who can afford to sell certain “high” CO2 models because it is more than offset by all low-emission hybrids. In the race to the electric car they are lagging, that is another. If they have been able to recover sporting prestige, they can also become more electric.

The one who signs these lines says goodbye with a reflection, and it is that there should be more events of this type in Spain. Since you can only race and fully enjoy machines of this type on the circuits, more manufacturers should take advantage of the tracks that we have in Spain -very good, let it be said- to the delight of their fans and customers who spend their money on this type of cars.