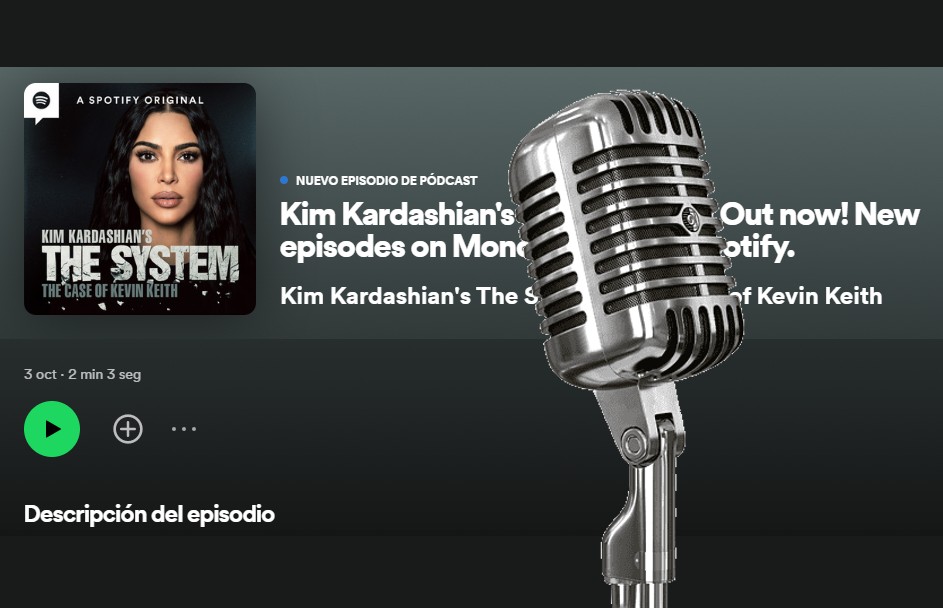 This Monday, October 3, Spotify released the first two episodes of the original podcast worldwide. “Kim Kardashian’s The System: The Case of Kevin Keith”.

After the premiere, the platform will release new episodes every Monday.

In total, the podcast is made up of eight episodes narrated by Kardashian along with true crime producer Lori Rothschild Ansaldi.

The production is in charge of Spotify and Tenderfoot TV.

According to what had been disclosed in the presentation of the agreement between the celebrities and the platform, The podcast tells the story of Keith, an Ohio man convicted of a triple homicide who has been fighting with his family for almost three decades to prove that he was wrongfully accused.

For Kardashian, the Spotify podcast is another step in her activism for criminal justice reform in the United States.

In 2018, Kardashian successfully petitioned Donald Trump for clemency in the case of Alice Marie Johnson, who served 22 years in prison for a non-violent drug offense.

“The System” documents the case of Keith, who in February 1994 was arrested and charged with three murders in Bucyrus, Ohio.

There was no physical evidence linking him to the crime, but he spent 28 years of his life in jail, some of it on “death row,” before Ohio Governor Ted Strickland commuted his death sentence to 2010 after new evidence presented by his lawyers emerged.

Although there are doubts about his guilt, he is serving a life sentence without the possibility of parole.

The Kim Kardashian Podcast on Spotify

The Kardashian podcast, which comes in the form of interviews with Keith, discusses whether he was treated fairly by the justice system.

Read:  This will be the new History logo for Latin America

“I’m very hopeful about this podcast, because I think getting your story out there is so important for people to understand that our judicial system is so screwed up,” Kardashian says in conversation with Keith on the premiere episode.

Kardashian explains on “The System” that the idea for the podcast came about when a producer told her about Keith’s case a few years ago, and since then she has decided to shed light on what happened to her, she publishes Variety.

At the beginning of each episode, “The System” informs listeners that the podcast “contains adult themes, including sensitive material, and is intended for adult consumption only.”

The Kim Kardashian Podcast, in this link.

The launch of Kardashian’s podcast this Monday, October 3, coincides with the SEC’s announcement of a settlement reached by the influencer to pay $1.25 million in fines and interest for undisclosed promotion of the EthereumMax cryptocurrency. that he had been paid to do it.

Shark Tank Shark: “Buying land in the metaverse is the dumbest thing”