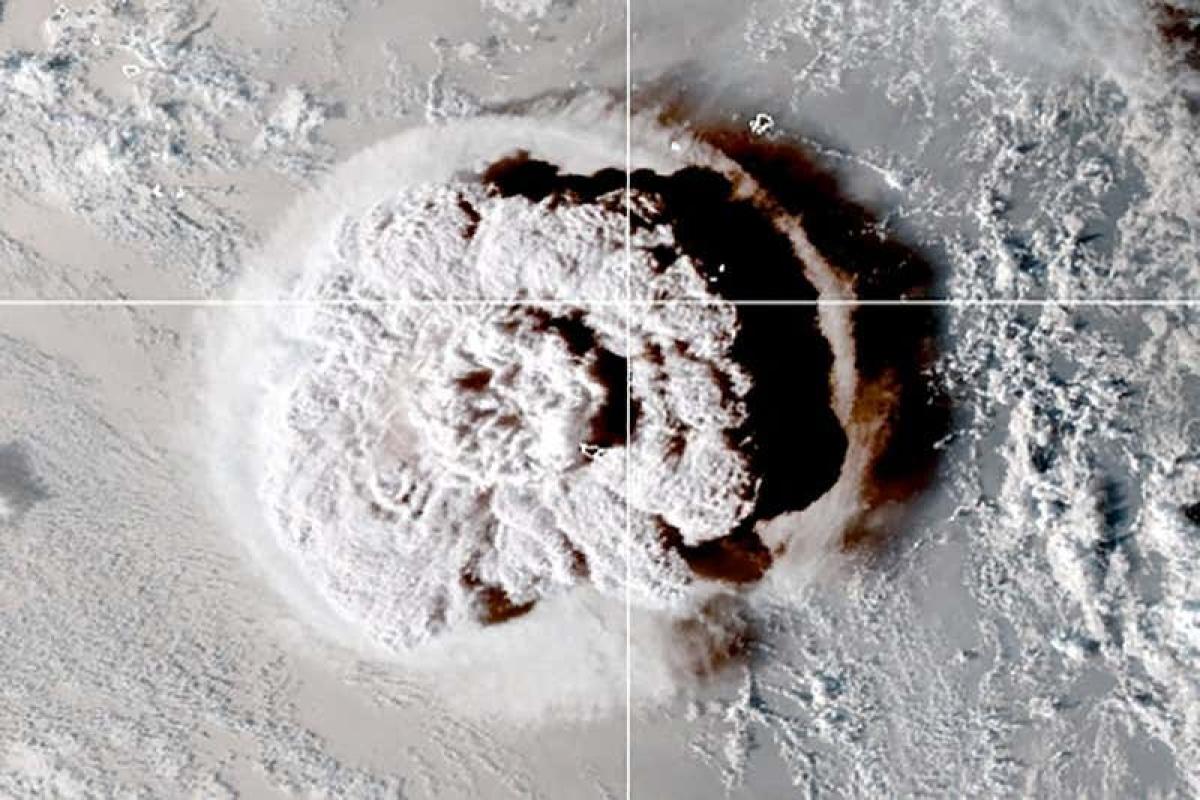 On January 15, one of the most brutal explosions of the last millennium occurred. Satellites have captured it in all its splendor.

The Hunga Tonga-Hunga Ha’apai submarine volcano, situated in the tongan archipelago, in Oceania, exploded violently on Saturday, creating a mushroom of smoke and ash hundreds of kilometers.

The tremendous sonic wave generated created a tsunami that affected China, the United States and South America, causing 2 deaths in Peru, thousands of kilometers from the volcano.

the sonic wave was heard 9,000 kilometers away, in Alaska, and around the volcano there were 400,000 lightning bolts. Acid rain has not been ruled out. Here you can see the incredible explosion, captured by satellites:

The Hunga Tonga-Hunga Ha’apai underwater volcano is almost completely submerged in the ocean, except for about 100 meters that stick out, forming an island. Total measures about 1,800 meters, and has a size of 20 Kilometers.

The explosion recorded last Saturday It is one of the largest since the year 1,100, and the most brutal ever recorded live by satellites.

If you want to buy a drone with a camera, this market has not stopped growing and it is becoming easier to find a model within your reach. We show you the best.

The great luck is that it happened in the middle of the Pacific Ocean, in an uninhabited area. If it had occurred in a populated area, it could have caused thousands of deaths.

Here we can see the huge explosion in the place where it occurred, compared to Australia, and its size relative to Europe. It occupies half of Spain!:

Read:  Android 11 will not show the cover of the song we are playing on the lock screen

The ash cloud reached 30 kilometers in height, and when it reached Australia, dispersed, It was 3,000 kilometers long.

As we have commented, the sonic wave caused by the extension reached 9,000 kilometers, heard in Alaska without the need for an instrument.

In this video you can see how it is heard in Fiji, 1,000 kilometers from the volcano:

Tonga is an archipelago made up of more than 170 islands, most of them uninhabited. But more than 100,000 people live here.

Luckily the volcano island, and all the nearby ones, were deserted. Literally, the island has disappeared after the explosion:

Now the big concern is that large amounts of sulfur dioxide have been detected in the atmosphere, which could produce acid rain that would affect crops and drinking water from some nearby inhabited islands.

The incredible explosion of the Hunga Tonga-Hunga Ha’apai reminds us that volcanoes are the most destructive force in Nature.

They know it very well on La Palma, and it has been demonstrated again in Tonga. We talk a lot about meteorites, but there are forces inside the Earth that could cause a similar catastrophe, without us being able to do anything.

Will the release date for Fall Guys on Xbox be announced today?

The Sun in a box: this is MIT’s revolutionary thermal battery