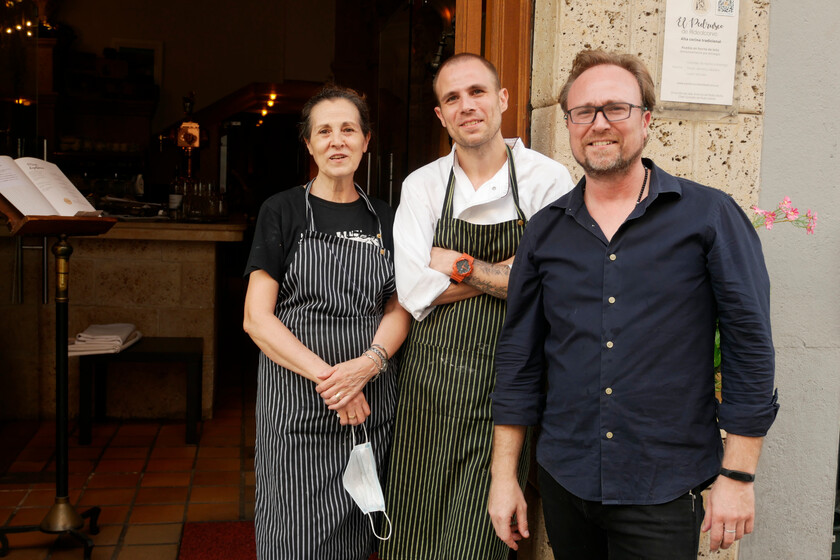 It was 1984 when the marriage formed by Antonio De Pedro and Sagrario Meño inaugurated El Pedrusco de Aldealcorvo, in the Chamberí neighborhood. The family took to Madrid, stone by stone, a old bread oven from his town, Aldealcorvo (Segovia), and began to roast lambs and piglets without rest.

Was the golden age of steakhouses, when the gothic letters, the wood oven and the reserved rooms with cigar cellars made the honeys of Madrid’s business elite. The kind of places where characters like Jesús Gil or Lorenzo Sanz felt comfortable closing deals.

The menu of these steakhouses, which they were counted by the dozen in Madrid, It did not come out of the predictable: picadillo, chorizo ​​or blood sausage for starters; suckling lamb or suckling pig accompanied by a second salad. To finish: flan, cigar and glass.

Nearly 40 years later, most of these restaurants have either closed or been stuck in the 1980s. Some still make lamb good. Others not even that. But few like El Pedrusco de Aldealcorvo have known how to reinvent themselves without losing their essence. Something to thank the second generation of the Pedro Meño family, Gonzalo and Antonio –in the kitchen and living room respectively–, who have taken over the family business without resting on their laurels.

The lamb, at its perfect point, has a crisp skin and a juicy interior. It is served in rooms to order, but it is also included in the tasting menu in which it alternates with suckling pig.

The stars of Pedrusco are the suckling pig and the lamb. The latter is the best a server has ever tasted in the capital: super tender, very tasty and with a crispy skin. Perfect. The lamb, from Amaro group (one of the best suppliers of churra suckling pig, based in Riaza), it is only cooked with water and salt, with oak and pine wood, as required by the canons.

The difficult thing when it comes to making a good suckling pig is catch the point in the oven, but the De Pedro brothers have it very piloted. “We have roasted since we were children with my father, especially my brother, who just by putting his hand in the oven already knows if you can put it in or not”, explains Gonzalo. “We don’t have a thermometer and then it’s an hour and a half or two ”. 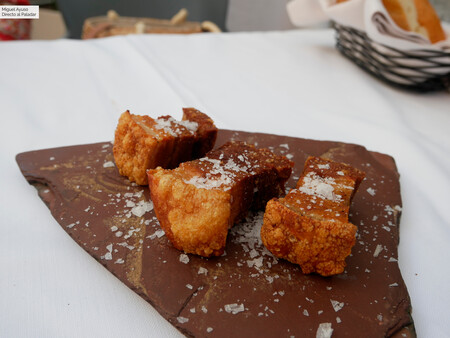 Meals at El Pedrusco usually start with some torreznos cooked in the oven, in a different style from the Sorianos, which are now in fashion, but also remarkable.

The Pedrusco menu is completed with a good set of traditional dishes that Sagrario, who at 69 years old continues to work in the kitchen, embroider: chorizo ​​in the pot, stuffed peppers, baked torreznos – nothing to do with the typical ones from Soria, but very good -, beans from the farm …

If I only had the menu, El Pedrusco would already be a recommendable place – everything is great – but thank God that Gonzalo convinced his brother and mother to cook, in addition, a tasting menu (at 60 euros), in which to unleash your most advanced ideas. 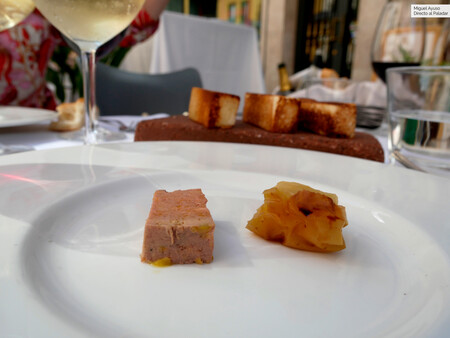 Foie marinated with muscat and pippin apple with sugar and brandy. Behind, a brioche bread to accompany.

A grill with a tasting menu

Both Gonzalo and Antonio started working at the grill from a very young age, helping especially with kitchen work, but Gonzalo was clear from the beginning that I wanted to go to the kitchen.

“The idea that I have always had since I started is to stand out, not among the restaurants in Madrid, which I hope, but among the steakhouses”, explains Gonzalo. “I have always gone with my father to eat at the steakhouses in Madrid and he was jack, horse and king. My intention has always been that, to have the grill, but that they also know you for a cool kitchenIt cost me a lot to convince my brother and my mother to put the tasting menu ”.

Read:  Quick and uncomplicated recipes on the weekly menu for September 13

For a time, Gonzalo combined his work in the kitchen with his position as guitarist in an urban rock group, Vereda, which stopped working after three albums and two tours – and even recorded a video clip in the restaurant itself. “It is 100% incompatible with this”, acknowledges “And eight years ago I left completely.” Of course, in the warehouse of the restaurant there is still the rehearsal room to which it is going to vent between service and service. 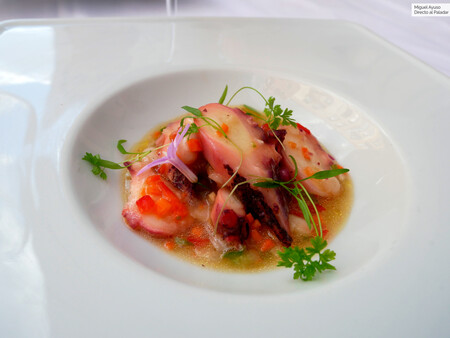 The aki rock lost a guitarist, but gastronomy gained a great chef. Two years after implementing the tasting menu, more and more guests ask for it. And is not for less. During our visit we tried some excellent ham and fried egg croquettes, a delicious salpicón of octopus with beans or an ear confit with brava sauce that will delight lovers of cartilage.

And the jewel in the crown: a tripe meatball (made with the casing of the stew, not just the sauce) which is one of the best bites I’ve had so far this year. A great deal that stems from an original idea by Ana Hernández – a well-known Madrid gastronomic consultant, who collaborates with the restaurant – and that, for sure, they will begin to copy with ease. At the time. 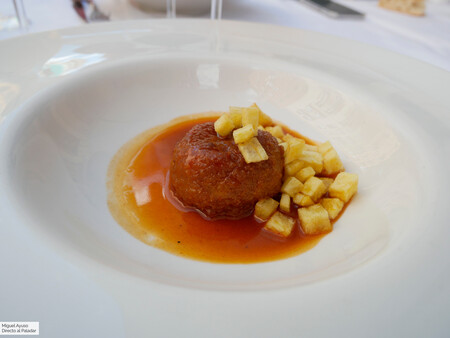 The tripe meatball is a sublime dish.

A menu consisting of traditional dishes, with seasonal products, but in which you can see the twist of a chef who, despite having evolved in a self-taught way, has passed through the kitchens of Coque en Humanes, the restaurant that more done by renewing the typically Castilian recipe book. “Mario [Sandoval] I liked it a lot ”, he admits. “I learned a lot of fineness in plating, kitchen ideas, especially low temperatures, which used a lot. Then I have had a lot of relationship with Diego Guerrero placeholder image, who has come to eat a lot ”. 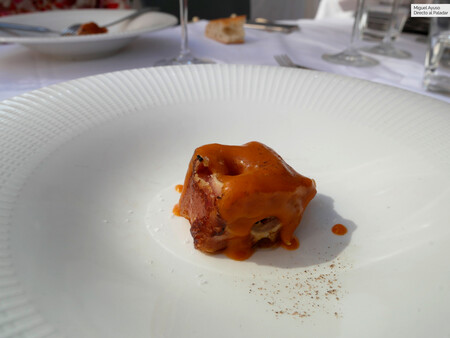 Ear and brava sauce. What more can you ask of life?

There is a good quality price relation

The current Pedrusco proposal is completed with a Appetizing and restrained wine list in prices – with an excellent Arganda del Rey wine that they bottle expressly for the house – and a very close atmosphere, in two rooms that transport you immediately to Sepúlveda, but without falling into the stale (and, for a few months, also , a small terrace).

To end, traditional desserts, among which stands out the Ponche Segoviano. The family brings it from the El Alcázar Confectionery, the most reputed in Segovia, which bills a stratospheric sweet that no one should skip.

Definitely, a steakhouse to return to not only to eat lamb and that, we predict, can give us many joys. 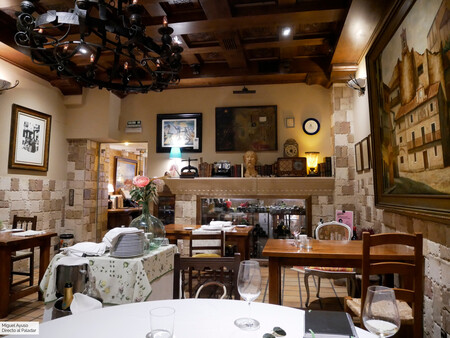 The very cozy rooms of El Pedrusco transport you to a village restaurant.

What to ask for: Although the menu has very rich dishes, it is highly recommended to give the tasting menu a try, which also has excellent value for money. To drink, I recommend trying the house red and white wines, which for 18 euros are more than good.

Mercadona’s slimming pills under review: are they really effective?