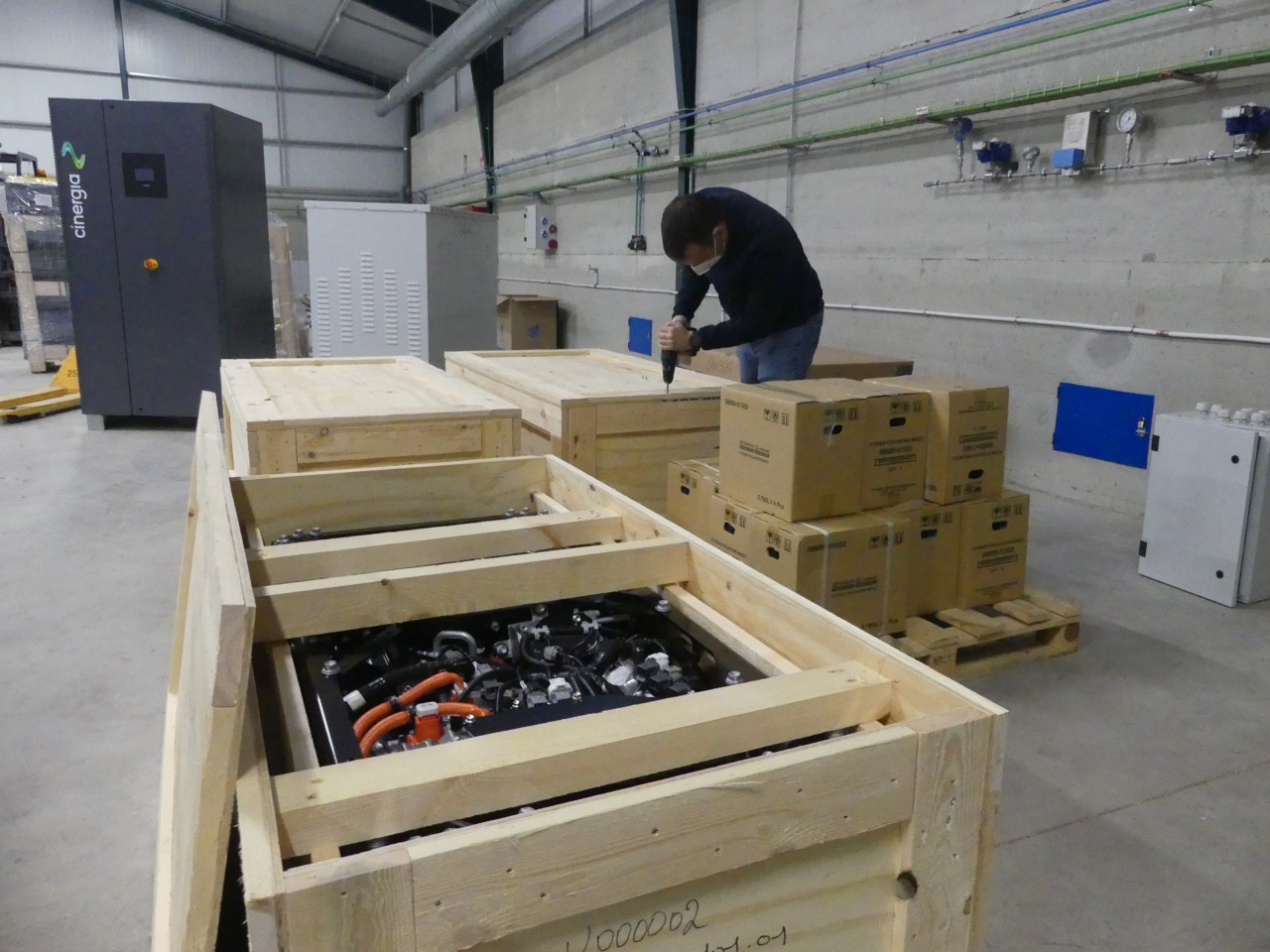 Six Toyota hydrogen fuel cells have arrived in Spain as a preliminary step to their integration into a modified Cercanías train. It is a step forward to dispense with diesel on some train lines, including some of Cercanías, because the tracks are not electrified.

The vast majority of trains in our country run on electrified tracks, but there are still routes where there is no catenary and the trains are still powered by fossil fuels. It’s what it tries to combat. European project FCH2RAIL, get hydrogen trains that do not emit polluting gases or carbon.

This solution would allow hybrid trains that can be powered by the catenary in the electrified sections and continue to circulate on tracks without it. Hydrogen fuel cells convert compressed gas into electricity to power batteries and on-board systems. Toyota is the supplier of these batteries.

Back in April of last year we were aware that the Japanese manufacturer would supply the batteries to the European members of the project, and two of them are in Spain: the National Hydrogen Center (CNH2) and Construcciones y Auxiliar de Ferrocarriles (CAF). Well, Toyota has delivered six units of its modular fuel cells, three each.

The supplied fuel cells belong to the second generation of its modular system, presented in December 2021, and in a flat version. Compared to the first generation, they are more compact, but they give more power, so they have better energy density. These fuel cells are produced on the European continent.

In a first phase, the National Hydrogen Center is going to test three cells together with the batteries in a static way. The other three modules are kept by CAF, and in February the six fuel cells will be integrated into a CIVIA commuter train. These trains do not work in sections without catenary, at least from the factory.

Toyota designed its fuel cells to be “universal.” In fact, tests have been carried out on Kenworth trucks, on the Energy Observer ship, on Sora buses, and there is also a lunar vehicle project. It is not the most pro-electric vehicle manufacturer, but it believes in hydrogen society and in multiple uses of the simplest gas in the periodic table.

Depending on the type of vehicle or stationary application there are various models. It is a modular solution, so multiple fuel cells can be combined for more power. Each individual battery has an integrated DC/DC (direct current) converter.

In their first generation, these fuel cells provide 60-80 kW and a voltage of 400 to 750 volts. If four modules are combined, up to 320 kW can be achieved, but you have to make room for them and take into account that they would weigh a ton (each one is 240-250 kg). We do not have data on the second generation.

It is not the first time that Toyota wants its fuel cells to move a train. In October 2020, Toyota announced a collaboration with the Japanese companies East Japan Railway Company (or JR East) and Hitachi. The latter is responsible for the development of the hybrid propulsion system, Toyota provides the fuel cells and JR East will provide trains to carry out tests with the set.

The operating scheme will be basically the same as we see in the image above. A group of fuel cells receives the power of compressed hydrogen and oxygen (present in the common air) and produce energy. The electricity is routed to the auxiliary system, the power converter for the traction motors, and to the high-voltage batteries.

Do you need a battery train? Yes. First, fuel cells may occasionally not give all the necessary power, but batteries do, so the energy is stored in them as a buffer. On the other hand, the fuel cell cannot work “reverse”, so the energy captured in the braking of the train is injected into the batteries, otherwise it would have to use brakes and waste it.

The FCH2RAIL project began its journey on January 1 last year and will culminate at the end of 2024. It has a budget of 13.3 million euros, of which the European Union contributes almost 10 million through Fuel Cells and Hydrogen 2 Joint Undertaking (FCH 2 JU).

How to squeeze a warranty: 9 engines and 4 gearboxes in 10 years for a Kia Sorento

Melanoma, the skin cancer with the highest increase among young people