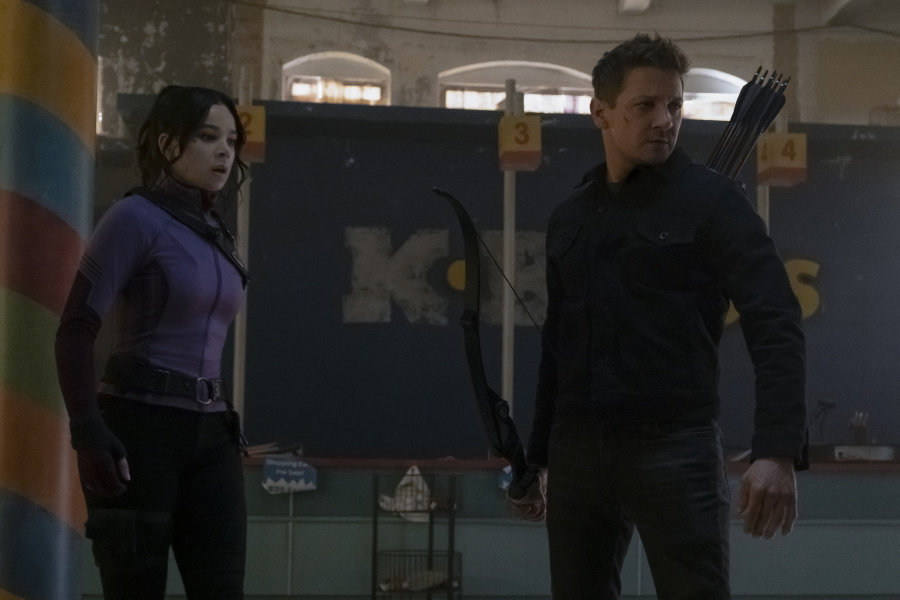 Facebook
Twitter
Pinterest
WhatsApp
Index hide
1 Discover the easter eggs and winks that the premiere of the first two episodes of the Hawkeye series gave us, which is part of phase four of the MCU
2 The Battle of New York
3 Did Obadiah Stane come back?
4 Tigra arrived?
5 Rogers: The Musical
6 The Ravages of Life as Hawkeye
7 Thanos was right
8 Swordsman arrives
9 Lucky the pizza dog
10 What is special about the watch?
11 Is Chabelo part of the MCU?
12 The inhabitants of the building
13 Creature from the Dark Galaxy
14 Grills, Hawkeye’s friend
15 Caudle, Kate Bishop’s ally
16 A special date
17 Echo arrives
18 Hawkeye hits the mark in SMASH and Marvel Comics Mexico
19 It is also being read

Discover the easter eggs and winks that the premiere of the first two episodes of the Hawkeye series gave us, which is part of phase four of the MCU

The Marvel Cinematic Universe features the return of Clint Barton in his solo series, Hawkeye, whose first episodes gave us interesting Easter eggs.

From iconic moments in the MCU like the battles of the Avengers against the Chitauri and Thanos, to nods to the history of Clint Barton and Kate Bishop in the pages of the comics were present in these first episodes

Without further ado, we present to you the easter eggs of the first two episodes of the Hawkeye series.

The Battle of New York

The series opens with a memory of the Chitauri invasion in 2012, where Hawkeye unwittingly saves Kate Bishop after her family’s penthouse is damaged in battle. In that incident Kate’s father Derek dies.

The Battle of New York is the defining event of Kate’s admiration for Clint Barton, as the heir to the Bishop fortune prepares in combat, archery and fencing.

Did Obadiah Stane come back?

Kate Bishop’s first test with her friends is at Stane Tower, which is engraved with a plaque: “The oldest university steeple in the United States. Its cornerstone was laid on October 20, 1725. It was rededicated on July 1, 2006 in honor of Obadiah Stane. “

If the name sounds familiar to you, you are correct, the reference leads us to Obadiah Stane, who was Tony Stark’s mentor after the death of his parents and later ambitioned to stay with Stark Industries, planning the frustrated kidnapping and murder of Stark in Afghanistan. , which would be the MCU’s point of origin with Iron Man.

While Kate prepares to shoot the bell of the Stane Tower, on her cell phone she talks to one of her friends with whom she crossed a bet named Greer, which refers to Tigra (Greer Grant Nelson), who in the comics is become an ally of the West Coast Avengers

What better way to spend time in New York than to go to a musical on Broadway, and the one chosen by the Barton family is Rogers: The Musical, which Clint Barton does not enjoy at all.

Hawkeye notes the fact that the producers included Ant-Man, when in 2012 the mantle of Ant Man was vacant, added to the fact that Clint still does not overcome the death of Black Widow in the events of Voemir within Avengers: Endgame.

The Ravages of Life as Hawkeye

With several years first as a spy for SHIELD and later as a member of the Avengers: Clint Barton’s health begins to be compromised, especially his hearing system, which he supports with the use of a hearing aid that helps him hear more clearly. .

In the 1983 miniseries authored by Mark Gruenwald and Danny Bulanadi, Barton prevented him from being brainwashed with a sonic arrow, costing him 80% of hearing loss due to the resulting outburst. This is why Hawkeye learns sign language.

In one of the urinals of the Broadway theater, one can read a legend that reads “Thanos was right”, so the Mad Titan was not seen as a genocide, but as a savior against problems such as overpopulation and famine.

A similar approach was presented in Eternals, when it is explained that Thanos’ snap delayed by five years the emergence of a Celestial that could end life on the planet. One of the interesting easter eggs in Hawkeye.

Nearly a decade after Derek Bishop’s death, his widow Eleanor has found love in Jack Duquesne, known in the comics as Swordsman, who is one of the men who trained Hawkeye in the art of combat. Jack Duquesne / Swordman by was created by Stan Lee and Don Heck, debuting in The Avengers # 19 (August, 1965).

In this series Duquesne is a sword collector, who seeks to marry Eleonor Bishop, pretending to be a millionaire, but in reality he is bankrupt, and is questioned by his uncle, Armand, who does not approve of his marrying Eleanor Bishop.

Kate and Lucky’s first meeting occurs on the street where Eleanor and Jack announce their engagement. Later, Kate saves Lucky from being run over and takes the dog to his apartment, in what will be the beginning of a great friendship.

In the Lucky comics, he had the same luck as in the series, with the difference that the one who rescues him is Clint Barton, who took him to the vet for medical attention. Lucky works alongside Mew, Squirrel Girl’s roommate’s cat to defeat Taskmaster. (Did someone say Pet Avengers?)

What is special about the watch?

Jack Duquesse and his uncle Armand participate in an auction of items rescued from the Avengers facilities, which was destroyed by Thanos, and from which different items were collected such as the Ronin suit that Kate Bishop later wears, which makes her in the sights of the Sports Mafia.

In this auction one of the most sought after items was a watch, which was marked with lot 256, which would refer to The Avengers # 256 marked with the title Kang’s dynasty, the villain that will be featured in Ant-Man and the Wasp. Quantumania, without forgetting its He Who Remains variant in Loki.

Is Chabelo part of the MCU?

In the second episode, after Clint and Kate escape from the Sports Mafia, which sets Kate’s apartment on fire, they both go to get supplies and medicine to treat their wounds, and in the background a song that Xavier popularized in Mexico is heard. López “Chabelo”.

Although this song was originally written by George Scheck, Rod Parker, and Al Greiner, it was sung in its original version in 1958 by child singer Augie Rios.

The inhabitants of the building

Kate offers her aunt’s (Moira Brandon) apartment for her and Clint to hide, and the names of the apartment building’s inhabitants reveal some names linked to Hawkeye’s history in the comics.

Creature from the Dark Galaxy

As we mentioned earlier, Kate and Clint head to Moira Brandon’s apartment to hide. In the comics Moira Brandon is the name of the retired actress, whose mansion later becomes one of the West Coast Avengers facilities.

Inside is a poster for a fictional movie called The Creature from the Dark Galaxy, starring Moira Brandon and Luke Ballard, who is actually a digital artist who has worked on Marvel Studios productions such as Doctor Strange and Avengers: Infinity. War

Barton realizes that the Ronin suit that was in Kate’s apartment when it caught fire was rescued by a firefighter named Grills, who wears the outfit in a medieval fighting game, prompting Barton to negotiate with Grills for him. return the suit, earning your friendship.

In the comics Grills is a neighbor and friend of Hawkeye, who is killed by Clown, a villain who seeks to finish off Barton.

Another of Kate Bishop’s possible allies who debuted in the series is Detective Caudle, who calls Kate to investigate the reasons for the fire in her apartment.

Caudle is a detective from the Santa Monica Police Department, who is the elnace with Kate Bishop in the comics, so the series could have the same fate.

After Barton is kidnapped by the Sports Mafia, Kate locates him thanks to her tracker, but to enter the system, Bishop uses the password Bishop112012, one of the easter eggs linked to the Hawkeye comic.

This password is special, since it is dated when issue 4 of Matt Fraction and David Aja’s Hawkeye series was published (November 2012), where Kate Bishop is first introduced.

Towards the end of chapter two, Clint and Kate fall into the hands of the Tracksuit Dracula, a gang of mob members who inform the gang leader that the two vigilantes fell into their hands.

The way to communicate with this leader is by signs, which indicates the arrival of Maya López on the scene, who will become Echo.

The first episodes of the Hawkeye series is now available on the Disney + digital platform.

Hawkeye hits the mark in SMASH and Marvel Comics Mexico

Clint Barton, a very experienced professional; Kate Bishop, a talented beginner. Two Hawkeyes hanging out, exchanging arrows, teaming up… It’s not what they think, they’re just friends, the only string that connects them is the bow.

Barton has enough problems with his ex-girlfriend, ex-wife, a “friend” and a redhead with his dream car; plus the army of gangsters in pants who wants the building they bought back and a dog who accumulates problems and has a nose for homicide and a great taste for pizza.

SMASH and Marvel Comics Mexico brings you Hawkeye Vol. 1, authored by Matt Fraction, in a special volume that you cannot miss.