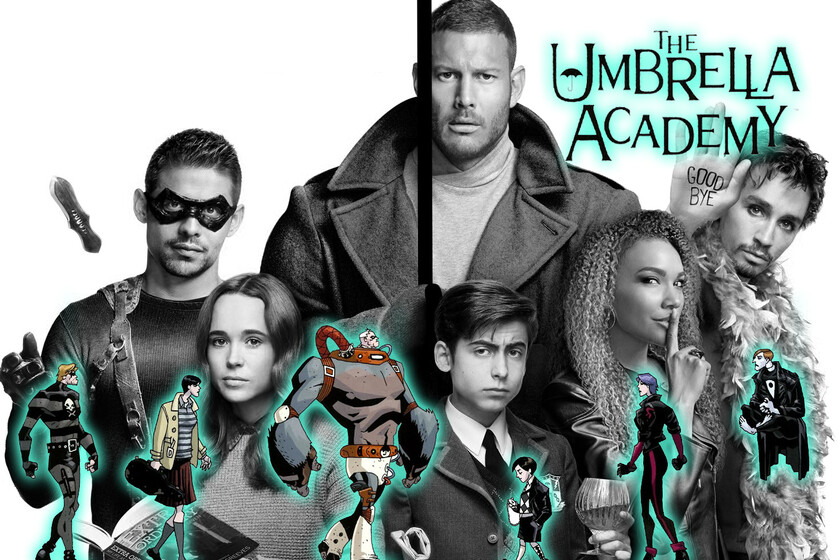 Despite having cut very good series and some notable ones, in Netflix They have felt magnanimous and have decided to give a third season to ‘The Umbrella Academy’. The news would not give much more of itself, were it not for the series has almost completely dissociated itself from the comic on which it is based.

Remember that there will be spoils on one side and the other, but that they are not related to Horror, the character of the academy capable of invoking Lovecraftian nightmares, but with the comic book and adaptation plots.

Index hide
1 The musician who wanted to be a comic book writer
2 ‘The Umbrella Academy’, daughter of a thousand parents
3 Differences between the comic and the series
4 conclusion

The musician who wanted to be a comic book writer

The first thing that catches your eye when opening the comic of ‘The Umbrella Academy’, apart from the excellent drawing of Gabriel BàIt is the overflowing energy that its pages give off. It is also appreciated, if you are a reader of superheroes with certain tables, the love of Gerard way through the middle.

It is no coincidence: Gerard Way may have become famous and a millionaire thanks to his group “My chemical romance“, but before he had already tried to carve out a niche in the comics market as an intern in DC’s Vertigo line, home of the Swamp Thing, Animal Man or Hellblazer, and as a screenwriter.

It is thanks to his times as a fellow that meet a comics legend, screenwriter and magician Grant Morrison, with whom he befriends. It is no coincidence, therefore, that to script his most famous comic, ‘The Umbrella Academy’, he looks at the bibliography of the Scottish screenwriter and, above all, at his stage within the ‘Doom Patrol’ (or Doomed Patrol, as veteran readers know her here).

‘The Umbrella Academy’, daughter of a thousand parents

If this comic had to be classified, apart from as “superheroic”, it would be with the label that I call “pandemonium comic”, that is, characterized by an endless stream of ideas per vignette, something that only this artistic discipline can do thanks to its ability to pour an inordinate amount of information onto the pages and leave the reader to linger on them as they see fit while decoding whatever they want.

As I have told you up there, this aspect of the comic comes from long ago and can be traced back to works like ‘The Doomed Patrol’, ‘The Invisibles‘or’Disgust‘by Grant Morrison,’The Adventures of Luther Arkwright‘ from Bryan talbot or the works of the most unleashed Jack Kirby, that of the Fourth World for DC and that of the return to Marvel in the 70s with ‘The Eternals‘or’Man machine‘.

One of the inspirations of ‘The Umbrella Academy’. The extravagance comes to him from the spiritual father …

They are comics that need rereading and some rest to digest what happens in themWhile they run the risk of sacrificing character development in favor of action and quirkiness… something that happens a lot in this ‘The Umbrella Academy’.

Be careful, that does not mean that it is a bad comic and proof of this is the favor of critics and the public, but it is true that, sometimes, you cannot build a personality with four phrases, a curiosity and an extravagance.

Gabriel Bà, for his part, throws himself into the ring with the same enthusiasm, very capable of keeping up with a screenwriter who asks him to draw an Eiffel Tower taking off as well as a makeshift torture room inside a cafeteria; an elegant jumpsuit that does not clash between children in uniform and assassins with the heads of cartoon characters.

How to adapt this chaotic symphony? Well, passing her, of course!

Differences between the comic and the series

And we finally got to this point. As the “pandemonium comic” is unadaptable per se, it must go to the big screen distilled. It is not necessary to take all the ideas developed, but the most important ones for the story while carefully scrutinizing which parts may grow differently. And how has this process been carried out in the Netflix series?

Gerard Way and Gabriel Bá do a great job of characterization based on small brushstrokes (one in the dialogues and situations, the other in the character’s bearing and his way of moving in the vignettes) and still fall short. Let’s further say that some ideas work best in the superhero reader by honoring pillars of the genre like the X-Men. The series does an even better job, although it is less repetitive by having to fill so many chapters of between forty minutes and an hour.

Gerard Way does very well in the comic, but together with Bà they pull by the default options for everything: all the protagonists are white and, ahem, they have an Indian servant because this is England. It’s more, the colorist has more work on the pages of the comic to color impossible machines or chimpanzees than different skin tones.

Netflix, with its successful policy of diversity, is betting on the obvious: that Hargreeves children have different backgrounds and, therefore, different nationalities and races.

Not to mention sexual inclinations as well, something that will be interesting to see how Netflix approaches Vanya, Elliot Page’s character, who is bisexual on screen in the face of vagueness: Violin Blanco is not that memorable, in the comic, beyond his iconic suit.

The comic is set in England and the most current time represented is the 80s, not by chance the year of boom of English screenwriters in superheroes and the appearance of works such as ‘Watchmen’, ‘Miracleman’ or the headlines that made Grant Morrison famous.

As they usually do in the United States, when adapting they have taken the action to their own country, which makes it even more obligatory to show that diversity mentioned before. And the time is the current one (although then it gets messy and good).

What the comic sins of concrete, the series makes it of derivative, especially in the first season. As I have said, the cartoon of ‘The Umbrella Academy’ is a machine gun of concepts and there is no room for anything other than cool ideas in a parade of three. The series, for its part, accuses those chapters of almost an hour. The solution? The middle ground, hence the second season is much superior to the first.

Like good superhero comics, the Hargreeves brothers have to fight different and crazy enemies, from a crazed Gustave Eiffel to robots activated when the brothers get together again, passing through the statue of Abraham Lincoln, the murderers Hazel and Cha Cha or the Temps Aeternalis agency.

Who does not know Gustave Eiffel zombie, prays to any goldfish

In the series, however, the threats are more mundane: a resentful Leonard, along with Hazel and Cha Cha, in the first season and the Commission (the Temps Aeternalis of the comic, passed through the filter of the Ministry of Time), along with the Swedes (and some surprises), in the second. No fancy threats, just more mundane (and cheap). At least they’ve left Carmichael, everyone’s favorite anthropomorphic exoskeleton fish.

In its extravagance, the world of comics is quite cruel: in the first miniseries, robots make a declaration of intent by setting fire to a living uncle with children; in the second, Hazel and Cha Cha are not sympathetic professional killers, but sadists to the point of torturing a cook the unspeakable for a recipe. It goes according to the tone, that It pretends to be a twisted version and an emo point of superheroes, but in the television series it had no place. And almost better.

A shame, yes, not to stop the Kennedy assassination like in the comicBe careful, gut: blackmailed by the Temps Aeternalis, Rumor impersonates Jackie Kennedy and lets the president know that he has heard the rumor that his head is going to explode. Sparkly.

The comic is very wacky and that’s great. There is the white violin, with its very tight violin-like suit, the intelligent chimpanzees that populate the city and even help the police, the Martian apes … None of that is present in the series, which is a bit sad, because it would have served to differentiate it from other superhero series and avoid similarities with, for example, the Marvel Television Universe.

On the way to the screen a comic usually shines an actor who takes the role like it’s the last he’ll ever do. Who knows how to glimpse the nuances of the original and, together with the script, pulls out interpretive muscle.

Almost, almost, I would also add Elliot Page because his Vanya, in the comics, has little flavor beyond “the traitor from within”, but it is that Robert Sheehan eats the stage as he has not done since … well, since ‘Misfits ‘ nothing more and nothing less. That in the series ends up founding a sect? Boy, seeing him on screen, it doesn’t surprise me in the least.

The differences between the comic and the television adaptation go back to the strengths and weaknesses of each medium. The art of a comic is limited by the imagination of its authors and uses the cadence of the reader; The art of a film has restrictions (you cannot show everything you want, or if it is shown it cannot be done with a limited budget) and you must coordinate the visual and the sound.

Here it seems I’m singing the boatman’s truths, but it never hurts to remember it to avoid, for example, that the precious monologue of Doctor Manhattan in Watchmen becomes a lead piece, saved by the hair thanks to a couple of shots and the best piece of the film’s soundtrack .

Come on, unlike ‘The Boys’, where the series is much superior to the comic on which it is based, here it is more difficult to reach a conclusion, A thousand ideas in a beautiful packaging or a few developed to the end under a somewhat pedestrian appearance?

Maybe the answer was clear if I was based only on the first season of ‘The Umbrella Academy’, but the second goes beyond the comic, with a successful chapter length and a more dynamic development. I’m sorry for Way, adaptation wins by the hair although, who knows, he may win a rematch with his Sparrow Academy …