Bullfrag
Home Entertainment the day of shit puts Masha against the sword and the wall... 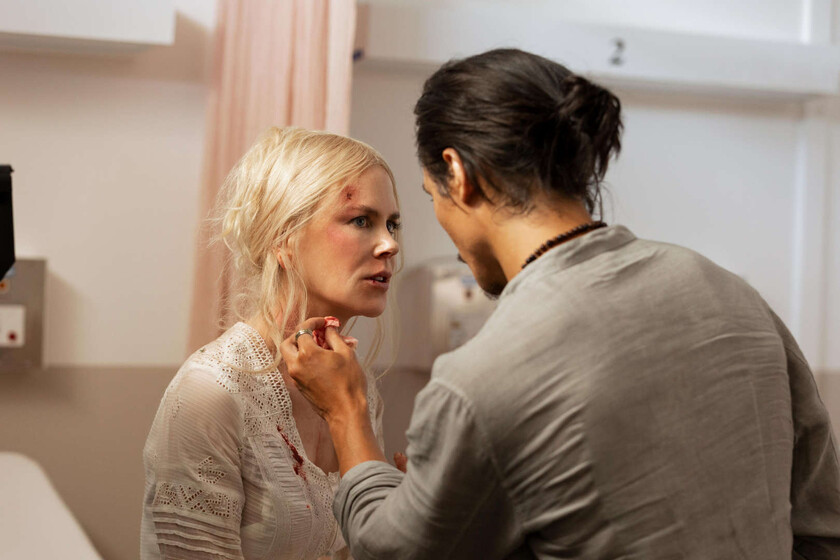 Every year I organize a summer camp. And every year there is a day that overtakes us, either due to fatigue or because there is some powerful unforeseen event: colloquially and due to the day it usually falls, we call it “shit wednesday”. In the seventh episode of ‘Nine Perfect Strangers’ we have reached that fucking day of Masha.

In other words, it is an episode that shows the day when the situation far exceeds the control that the mystical ruler of Tranquillum can exert. But before we get down to business, a notice of SPOILERS.

‘The wheels of the bus’, named for the song it sings Jessica (Samara Weaving) begins with the memory of the tragic accident that took the life of the daughter of Masha (Nicole Kidman). A memory interrupted by the Carmel’s psychotic break (Regina Hall), who launches to attack the director of the center.

Running to put out fires

This fact will not be but the first of the cracks that will appear in the episode. A concatenation of circumstances that will put Masha in fear that everything she has worked on so far will go to absolute shit: chaos.

Chaos. But also the nonsense. For some reason David E. Kelley’s libretto fails to order everything that is happening in a way that goes beyond Kidman’s character going from one place to another trying to resolve a crisis. If, in addition, we add to the fact that the rest of the characters seem to be going around the same thing (with more information, yes), the episode does not finish working.

Lars (Luke Evans), for example, seems more interested in telling the story than in unveiling what you know and could help others. It is revealed in this episode that someone died at the hands of Tranquillum. Delilah (Tiffany Boone) has decided that this far can be reached and the Marconi are so “hot dogs”.

We have already talked more than once about how ‘Nine Perfect Strangers’ explores the relationship of codependency (and toxicity) between the characters, who become followers of Tranquillum. This often justifies the things that we are seeing as the characters develop, but sometimes it falls into redundancys.

Which is not that this episode does not have great moments. Seeing Frances (Melissa McCarthy) on the edge of the cliff opening the channel before Masha is, without a doubt, one of the most inspired moments (and even humanizers) from ‘Nine Perfect Strangers’.

With Carmel putting Masha and Delilah before the sword and the wall On the run, presumably looking for the police, the series promises a final episode with plenty of action and answers. We’ll see if it doesn’t disappoint.