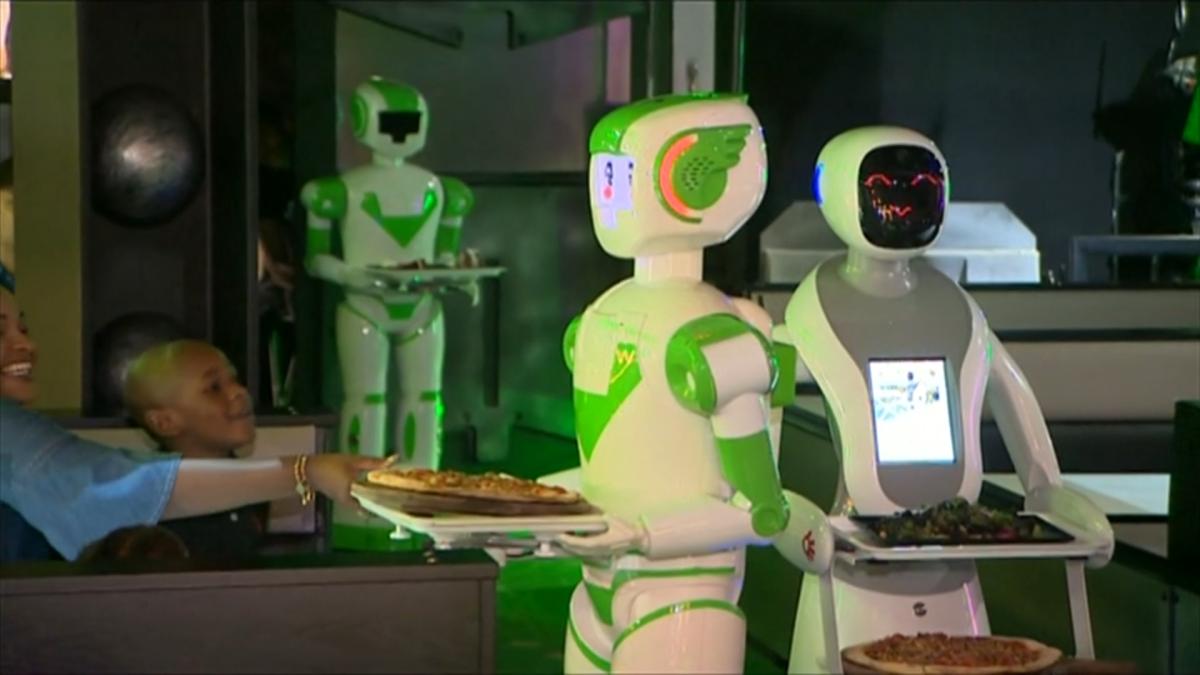 In the UK restaurant Robotazia, four robot waiters work. Their bosses reveal some curious limitations, and why they prefer humans.

In recent years we have seen a great deal of robots who perform tasks that until recently were reserved for humans: prepare food, wait tables, clean, deliver orders, etc.

Its manufacturers, of course, praise its advantages: They do not receive a salary, they do not complain, they do everything you ask, they work 24 hours a day … But these robots also have their dark side.

Robotazia is a British restaurant located in Milton Keynes, and dedicated to science fiction. There you can find dozens of robots on display, but four of them are authentic waiter robots that pick up orders and deliver food to tables:

These robot waiters, named Amy, Ella, Will and Josh, they can talk to customers, they are always smiling, they have infinite patience, and they do not charge.

But her bosses, Joy Gittens and Mark Swannell, who own the restaurant, recognize journalist Kate Duffy from Business Insider that they will never replace all waiters with machines, because “human engagement is still a wonderful thing. It’s the warmth of that person who says, ‘How are you? Thanks for coming to Robotazia“.

What’s more, these robot waiters have some curious drawback They do not show us in the videos of the manufacturers.

For example, the owners of the restaurant explain to the journalist that their robots run away from people wearing a lot of jewels.

Apparently jewelry produces reflections on your vision system, and they make them interpret it as an obstacle … turning around and retreating.

Read:  How to Download Telegram on Android, iPhone and PC Windows and Mac - Step by Step

This forces human employees to be vigilant so that robots do not serve heavily jeweled people.

Another problem is that robots attract too much attention, and they tend to slow down the delivery routine.

They have the ability to talk, but the owners ended up disconnecting this feature because they spent a lot of time talking to customers, on their own.

That is to say, It wasn’t the customers who talked to the robots, but the other way around… And even being mute, they are slower working than humans.

You also have to take into account the battery. When they detect that it is low, They go back to the charging station … even if they are in the middle of a food delivery.

This gives a bad image, because the customer is waiting. And it does not matter if the place is crowded or there are no more waiters … They return to the charging station and They are inoperative for a few hours.

Although they do not charge and do not have health insurance … there is a significant expense in maintenanceBecause the robots get out of adjustment, they hit the tables … Mark Swannell says that every Tuesday he has to perform maintenance on the robots.

At the end, each robot is assigned a human employee who complements it, so the work is a bit reductive. They work there because of the theme of the restaurant, not because of their skills as waiters.

All that glitters in the world of robot employees, but surely these limitations are not slow to be overcome …

They reveal how they place cameras in rooms