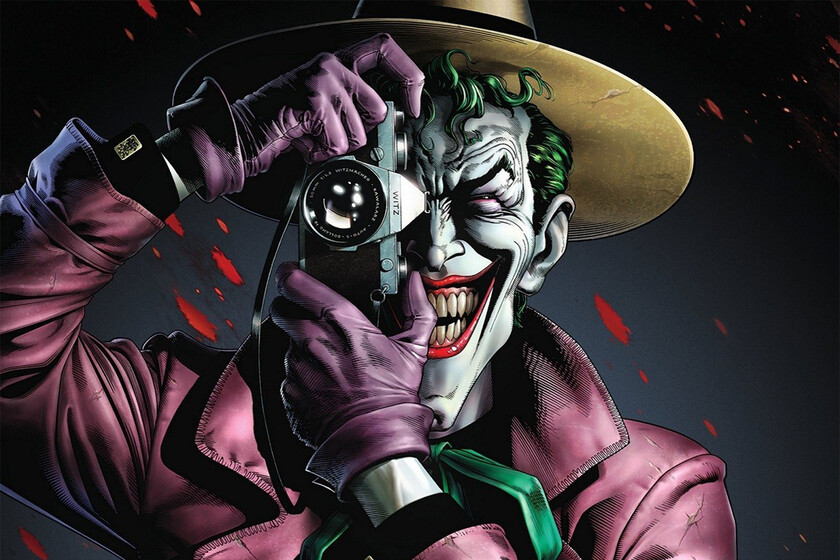 The kings have been good to me again this year. Among the gifts has appeared ‘The Killing Joke’ by Alan Moore and Brian Bolland, one of the best Batman stories that stands out for its cover, the one in which the Joker appears taking a photograph. And what you see is not good.

Right now my house is flooded with sleeves. And it’s made me remember how I liked Marvel and DC when I was so much younger. From so much going to the stores today I have seen again the comics that I ended up throwing away and it fills me with nostalgia. So I have asked for the ones I remember the most or the ones I didn’t read at the time.

I was always intrigued by ‘The Killing Joke’ with the cover of the Joker taking a photograph with a small SLR camera so eighties. This story by Alan Moore – the author of masterpieces like ‘Watchmen’ or ‘V for Vendetta’ – is very hard, not suitable for the youngest.

His cover stuck with me and may be one of the most reproduced in history. However, there is something strange about her. And surely you have had it in your room if you like photography and comics.

The confusing cover of ‘The Killing Joke’: Portrait or self-portrait?

In the new edition they tell and develop the story of this unique drawing by Brian Bolland (which is also colored by him in this edition). Photography serves so that the evil enemy can inflict the most cruel pain possible.

The drawing took up the entire original cover, something that has been lost in the new edition. It’s the Joker taking a picture with a camera from the 80s. He holds it upright, so that his sinister yellow smile and narrowed left eye can be seen. And it clearly says: ‘Smile’.

The original cover in Spain

Read:  The video courses that we can give to our family photographers

His smile, thanks to the red color, remains etched in our minds. You are taking a photograph of something sinister, you are hurting just for the sake of doing it. If we look closely, on the back cover he appears with the camera around his neck and dressed as a tourist. It is one of the cartoons that advances one of the most violent and perverse acts that we have been able to read in our life.

The cover of the latest edition

The most curious thing is that the cover, according to Brian Bolland himself, part of a photograph, with a hat and a short-sleeved shirt. And he holds the camera in a somewhat special way.

He says it is a self-portrait and does not hold the camera in an orthodox way, of course. He must have seen no other way to show the murderer’s face. But Brian is a cartoonist and says something that is not true.

Ensures that he shoots with the thumb of the left hand. For the record, I often get confused, but all cameras have the shutter button on the right, so your statement is impossible. I have stood in front of a mirror to simulate the self-portrait to confirm my theory (I always mess with these things).

If it were a shot in a mirror, I would be taking the picture with the thumb of the right hand and the index of the left is placing it on the sensitivity adjustment wheel of a camera that I do not distinguish (it looks like an Olympus OM or a Mamiya / Sekor ).

However, if it were a portrait, everything we see is correct. The right index finger presses the shutter button and the left hand holds the camera body instead of the lens, a strange way to do it.

The cartoonist confuses a self-portrait in front of the mirror with a portrait someone made of him … Or maybe the Joker only knows how to shoot in another way, who knows …

The latest in solar energy: photovoltaic facades and colored plates

Legend of Mana The Teardrop Crystal will be released this fall