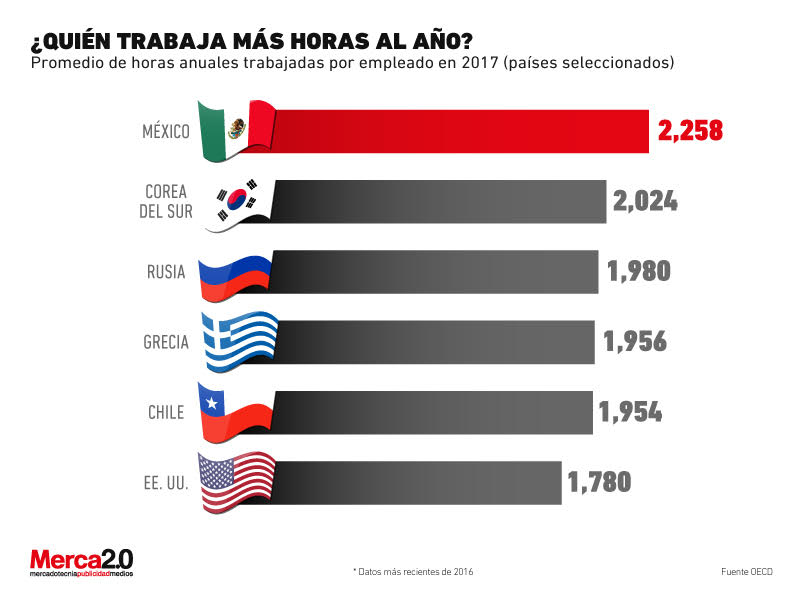 We show you some of the countries where employees work longer hours per day, where Mexico proclaims itself as a leader.

Today there are endless ways to be able to perform at work, either through works manual, artisan, intellectual, qualified, among others; However, the constant evolution of technologies and the emergence of new needs has led to considerable increase in professions focused on the purely digital world, where a wide variety of activities can be carried out focused on providing solutions to different sectors.

Although there are some professions focused directly on working and providing digital solutions, such as content creation in networks social, blogs, sales on-line and other types of businesses, during the pandemic a considerable number of people found it necessary (and the possibility) to adopt the home office as a way of working, showing some advantages and disadvantages (regardless of the aspect of their industry).

Taking into account that a considerable number of people and companies were able to adapt effectively to the work-at-home modality, the needs of employees have been expanding, now being the home office a considerable benefit to consider, which has been well received by the workers.

According to a study by the Internet Association carried out during the pandemic, currently workers no longer feel comfortable enough to go to offices on a daily basis, as 41 percent mention that traveling to their workplace causes them stress due to traffic, people in the workplace. public transport, etc., as well as higher expenses to go to the offices, the work environment is not pleasant and it is more stressful to work in the office compared to doing home office, among other factors to consider that have enhanced this way of working.

However, this type of work has also led to some inconveniences for workers, since some of them have reported that their working hours are not respected and that companies do not adequately respect labor disconnection.

According to Labor Thermometer from OCCMundial, 64 percent of companies consider that working hours are more difficult to respect in some positions, since responsibilities exceed the established working hours; Consequently, their results indicate that more than half of Mexican employers perceive difficulties in respecting the letter of digital disconnection, while only 31 percent think that it is not difficult to enforce this right, since it is not works beyond the agreed times.

“The right to digital disconnection represents the alternative that employees who work under the home office scheme have of not answering any work communication outside of their working hours, be it calls, emails or WhatsApp messages.”

Although employees have the right to digital disconnection, it has not managed to be “accepted” 100 percent by some companies, so the time to work has managed to rise considerably for some people around the world.

Which fiber operator guarantees more and less speed in Spain

Fall in Solana, institutional Aave, Kazakhstan disconnects Bitcoin and much more. A summary of the most important crypto news of the week

It seems that sales of Days Gone are low