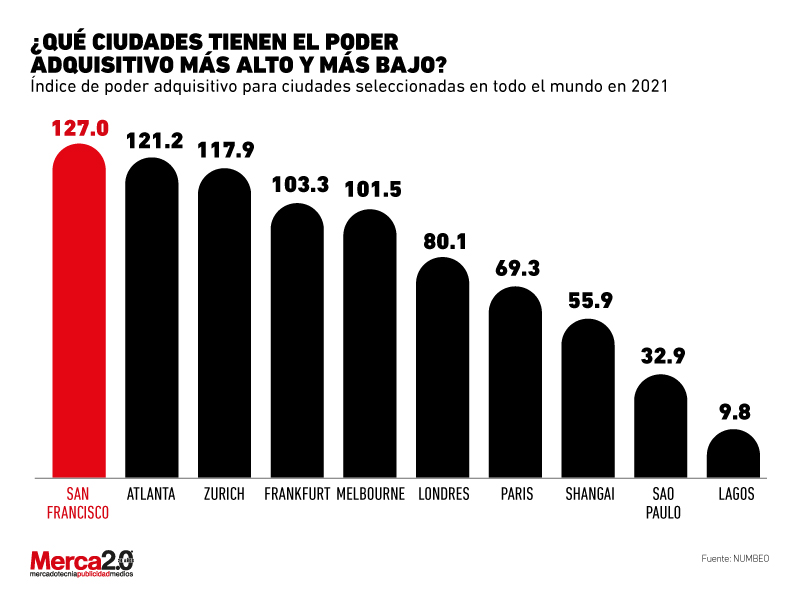 We show you at cities around the world that have a high purchasing poweras well as those with the lowest.

Cities are a type of population settlement with political, administrative, economic and even religious attributions and functions, which differ considerably from the rural entities around them, having an aesthetic of an urban character and even tall buildings, which they can accumulate millions of people inside their streets.

Although countless countries have cities within their territory, there are some that manage to predominate in terms of their population index. According to Macrotrends study on the cities with the largest number of inhabitants in Latin America during 2022São Paulo​ in Brazil manages to lead by registering 22 million 480 thousand people, then Mexico City is located with 22 million 90 thousand people, in third Buenos Aires in Argentina with 15 million 370 my people, Rio de Janeiro in Brazil with 13 million 630 thousand people and Bogotá in Colombia with 11 million 340 thousand, among other opportunities to explore such as Santiago in Chile, Belo Horizonte in Brazil, Guadalajara, Monterrey, etc.

These cities manage to bring together millions of people, registering an indisputable economic activity where big brands can reach their respective audiences, such as those dedicated to the pharmaceutical industry, fast food restaurants, retail, delivery, transportation, etc. , a reality that manages to solve the economy of the families located in them, but having many people walking the streets does not necessarily mean that they register a high capital index.

According to the collaborative database on the world’s largest countries and cities, Numbeo, the United States has some of the cities with the highest purchasing power in the world (despite not being one of the most populated), since during 2021 San Francisco managed to register an index score of 123, where residents can buy 23 percent more products with an average salary than residents of the city of New York, which represents 100 index points; Likewise, below it also has Atlanta with 121.2 points, Zurich with 117.9 points and Frankfurt with 103.3 points.

Read:  The number of Dragon's Dogma players is the highest in 6 years

Despite this, the same study shows the other side of the purchasing power coin, since Lagos has a score of 9.8, São Paulo (which is one of the most populated cities in the world) with 32.9 points and Shanghai with 55.9 points, showing that the number of people in an entity does not necessarily have to be related to its income.

This can be for any number of reasons, but it’s worth noting that since United States, owner of the cities with the highest purchasing powersome of the most important companies in the world have come out.

The United States has the cities with the most powerful purchasing power in the worlda reality that they achieve in part due to their performance and capacity when it comes to doing technological business around the digital ecosystem.

Europeans perceive their cities as cheap, but they are 65% more expensive than CDMX

Chart of the Day: The Rise of the Chinese Economy