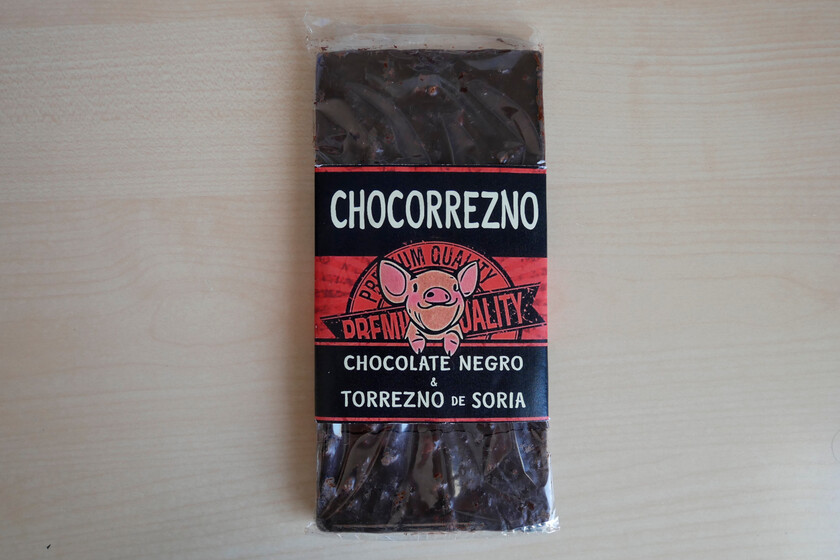 Chocorrezno. Or what is the same, torrezno de Soria with chocolate: an infallible claim for tourists who have visited this summer El Burgo de Osma, where the invention is made, and other tourist towns in the province of Soria. How to resist this wonder of the marketing food?

In the “typical” sweets company El Beato, known for inventions such as Gamusinos or the, not very pious, Nun’s teats, are masters in the invention of traditional sweets. And this new product that, they assure, has had a development of more than two years, is attracting (almost) as many queues as lottery administrations, something almost impossible to achieve in the province.

Of course, we couldn’t resist trying it. This has been the experience.

A (not so) extravagant invention

The Chocorrezno gives what it promises: a mixture of milk chocolate, white or black, with torrezno de Soria, which we find on the tablet in small crispy chunks.

We have tried the dark chocolate version, which seemed the most appetizing, and the experience has been satisfactory.

The chocolate is not great, but it is decent, and the pieces of torrezno provide a crunch and saltiness that goes great, but without greasy flavors, which are removed as much as possible. In fact, I would have liked it to have more presence, as the taste of pork fat is barely noticeable something that, we understand, would have put off some clients (not me). To have a 10% torrezno, the chocolate eats it completely.

Read:  The most advanced laser projectors on the market

The invention may seem like an extravagance, but using pork products in confectionery is a practice that has a great tradition throughout Spain. In this area of ​​Castilla there are many pork rinds cakes, which are still buns of flour, sugar, lard and, of course, torreznos. Those of the Manrique Bakery, also in El Burgo de Osma, they are a landmark of the national confectionery and, since they take home a sweet memory, they are a better option (although they do not attract so many glances).

It goes without saying that this chocolate, that it’s all fat and sugar, raises the calorie counter to unsuspected limits. Specifically, we go to 570.90 kcal per 100 grams, more than dark chocolate or torrezno separately, which do not usually reach 500. Although this, in a product baptized as Chocorrezno, should not be any surprise. We have come to play.

Where to put a water fountain according to feng shui?