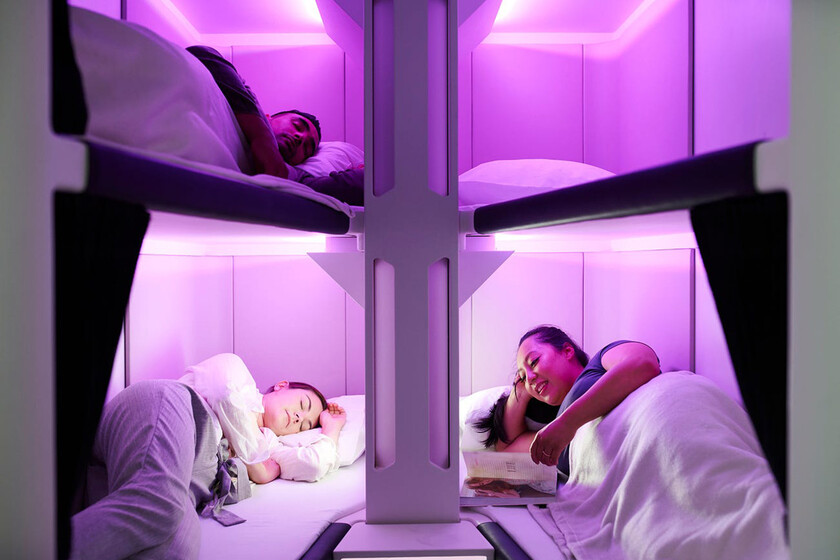 Not everyone can afford a first class plane ticket. And less when it is to travel long distances. The infernal seats with half a meter of separation and padding harder than a stone have been relegated to the middle class. That “comfort” seats sounded like a tall tale when they sold it to us in Iberia. And sleep, nor dream it. Who can sleep on a plane without suffering a cervical injury?

Things have changed. In a bid to spark interest in long-haul flights, an airline company has launched sleeper-shaped “capsules” in economy class. Being comfortable on a plane is now accessible to everyone. Even for the “poor”.

Beds arrive on ordinary planes. Air New Zealand has announced the world’s first “pods” for sleeping on economy-class planes. The concept, called “Skynest”, has been developing for the last five years, in fact, our fellow Trendencias told it some time ago. Now, the airline has given the green light to the product, which will debut in 2024 and will feature two rows of three stacked berths. A total of six capsules to sleep like a king.

The seats are completely flat, made with real mattresses and bedding, and will be located at the rear of the planes.

The conditions. We must comment on several factors that have gone unnoticed by many clients. First of all, the seats will not be included in the price of the ticket. That is, they are a separate product that will have to be paid for separately. And they can only be booked in four-hour shifts: that’s what the airline has determined it takes to allow passengers two sleep cycles (typically 90 minutes), with extra time to wind down and wake up. The crew will then disinfect and replace the sheets in 30-minute slots.

The price. At the moment, it is a mystery. But at least the service will be available to anyone whether in economy or premium class. In fact, Air New Zealand already has a sleeping option called the SkyCouch, which allows passengers to extend the footrests of three seats to effectively widen those seats and turn the section into a makeshift bed. Something that is used especially between families to be able to lie down horizontally in a row that they have reserved together.

Read:  the 'maker economy' has changed the rules of the game


requires too much space. As they only allow four hours, the airline has the dilemma of whether several consecutive sessions can be booked, but it is likely that the demand will not allow it. Basically because in the current Boeing 787-9 there are 248 seats, so many passengers will compete for the 18 available spaces. The problem remains the same as always: lack of space on a plane.

It will work? It is not clear. When the airline announced the concept in 2020, in this CNBC article transportation analyst Seth Kaplan was skeptical that low-income economy passengers would line up to use them. “People who pay the lowest possible fare for a ticket are probably not interested in expensive add-ons. The airline business is a real estate business and Air New Zealand will have to ask itself if those beds will make more money than the seats they would have in that space.”

The future of airlines. It’s not the first airline to recently revamp the amenities on its planes, with lighter designs for longer trips. In May, Australia’s Qantas released more details of so-called “Project Dawn” flights, which will last 20 hours and begin flying in late 2025. For those ultra-long-haul flights, they have announced “zones wellness center” for economy class passengers to move and rest.

How is the Bugatti with gold finishes