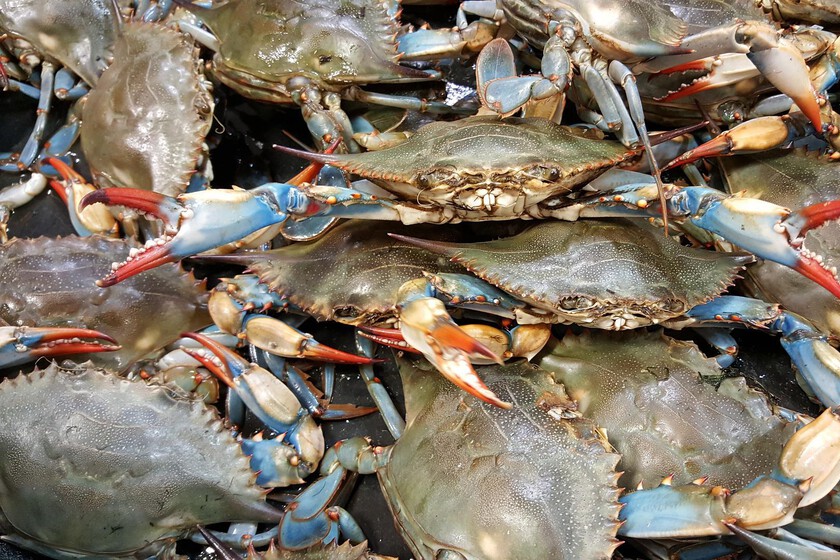 The blue crab is a gastronomic treasure of the Ebro Delta, and although at an environmental level it has been threatening the balance of the ecosystem for some years, and especially the native green crab, its jump into the pot has allowed turn crisis into opportunity.

The career of the blue crab has been, in fact, meteoric and has gone from being a dangerous predator to positioning itself as one of the species currently most in demand at fish auctions in the area and on a plate with a important role in charts of restaurants and on Christmas tables.

Index hide
1 From the Atlantic to the Mediterranean
2 boat passage
3 A sweet and exquisite meat
4 Its fishing and its price grow
5 Protected in the United States
6 safety pins
7 1. More Prades Deltebre
8 2. The Most of Nuri
9 3. Restaurant La Marinada
10 4. Petit Cafe Amposta
11 5. The Unique

From the Atlantic to the Mediterranean

Native to the coasts of the western Atlantic and the Gulf of Mexico, this species was detected by first time in the Ebro maritime zone in 2012. In this habitat, the giant crustacean found a perfect place to stay and develop.

Over the years, the increase in its population has been a constant and the region has found a way out of the problem by placing it on the plate. In this way, this species is already a brand new protagonist of rice dishes, broths, fumets and very varied recipes.

A bowl of blue crab

One of the most widespread theories about its arrival in Mediterranean waters is its passage by ship, through ballast water (used in maritime navigation to ensure the stability of a ship and that usually house and unintentionally transport thousands of invasive species), which were emptied in this area.

This emptying episode would have occurred, according to this theory, in 2012, since that was when the first specimens could be seen in the Tancada del Delta lagoon of the Ebro.

In its early years it was only an invasive species that gave administrations headaches to combat it, and it was not until a few years later that it was consolidated as a gourmet snack whose consumption helps regulate the ecosystem.

One of the architects of the product is the chef with a Michelin star Fran Lopez, who works with blue crabs at his Villa Retiro restaurant. The chef found this crustacean for the first time in the Sant Carles de la Ràpita fish market, in 2016, when it still had a residual presence. López set out to test how it worked in the kitchen and totally hit the target: he was faced with a product full of possibilities.

A sweet and exquisite meat

This crab is very different from the native small green crabs. As a big difference, it is a much larger animal that, at the same time, offers great gastronomic versatility due to the sweetness of its meats. As explained by the marketer Peix a Casa, it has an exquisite flavor and is perfect for making fumets, broths and also to eat simply cooked.

Its meat also works very well in dishes such as the Basque spider crab and even in sauces and rice dishes. However, in the Ebro Delta the presence of this crustacean in the charts occurs, eminently, through the rice.

There are those who compare its flavor with that of the crab, which makes it have enough potential to become a premier ingredient. Actually, this species has the wind in its head thanks to its abundance.

Its fishing and its price grow

According to data from the Sant Carles de la Ràpita Fishermen’s Association, an average of 2,000 kilos are fished daily, a figure that confirms its growth. Last December, the brotherhood found that blue crab catches remained the same compared to last year and that these they had doubled their price. According to the latest data from this association, a kilo is sold at 7.35 euros, a price that has grown by more than one euro in a year.

Six years after authorizing its extraction, the objectives of curbing its expansion are being met

According to data from the Generalitat, fishermen in the Delta and on the Ebro coast have caught up to 5 million specimens since 2016, when their marketing was approved. This amount has been translated into benefits for the sector of 4.5 million euros.

The Generalitat itself celebrates that six years after authorizing its extraction objectives are being met to stop its expansion and to reduce the losses of fishermen due to the presence of this predator in its waters.

In the same ascending line, the blue crab was a delicacy in the past Christmas holidays for which the demand soared along with Norway lobsters, prawns and monkfish. His success was such that even has managed to unseat the galley both in sales and catches.

Protected in the United States

As a curiosity, in the United States this crab is threatened: it is a species so present in gastronomy and with so much consumption, that the country has had to regulate catches to protect it. Who knows if Spain will reach this extreme.

For now, the history of the blue crab in Catalonia has only just begun and its possibilities are multiplying. For example, the Institute of Agrifood Research and Technology (IRTA) carries out a research on new derived products of this crustacean, as a dehydrated one to turn it into a quality product for restaurants and promote it to reach new audiences.

The fullness of the blue crab occurs especially in the Ebro Delta areaso it is the establishments in this area that work best, although we must not rule out other places that have learned to cook it wonderfully.

The rice restaurant and rural house Mas Padres de Deltebre is a specialist in the product of the area. For them, the rice cooking is a way of lifeserved in the midst of great tranquility, nature and landscape.

Lo Mas de Nuri is a restaurant located in the middle of the rice fields of the Delta. Its rustic style accompanies traditional recipes and new rice proposalssuch as those that include blue crab.

The Restaurant La Marinada offers market cuisine on the shores of the Mediterranean, all seasoned with modern touches. Its cuisine is absolutely committed to the territory and, therefore, one of its most outstanding dishes is blue crab rice.

Under the slow food philosophy, this restaurant offers preparations with quality products and zero kilometer. In your daily menus they include rice with blue crab so that everyone can try it.

Self-proclaimed as the restaurant with the most rogue bar on the Barcelona coastthis establishment serves a dry rice with blue crab from the Ebro Delta that it describes as an explosion of flavor for its guests.

Images | The Food Group, DCC Chef Anna, Sintec, Dabbram, Public Domain
In DAP | King crab: what the fashionable shellfish that the Soviets brought to Europe is like and what it tastes like
In DAP | Extreme seafood: the biggest crab in the world is delicious (but to try it you might lose a finger)

Mario + Rabbids Sparks of Hope reveals a multitude of details