The big stores have insisted that you get lost inside them. It’s called the Gruen effect and that’s how it works 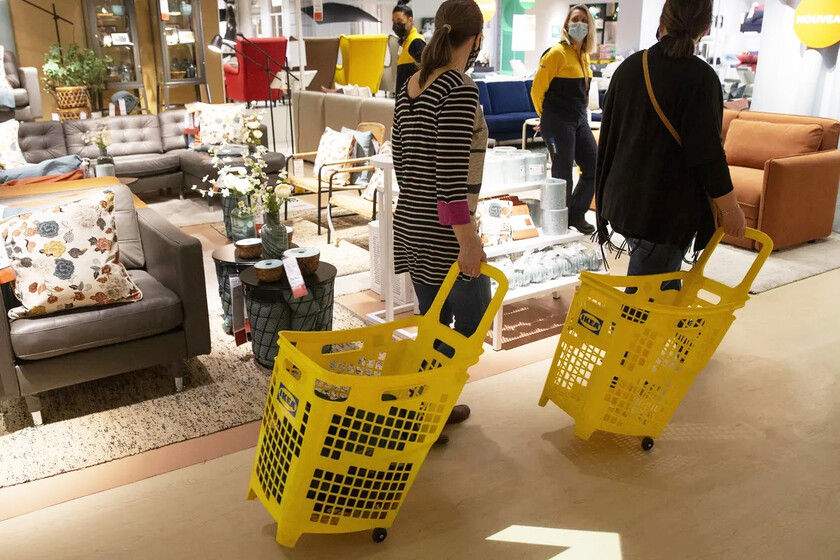 Some interior design and architecture experts have called some malls “jungles” or “labyrinths”. Various users have reported their bad experiences on Twitter when it comes to finding the outlet in department stores such as El Corte Inglés or Ikea. All this leads us to talk about gren effectthat psychological phenomenon that people experience making them susceptible to buying impulsively and that has been deliberately caused for years.

Dropped jaw, slightly glazed eyes, and a sense of confusion are some signs that someone is experiencing it: as zombies, we begin to walk more slowly as this state of mind is established. Some psychologists describe it as an almost paralytic state, in which The mind stops working because it’s logging too much information at once, and it runs out.

In shopping center design, the Gruen effect is very common. In fact, it is named after Victor Gruen, the architect who designed one of the first establishments. Gruen himself did not like the level of manipulation required to create this state of mind and tried to create a mall that did not confuse consumers to buy things they don’t need.

A number of factors come together to create the effect, almost all with the goal of stimulate our senses: the use of specific lighting and sound cues, ambient noise, and the spatial design of stores and displays. Even temperature and humidity matter, as do mirrors and windows.

Designers of modern stores and malls are well aware of the phenomenon, and deliberately create spaces that are designed to trigger this state of mind, as many mall visitors have stated. That’s why they have difficult exits to find or complicated routes to follow so that consumers end up in another section when they want to leave.

How we orient ourselves (and how not) in stores

In 1950s UK shops, the shopkeeper would stand behind the counter and cut a piece of meat if a person wanted meat. Then he would wrap it up and take the money or write a note and the person would bring the purchase to the cashier. When the supermarket was born, they had to educate customers on how to navigate the store and pick items off the shelf without anyone’s help. For that they used example of a librarywith different sections and corridors.

To sell more products, they found ways to get people past the store. For example, placing commonly used items, such as milk, at the other end of the store. Studies suggest, for example, that most people tend to turn right after crossing the threshold of a store. This influences when choosing where to place the items that have more profit margin.

Read:  What are the two BYD models like and how well equipped?

A labyrinth with no way out

Alann Penn, professor of architectural and urban computing at University College London, conducted a study on IKEA after describing his first stay in the store as “being lost in the jungle”: He had gone to the store to buy a mattress for a bed . After a few hours, he left with a mattress and many other things that I hadn’t planned to buy.

As you discussed in your research, the way a store is organized affects the way people shop. And so she decided to study how people interact with space by looking at models in virtual reality to learn how the environment affects behavior. And this explained not only how people get lost in storesbut also why they choose to do so.

“They don’t want you to go through the store efficiently,” he explained. There are three basic areas in an IKEA store: the showroom, the shopping area, and the warehouse. According to his research, in the showroom, the first goal is to disorient a customer into submitting to the store: “They catch you losing you.” You can’t leave until you’ve been all over the place, by which time you’ve filled your basket with unnecessary things.

And impulse purchases matter to retailers: 60% of purchases at IKEA are not things people have on their shopping lists. Store design is the core component of the customer experience strategy, leading shoppers on a winding path through each department and close to each product: “To further mislead buyersthe road swings constantly left and right, and there are no windows through which direction or time can be felt.”

Also, this way you don’t really need a store map, and this is what most shoppers appreciate. They are happy to walk the path that the store has given them. The long walk usually takes you at least an hour, and often an hour or two more, depending on how many people are shopping in the aisle.

By the time they arrive at the store, shoppers are tired and most of them just want to checkout and leave, making them much more susceptible to impulse buying. Decision fatigue leads people to make worse decisions. Because taking them requires energy, and by the time customers get to the checkout line, their neural reserves have already been depleted. “Thank you for your purchase and see you soon.”