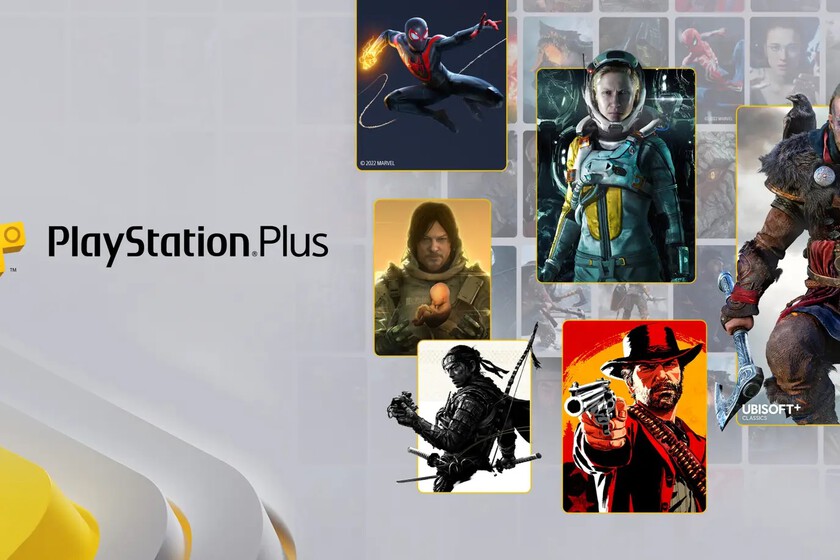 The PS5 is wonderfulbut making the generational leap on PlayStation is not cheap: the price of 80 euros for each novelty makes us more selective than usual when it comes to brand new games, regardless of how much we can write them off. The good news is that thanks to the new PS Plus plans, we will be able to catch up with most of the essentials of the new generation instantly.

Sony has made official the current and classic games that PS Plus subscribers will receive after the change of plans and, along with the Games of the Month, those who bet on the Extra and Premium plans will have access to a selection of games absolutely essential again generation. Some of them released directly on PS5 and others conveniently updated to improve the gaming experience.

And it is that the plans of the new PlayStation Plus subscription are not equivalent to Microsoft’s Xbox Game Pass, but comparisons are inevitable. And, although we won’t see any new releases -except for the surprise of the Games of the Month- the truth is that exclusives like Demon’s Souls or Returnal and Great games of the caliber of Assassin’s Creed Valhalla or the director’s versions of Death Stranding and Ghost Of Tsushima justify us trying to rethink our subscription and give our DualSense the use it deserves.

Be careful, the games offered to subscribers are many more, including great PS4 masterpieces and, in case we opt for the PS Plus Premium subscription, some of the best video games in history. Rescuing them and always having them on hand on our PS5 is wonderful, of course, but if what you want is to try games made to measure for the new generation, we have just what you need.

In Extra Life we have gathered you in one place 13 absolutely essential next-gen games that you must play on PS5 and, in addition, are included in the PS Plus Extra and PS Plus Premium plans. Over a dozen excuses with room for variety to get the most out of the DualSense in captivating adventures or true online or couch multiplayer marathons.

Ubisoft will be one of the greatest allies in this reformulation of PS Plus, and proof of this is that its glorious Viking odyssey will lead this new stage: Assassin’s Creed Valhalla It is the most ambitious and brutal installment of the saga, but it was also one of the ambassadors of the ninth generation of consoles; offering players an open world full of barbarism and adventure. It’s time to turn it upside down!

If you haven’t played Remedy’s latest masterpiece yet, it’s about time you rearranged your priorities: Control mixes action with chaos and puts the result at the complete service of the player through an absorbing plot. And be careful, its definitive version not only rounds out content: looks scandalous on PS5.

Death Stranding brings new perspectives to the traditional and recurring hero’s journey: Hideo Kojima, the genius behind Metal Gear, turns his recurring obsessions into a futuristic dystopia in which it will be the player himself who must give new hope to humanity.

Originally released on PS4, the version Director’s Cut PS5 adds new content, more challenges and, in the process, takes advantage of next-generation technology under the slogan of offering the comprehensive and definitive vision of Kojima’s work.

It doesn’t matter if you’re one of the 12 million Lightless who were lost in the Elden’s ring Midlands or if you know the games of the Dark Souls trilogy by heart, the time has come for you to know or revisit Demon’s Souls, the game that started it all. Or better yet, the brand new Remake that can only be played on PS5.

The sweeping beauty of feudal Japan and the exciting path of the warrior (the bushido) at the service of PS5 technology. The complete and extended version of Ghost of Tsushima rounds off the value of one of the great surprises of the current PlayStation Studios.

A game that captivates due to its plot and its setting, of course, but that conquers due to a combat and progression system that is as fun as it is addictive. Rounding up even more the value of the set in the new PlayStation.

All the barbarism of the Santa Monica saga. All the excellence of PlayStation Studios. God of War It was a direct continuation and at the same time a complete reboot of the history of Kratos, one of the greatest champions of PlayStation.

Talk about God of War It is not only referring to tremendous combats against Nordic beasts, but to a true adventure full of nuances and capable of penetrating the player in a very special way. And despite the fact that there is no version of the game for PS5, it received an exclusive update for the new generation.

Five years later we continue to throw flowers at Aloy’s first adventure, and it is not for less: Horizon Zero Dawn combines the best of open world and adventure games with loads of influences ranging from RPG mechanics to themes set in a sci-fi dystopia where colossal machines have taken over the planet. A perfect candidate to be your new favorite game which, by the way, received a specific update for PS5.

Marvel’s Guardians of the Galaxy

Square Enix skidded and tripped over their vision of the Avengers, but when it came to bringing the guardians of the galaxy to video games left us all amazed and applauded: StarLord and his group of misfits combine Marvel-style action and impeccable storytelling in an adventure as crazy as it is absolutely essential.

Mortal Kombat 11 It’s not just the best installment in the cult saga: it’s one of the best fighting games ever made. Just like it sounds. Extremely brutal, of course, but also with impeccable gameplay, lots of modes and secrets to put it to the test and, as a finishing touch, a tremendous story mode.

The undisputed benchmark of basketball in video games make the most of what PS5 has to offer: load times that last the blink of an eye, visuals that play in a league of their own compared to PS4, and, as an exclusive to the next-gen versions, a colossal social space that spans an entire city. The dream of all passionate about the NBA.

Housemarque pulled one of the first great PS5 exclusives out of the hat. As an interplanetary explorer, we must search for a mysterious signal on an alien planet full of danger. The result: a clever mix of sci-fi, psychological horror, and roguelike elements.

Because in returnal not only will we have to face all kinds of horrors with reverent gunplay, but we will also be trapped in a time loop.

Insomniac Games conquered us with its vision of Marvel’s web shooter on PS4 and revalidated its successes on PS5: Miles Morales takes over from Peter Parker as the protector of New York adding new abilities to those already known from the wall-crawler and starring in their own story. And look at the Next-Gen version, it’s not just a visual leap: you can also feel it in your hands.

Our selection would be incomplete without at least one indie alternative, although The Artful Escape is as much an adventure as it is a musical experience that manifests itself both on screen and to the DualSense.

What Francis Vendetti, We will start a journey of self-realization that will take us through colorful and psychedelic worlds halfway between the known and the fantasy and in which a universal language always prevails: music.

The Wild West has inspired great stories in film, television, comics and even novels; but the definitive Western bears the signature of Rockstar Games. Red Dead Redemption 2 It doesn’t have its own PS4 version, although it was one of the first confirmed games to offer New Generation backwards compatibility and Take Two went out of its way to make the jump to the new PlayStation flawless. It may not use the DualSense or have ultra-fast charging times, but that does not make it any less essential.