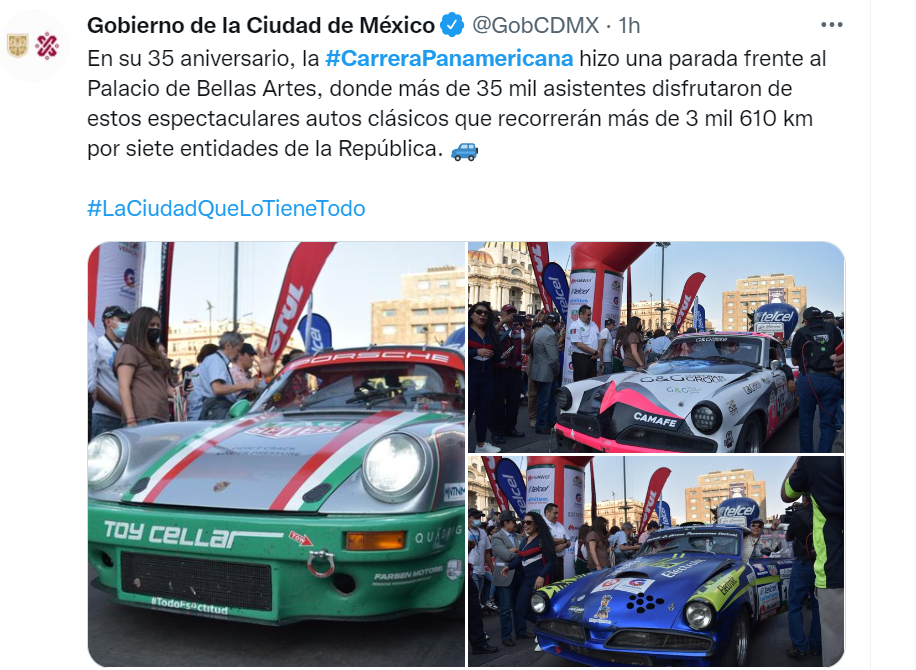 The Carrera Panamericana, at its 35th anniversaryUntil now, he toured various states of Mexico such as Veracruz, Oaxaca, CDMX and Querétaro. Images of their passing through the Palace of Fine Arts and of the attendees in different parts of the country excite the fans of this sport, who prepared for a year for the visit of these classic cars. The route will have a distance of 3 thousand 610 km and will be distributed in seven entities.

With drivers from countries such as England, France, the United States, Canada, Brazil and of course Mexico, the presentation of the vehicles of the Pan American Race 2022 They have been the protagonists of several of the most beautiful and interesting postcards of recent days.

Thousands of fans have lined up early to attend these events. These pass through the most important streets of each city. In CDMX, the event began around 4:00 p.m. and went through the Palace of Fine Arts. At that show, attendees were able to witness the most up-to-date models first-hand.

After passing through the second stage in CDMX, the vehicles arrived in Querétaro, after having passed the first stage respectively on their way through Oaxaca and Veracruz.

The fanaticism for this sport has been such that, of the 65 cars that would parade in CDMX, only just over 20 finished the tour. The rest were diverted due to road chaos. BMW, Porsche and Volkswagen are some of the models that have been presented in this tour.

These are some of the mentions and postcards of the Carrera Panamericana 2022:

TEHUACÁN ALWAYS WARM
WITH THE PAN AMERICAN #Tehuacan | A very special stop on the way to the 35th Anniversary of the #CarreraPanamericanathe Pan American teams crossed the city center surprised by the affection of the people. pic.twitter.com/hB3kAzqOFn

A furro among tuned irons…
For me the most ridiculous:
-The vochos, obviously
-That Datsun pinshi had no mother! 🤘🏽#CarreraPanamericana pic.twitter.com/WQbF8TSvtJ

Thank you very much, @JoacoCaminofor sharing these images of the great and traditional “#CarreraPanamericana“! type automotive event #Rally crossing several states. Made since the 50s and without interruption since 1988… Another great expression of Mexicanness! 🇲🇽🏎️🇲🇽 pic.twitter.com/mqYl9CNy1K

If you are in CDMX and you don’t have much to do, right now you can find the cars of the Carrera Panamericana arriving at Bellas Artes.pic.twitter.com/XlKLM22Njg

Shiver, Czech! The puppy Fabio arrived in his dog vehicle at the #CarreraPanamericana. 🏎️🐾

On its 35th anniversary, the #CarreraPanamericana made a stop in front of the Palace of Fine Arts, where more than 35 thousand attendees enjoyed these spectacular classic cars that will travel more than 3 thousand 610 km through seven entities of the Republic. 🚙#TheCityThatHasEverything pic.twitter.com/K3x0nR4Ncu

New complaint to Ticketmaster; Harry Styles tickets are eliminated a month after the concert

Coppel workers “put on their shirts” and spark discussion on networks

“Anyway, the hypotenuse” Sandra Cuevas hangs a giant sign on a CDMX building

Youtuber explains why there is no forced inclusion in the cinema