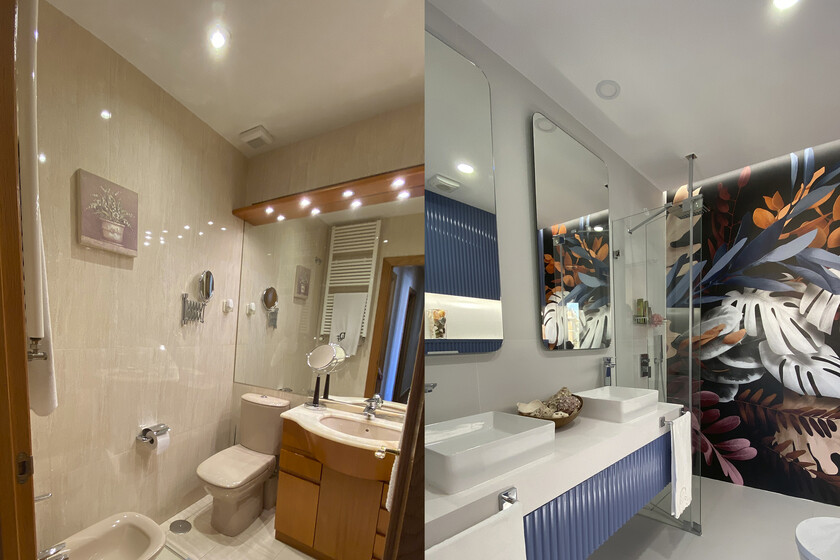 Although we love big changes in bathrooms and kitchens, those in which no renovations have been needed -without debris or distribution changes-, there are times when the latter are necessary to improve the use and make better use of space. Or as in this case, to open the bathroom to another room.

In the Before and After of this bathroom there has been reform with redistribution of the toilets. Even the access door has been relocated and now the bathroom is part of an en-suite bedroom with better access to the bathroom. These changes added to the impressive change of style given by the person in charge of the reform, the Dani Güe interior design studio, has given rise to this practical and very contemporary bathroom full of many of the trends of the moment.

Before the reform, the bathroom had four pieces in the traditional style. Bath, sink, toilet and bidet and everything in a beige tone, including the toilets.

The large bathtub took up an entire wall but despite the large size of the mirror above the sink it was individual.

The bathroom has now undergone a major transformation and has improved its usefulness thanks to the change in layout. Its new access is now located where the bathtub used to be, it went from one sink to two, the bathtub is now an impressive shower and it was also included a toilet with a built-in cistern. The upper space generated by the cistern (approx 15 cm deep) It has been used to generate an extra “hidden” storage behind the wall panels with palillería covering of the wall.

To provide it with more light, as it does not have a window, the access door to the bathroom is a sliding sheet of corrugated glasswhich leads to the main bedroom that enjoys a lot of natural light.

Read:  "it gives us clarity of where we are"

If something stands out in the reform, it is its commitment to the blue color in the furniture and the impressive vinyl of the shower wall. To highlight both aspects, the rest of the elements are very neutral with a large white base.

Following the same criteria of choosing a neutral and minimalist base The partition and backlit mirrors were chosen, without frames and the minimum possible fittings. The made-to-measure countertop is also in white, as well as the sinks, toilet, push-buttons, mechanisms and even the extraction grille. The taps and accessories they were chosen in the classic chrome finish.

In this minimalist environment, the impressive Lokoloko vinyl facing the entrance, on the shower wall, as well as the blue color with which the Orac 3D panels have been painted, stand out without anyone stealing their attention. These panels cover “hidden” doors and drawers in a shade of blue in harmony with the vinyl.

Finally, highlight the “ambient” light in certain points of the bathroom such as in the shower, through a groove in the false ceiling and also in the lower and middle area of ​​the side where the toilet is located.

In view of the result, this comprehensive reform has been worth it because its owners now enjoy a spectacular designer bathroom.

Ikea has a chair that is also a shelf and a towel rack. And your bathroom urgently needs it because it is also...

Fifteen pieces of furniture from Maisons du Monde, of all sizes and styles, for all types of halls, including the smallest

Lidl’s coffee and dessert set that doesn’t look like a low cost chain and that will elevate your breakfasts and snacks on the terrace...

El Corte Inglés has a Vista Alegre tableware at a 63% discount. And it is ideal for eating on the terrace or in...

“Never gonna give you up” revives 35 years later