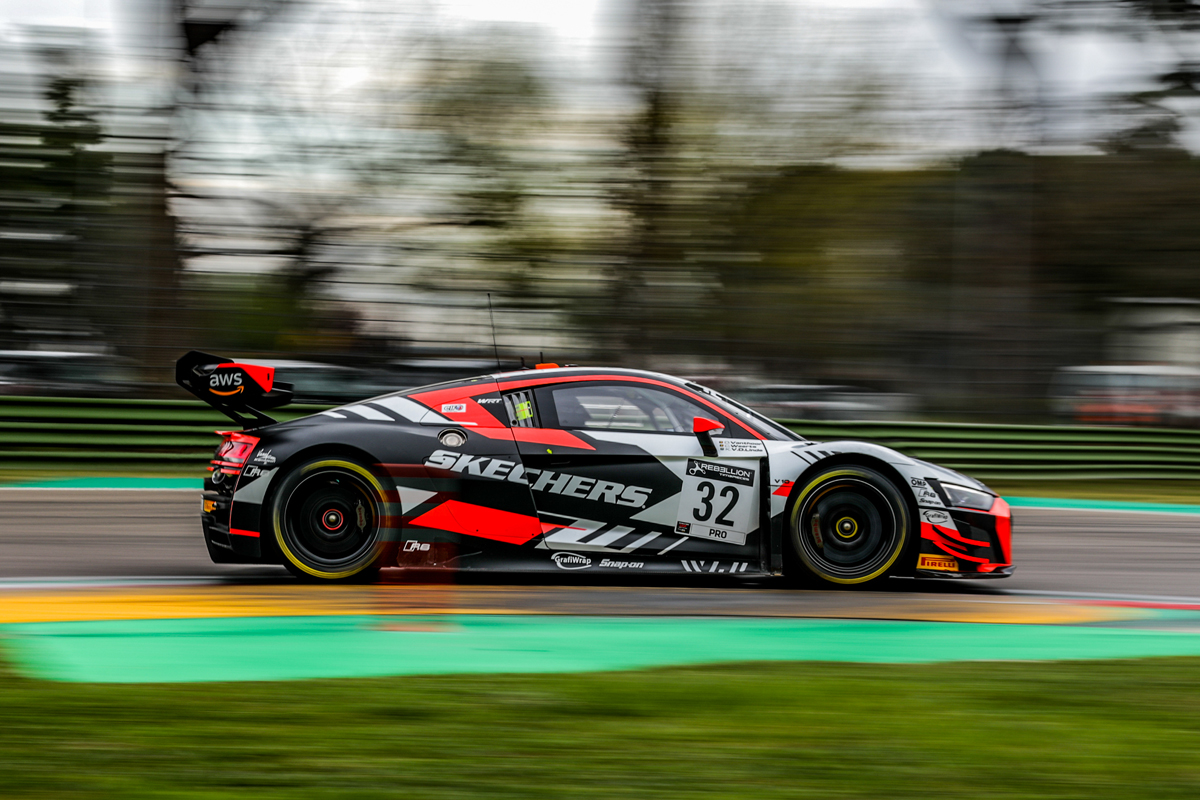 The Audi #32 is the ‘car of champions’. Dries Vanthoor and Charles Weerts, with the help of Kelvin Van der Linde, defend the title of the GT World Challenge Europe -also of the Sprint Cup-. And this defense of the title could not have started in a better way, since Vanthoor, Van der Linde and Weerts have achieved the pole of the 3 Hours of Imola. In a session of many contrasts, Dani Juncadella’s #88 Mercedes will start third. Pole in the Silver Cup for the #99 Attempto Racing Audi, seventh overall. In Valentino Rossi’s debut in the series, the Italian’s #46 Audi will start in 15th place.

The first qualifying session of the GTWC Europe in Imola ended with four Audi R8 LMS GT3 Evo II in the top five. Christopher Haase was in charge of taking the #12 Audi to first place with a time of 1:40.246. Behind the German, Frenchman Adam Eteki surprised with #10. Frédéric Vervisch placed the #46, in which Valentino Rossi competes, in fourth position after overtaking Dries Vanthoor, driver of the #32. Only Raffaele Marciello managed to break the dynamic by sneaking third with the #88 Mercedes. Miguel Molina, at the wheel of the #51 Ferrari, did not pass 21st place.

Despite the fact that Q2 was stopped by a red flag caused by the puncture of the Aston Martin #97 and the problems of the Lamborghini #77, the drawing did not vary too much. Patric Niederhauser placed the #25 Audi in the lead, followed by #66 by Markus Winkelhock. However, andl Audi #12 remained at the top of the combined time table ahead of #25 and #32. Dani Juncadella did not have the best classification for him and the Mercedes # 88 fell to tenth place, while the Ferrari # 51 followed the opposite path, since Nicklas Nielsen fixed Molina’s discreet role by finishing third in Q2.

Although the #38 McLaren finished in the lead in Q3with Marvin Kirchhöfer at his controls, and Charles Weerts was only eighth after finishing the session with a spin in ‘Tamburello’, the combined times played in favor of the Belgian and the #32 Audi took pole with a combined final time of 1:40.322born from the records of Dries Vanthoor, Kelvin Van Der Linde and Charles Weerts himself. The second position on the grid was in the hands of the Audi #25while Jules Guonon once again led the #88 Mercedes to the third position it occupied after Q1.

Read:  Sales of plug-in hybrid cars in Spain rise 67% in October 2021
Index hide
1 Mercedes is scary in Imola Pre-Qualifying, with the #88 in front
2 Results Classification 3 HOURS OF iMOLA AT GTWC EUrope 2022

Mercedes is scary in Imola Pre-Qualifying, with the #88 in front

The third Audi in the top four was the #12 Car Collection, fourth after Christopher Haase’s fastest time in Q1. For its part, fifth has finished the McLaren #111 of the JP Motorsport team thanks to the joint efforts of Christian Klien, Vincent Abril and Dennis Lind. In a Spanish key and beyond the third place of the #88 Mercedes of Dani Juncadella, Miguel Molina’s Ferrari #51 will start in sixth place, although more for the efforts of Nicklas Nielsen and James Calado than for the performance of the Catalan. For its part, Albert Costa’s #63 Lamborghini will start thirteenth.