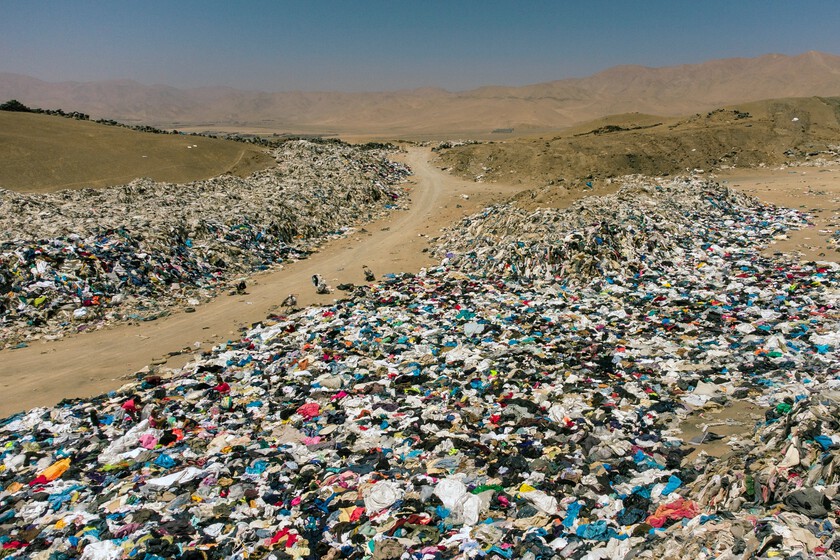 The fashion industry accounts for 8-10% of the world’s carbon emissions, according to the UN. In 2018, it was also found to consume more energy than the aviation and shipping industries combined and the equivalent of a garbage truck with clothing is estimated to be burned and sent to landfill around the world every second.

And the rate at which consumers buy clothes does not appear to have slowed in the 21st century. According to statistics from the Ellen McArthur Foundation, clothing production doubled during the 15 years from 2004 to 2019. McKinsey also estimates that the average consumer bought 60% more clothing now than 20 years ago. And fast fashion, while affordable, is extremely harmful to the environment.

Proof of this is the colossal mountain of discarded clothes – Christmas sweaters and ski boots included – that leave this strange landscape in the Atacama, the driest desert in the world, in Chile. The social effect of rampant consumerism in the garment industry, such as child labor in factories or ridiculous wages, is well known, but the disastrous effect on the environment receives less publicity. Here is a proof of it:

But the photographs that come to us from the Atacama desert are hard to miss so easily and show how the country suffers more and more from the pollution created by fast fashion. Chile has long been a hub for unused and unsold clothing, made in China or Bangladesh and passing through Europe, Asia or the United States before arriving here, where it is resold throughout Latin America.

Some 59,000 tons of clothing arrive each year at the port of Iquique in the Alto Hospicio free zone in the north of the country. Clothing merchants in the capital Santiago (1,800 km to the south) buy something, while much of it is smuggled to other Latin American countries. And at least 39,000 tons that cannot be sold end up in dumps in the desert like the one we see.

It turns out that in the Atacama desert there is a garment dump. Yes, a place where there are -at least- 100,000 tons of garments. Many have a tag and were never used. pic.twitter.com/hqUtmZER96

“These clothes come from all over the world,” explained Alex Carreño, a former employee of the port’s import zone in this article from the AFP agency. “What is not sold to Santiago or sent to other countries remains in the free zone since nobody pays the necessary fees to take it off. The problem is that the clothing is not biodegradable and contains chemical products, so it is not accepted in municipal sanitary warehouses ”, said Franklin Zepeda, founder of EcoFibra.

Clothing, whether synthetic or chemically treated, can take 200 years to biodegrade and is just as toxic as discarded tires or plastic materials. But of course, not everything is wasted: some of the people who live near the landfills go through the clothes to see what they can wear or sell. Although the rest simply stay there, growing more and more each year, thus forming the landscape of consumerism.

According to a 2019 UN report, global clothing production doubled between 2000 and 2014, and the industry is responsible for 20% of total water waste globally. To do a single pair of jeans at least 7,500 liters of water are needed.

The same report also explains that the manufacture of clothing and footwear contributes 8% of global greenhouse gases, and that every second, an amount of textiles equivalent to a garbage truck is buried or burned. And whether those gigantic mountains of clothing are left outdoors or buried underground, they pollute the environment and release pollutants into the air or underground waterways. You don’t have to be very smart to imagine what causes this crowding: loss of habitat, environmental and water pollution.