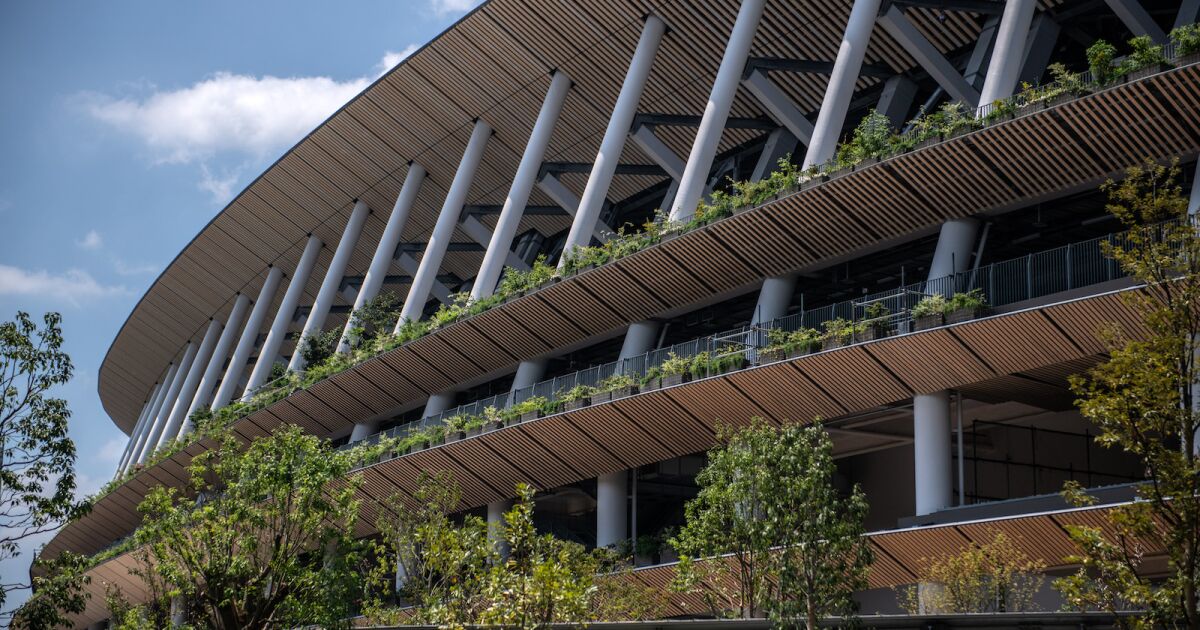 Although the English-Iraqi architect Zaha Hadid, was the winner of the international competition to design the main headquarters of Tokyo 2020, the new National Stadium of Japan is the work of Kengo Kuma, after the controversial decision to cancel Hadid’s project due to considerably exceeding the budget intended for the stadium. The building, built in a record time of 36 months, has a structure made of reinforced concrete and steel with a roof that combines steel and wooden trusses. Kuma’s design integrates vegetation on the façade and incorporates cedar-covered ailerons, which refer to traditional Japanese architecture, provide shade and allow natural ventilation. Sustainability is integrated through solar panels that cover the roof to generate electricity for the enclosure as well as a rainwater collection system linked to the irrigation system.

In 1987, when Kenzo Tange received the Pritzker Prize, the jury for the world’s most important architectural award described the Yoyogi National Gymnasium as one of the most beautiful buildings of the 20th century. More than three decades later, the jury’s observation does not seem to lose its validity. Tange’s design celebrated traditional Japanese architecture, generating a roof that abstractly refers to traditional pagodas, employing a structural and constructive solution that continues to excite despite the passage of time. Originally built as the 1964 Tokyo Aquatic Center, the Yoyogi National Gymnasium hosts handball, badminton and Paralympic rugby events for these games; reminding us that – sometimes – timelessness is not just an aspiration of architecture.

READ:  Route to try the best torreznos in the world

Fumihiko Maki, another Japanese architect who has won the Pritzker, was commissioned to design the venue for the World Wrestling Championships in 1954. His response was the Tokyo Metropolitan Gymnasium, a sports complex made up of three main volumes, with purposeful decks. occupying a public square. The three buildings: the main arena, the sub-arena and the indoor pool, formally contrast but dialogue with each other. The variety of languages ​​and geometries that are integrated into the complex is a good consideration for the human scale and the experience of the visitors, emphasized by the design of the exterior spaces that allow it to function as a public space. After hosting the gymnastics competitions in Tokyo 64, and a remodel in 1991 orchestrated by Fumihiko Maki himself, it is the venue for table tennis events during Tokyo 2020.