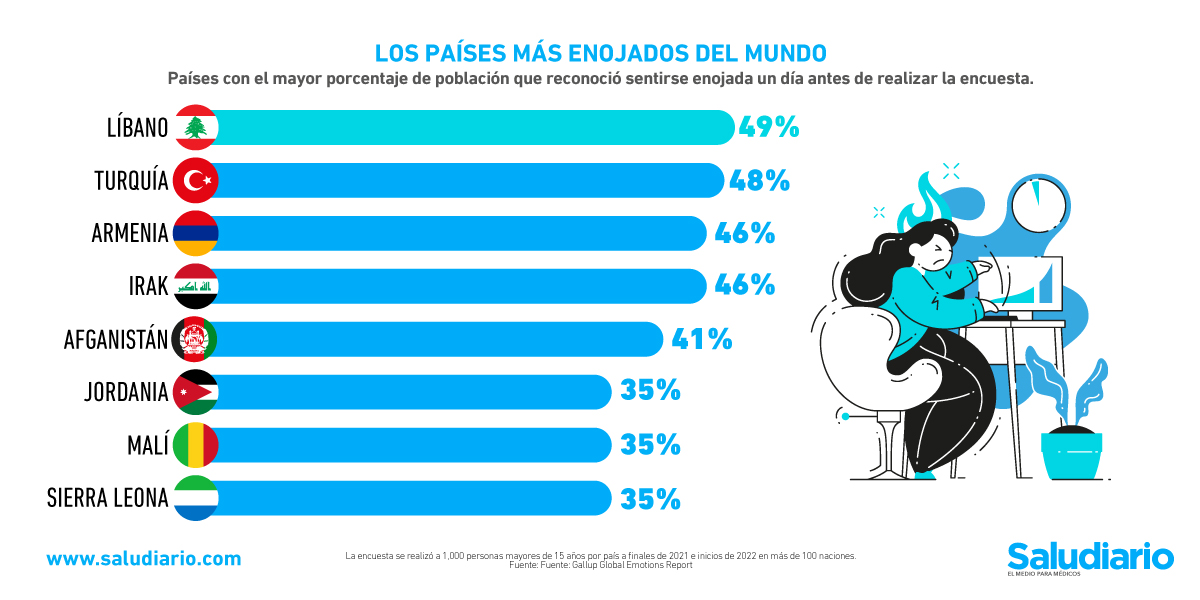 Feelings are natural in all living beings because they show the state of mind. While its variety is too wide and throughout life all are experienced. But although the main aspiration is always to count with joy, the reality is different because one must also go through the opposite extreme. Do you know which are the angriest countries in the world?

Relationship with the emotional part

Now, the first thing to describe is that a feeling is the result of emotions. It is a response that is mediated by neurotransmitters such as dopaminenorepinephrine, and serotonin.

A mistake that some make is to think that feelings are exclusive to humans. Through various studies it has been observed that animals also have this characteristic.

In this case, the feelings associated with moods they act as conditioning factors of some mental processes and, therefore, are factors that alter psychodynamics. It is a known fact that the intensity of memories can be strongly influenced by mood.

In this regard, many traumatic situations induce very specific moods that make the memories created under that mood especially intense and lasting.

It has also been detected that depressed people can have very adjusted perceptions of themselves and of reality. Whereas non-depressed people who have a positive mood often tend to be optimistic and minimize real difficulties.

Countries with the highest percentage of angry population

But although it is an individual characteristic, it can also be analyzed collectively. With this in mind, the consultant Gallup presented the results of his most recent Global Emotions Annual Report. It was applied in more than 100 nations and in the end it was obtained to the most angry countries in the world.

One of the first conclusions obtained is that the Middle and Near East is where there is a higher percentage of the population with feelings of anger.

The research identified that 49 percent of people living in Lebanon they had experienced anger the day before the survey. This is the highest rate recorded anywhere in the world.

Within the reasons it is indicated that there could be economic turmoil and high inflation. Also a massive explosion in the port of Beirut that destroyed much of the city in 2020. All of the above fueled anger against the country’s government for not enforcing security measures or not having the capacity to help the victims.

While second of the The angriest countries in the world is Turkey. In their case, 48 percent said they have feelings of anger and one of the reasons is the constant inflation they experience. The war in Ukraine has also had an influence due to its closeness and the turn towards authoritarianism that the Turkish government has manifested.

While Armenia is in third position with 46 percent. In this regard, the outbreak of war that occurred in 2020 with neighboring Azerbaijan was one of the aspects that raised the levels of anger in the population. After years of war, Iraqis and Afghans also have a long list of issues to be angry about, including the lack of basic public services in many parts of the country.

Finally, other of the nations that appeared within the The angriest countries in the world are Jordan, Mali and Sierra Leone.