The 67,663 air routes of the world, collected in an impressive map

By EzraSeptember 8, 2022No Comments4 Mins Read 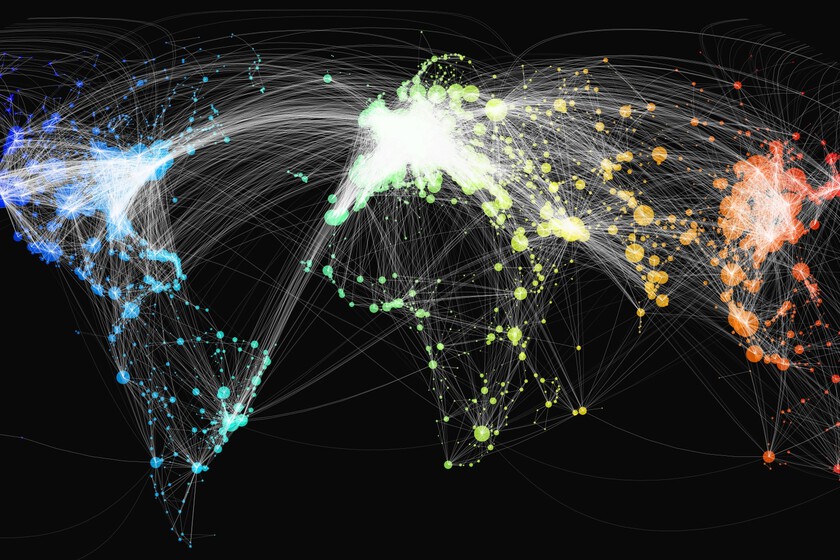 When Covid entered our lives, the aviation industry reached its lowest point: international travel was reduced by 98%. Now, little by little, the planes take off again. We have seen this summer a brutal rebound in passengers and right now there are about 8,755 commercial flights in the air going from one place to another. These move thousands of people and millions of euros in goods around the globe. The question now is: where are all those passengers and cargo going?

Data scientist Adam Symington set out to create a map using OpenFlights data to illustrate all the existing flight paths in the world. This is a laborious task, since in total there are 67,663 different air routes, which connect up to 10,000 different airports. There are several very interesting websites such as ArcGIS Pro where you can interactively view all these air routes and their detailed location.


You can see the map in its maximum resolution here.

One of the things that jumps out on the map in the first place is the number of air connections that exist around the big cities, especially in the eastern United States, East Asia, and especially in Europe. If we take into account the economic aspect and the population density, it makes a lot of sense. And although the US and China are the world’s biggest economic engines, you can clearly see on the map that Europe shines brighter than either.

This happens because the highest concentration of short flights takes place around Germany. Frankfurt International Airport is the busiest destination on the map, with 235 direct flights. On the other hand, almost all of the southern hemisphere is dark, except for a few bright spots in cities like Sao Paolo and Sydney.

It is also curious how vacation spots such as the Canary Islands have even more air traffic than some nearby African countries such as Morocco. There you can see the economic inequality perfectly: Africa is still far from the objectives of the airlines, unlike what happens with the most tourist destinations in southern Europe.

View of the air routes that meet in Germany.

One way to measure air traffic is to calculate the total number of passengers throughout a year. According to Airports Council International (ACI), eight of the 10 airports with the highest passenger traffic in 2021 were in the US. More popular that year was Hartsfield-Jackson Atlanta International Airport. Up to 75 million passengers embarked from there. One reason is its great location: it’s a two-hour flight from 80% of the US population.

Dallas/Forth Worth (DFW) ranked second with 62.5 million passengers. It is the headquarters of American Airlines, the world’s largest airline by fleet size.

While the US dominates the list when it comes to passengers, things change when looking at cargo volumes. In this category, Hong Kong ranks first as it processes more than 5.0 million metric tons of cargo and mail per year. Is about one of the busiest logistics centers thanks to its strategic location, its infrastructure and its customs, with favorable regulations for companies.

Finally, it is interesting to analyze which of these routes on the map are the busiest. According to the Simple Flying website,a short route from Jeju and Seoul (Gimpo) in South Korea It is number one in the world for flights, according to OAG data. This link of only 451 km has more than 120 daily departures. Jeju (the “Hawaii” of South Korea) is known for being an easy and cheap destination, as well as having some of the best scenery and beaches in the country, and there are few alternatives nearby.

But if we measure routes by kilometers travelled, the busiest connection would be JFK to London Heathrow. This has many daily departures (normally 18) and a reasonably long distance (5,554 km). The frequency and high demand offset the relatively low seats per flight (255) for a long-haul route.

In contrast is the second most popular route: Dubai-Heathrow. It has far fewer daily departures (eight) and is roughly the same distance (5,505 km). But it makes up for it with more seats per flight (469).