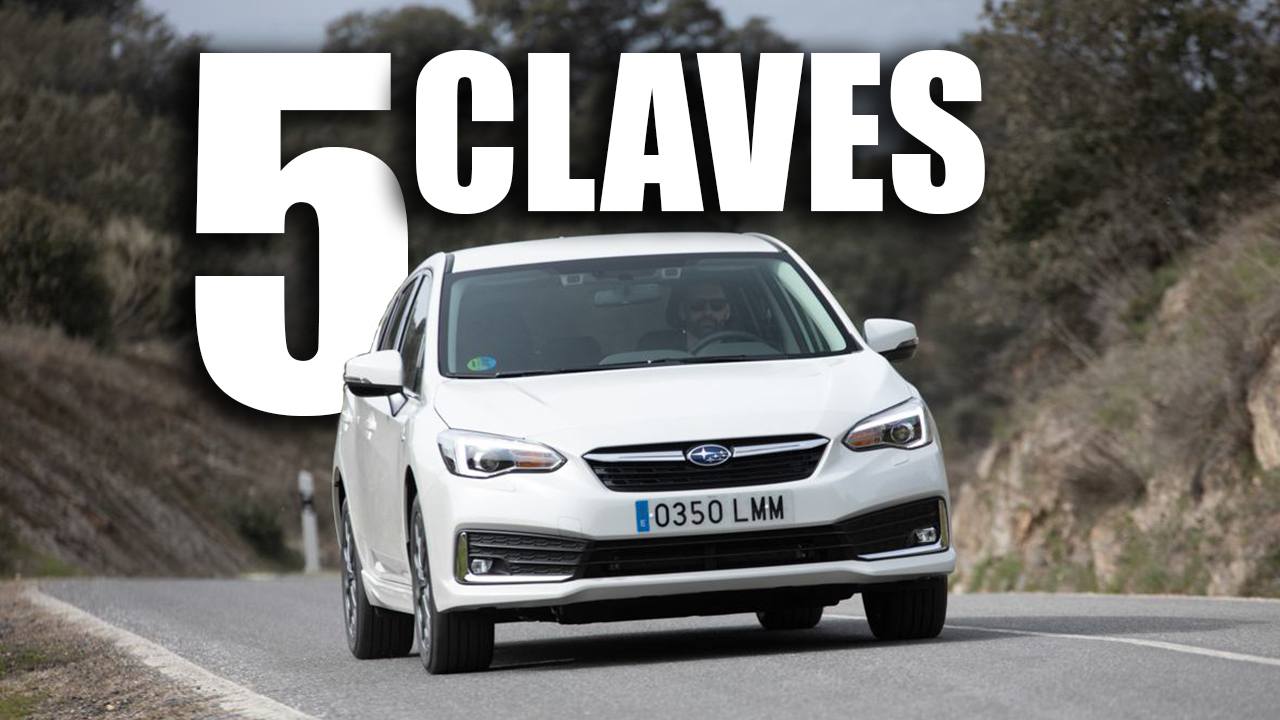 The new Subaru Impreza EcoHybrid is already on sale in Spain. The iconic Subaru model succumbs to the era of electrification and adds a hybrid version (HEV) to its mechanical offering. A model that sports the DGT’s ECO environmental badge and offers many advantages. We review the 5 most relevant keys of this Japanese hybrid car.

Subaru is working at full capacity in the electrification process of its European range. Some time ago, the Japanese manufacturer decided to venture into the electrified vehicle market by introducing its first hybrid cars to the Old Continent. Now, its hybrid technology has reached one of its most iconic models. The Subaru Impreza.

The Impreza has been the last member to join the Subaru Hybrid range. A family of hybrid vehicles that is made up of authentic references from the Japanese firm, the XV and the Forester.

It’s been just a few months since the new Subaru Impreza EcoHybrid It has started its assault on Spanish dealerships. An expected hybrid self-recharging variant (HEV) that stands out, among many other things, for wearing the ECO environmental badge of the DGT (General Directorate of Traffic) with all the advantages that this implies. The differences, or rather benefits, with respect to the model with a non-electrified engine are notorious. That is why we have carried out the selection of the 5 keys to the new Imrpeza EcoHybrid. Let’s go into detail and break down each one of them.

It is something that we have commented in the introduction of this compilation and the truth is that it is, without a doubt, one of the main keys of the new Impreza EcoHybrid. Currently, when buying a new car, one of the determining factors is being able to show off the DGT ECO label or, failing that, the distinctive 0 Emissions. Subaru’s new electrified vehicle, being classified as a hybrid car, carries the ECO label.

Wearing the indicated environmental badge on the windshield will allow us avoid traffic restrictions in episodes of high pollution and even other mobility advantages in large urban environments. The so-called low-emission zones are gaining presence at an accelerating rate.

2. The hybrid mechanics of the new Subaru Impreza EcoHybrid

Logically, and how could it be otherwise, another key to this model is its self-recharging hybrid propulsion system. The Subaru Hybrid Technology (HEV), which we could already find in other models such as the Subaru XV or the Subaru Forester, has finally landed in the Impreza range. The system combines an electric motor with two of the company’s main technologies.

Under the hood is a 2.0-liter four-cylinder Boxer engine that develops a power of 150 hp and 194 Nm of maximum torque. He is accompanied by a small 12.3 kW (16.7 hp) and 66 Nm electric motor of maximum torque built into the automatic transmission and powered by a 118V lithium ion battery. This mechanical set allows you to accelerate from 0 to 100 km / h in 10 seconds and reach a maximum speed of 192 km / h.

Read:  IndyCar - Álex Palou's champion triumph in Portland: from pole to come back from position 19

The electric motor that equips the Impreza EcoHybrid’s hybrid system has the ability to propel the vehicle on its own for a short distance. That is, it has a autonomy in 100% electric mode. This is also possible at the 0.57 kWh battery. A battery located at the rear of the vehicle and in which the energy necessary to power the electric motor is stored.

On the other hand, and no less important is efficiency. Declare a average fuel consumption of only 7.7 liters per 100 kilometers and CO2 emissions of 174 g / km according to the WLTP cycle. The 48-liter tank allows a total autonomy of approximately 600 kilometers. In addition, compared to the version with a 1.6 and 114 hp engine, the hybrid model increases the response of the vehicle by more than 30%.

The Impreza range
it is composed in Spain of a single level of finish. It’s about the Urban finish and, what may seem like a handicap, nothing could be further from the truth. The endowment is vast. Just take a look at the list of the featured standard equipment:

Despite its status as a hybrid vehicle, it still has a system of Four-wheel drive. Specifically, the new Impreza EcoHybrid equips a permanent and symmetrical four-wheel drive system. It is not a technology designed for off-road driving away from the asphalt. What’s more, Subaru focuses it directly on the field of safety and, more specifically, as an ally to avoid accidents.

Four wheel drive Symmetrical AWD remarkably improves grip in difficult situations. In a sporty driving, it will be noticed and, in the same way, it increases the braking efficiency.