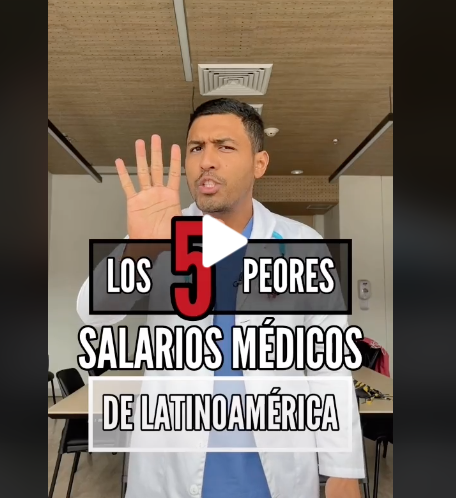 It is constantly mentioned that the field of health is essential for any nation. This is how it has always been and the current Covid-19 pandemic has confirmed it. But one of the drawbacks is that many times only patients are thought of and not those in charge of providing the service. All of this leads to a key question: Do you know which are the countries that offer the worst medical salaries in Latin America?

In that sense, the vocation of service is just one of the requirements that must be met to dedicate oneself to this profession. It is necessary to have a taste for helping others and personal relationships or otherwise the conference will not be able to be enjoyed.

All the adversities that must be faced

Similarly, it should be clear that it is a job that demands too much from the training stage. For the same reason, more years of study are needed because it not only covers the university part but also the rotation through hospitals and social service.

As a consequence of the above, the stress and anxiety levels are held at high levels by most doctors. Many develop both physical and emotional exhaustion and sometimes it is not a temporary situation but it lasts for months and may even never go away.

For all of the above, the minimum that is expected is to offer decent conditions for all health professionals. The satisfaction of helping patients is the same for everyone, but it is not the only thing to consider. In the end it is a job and deserves a fair and attractive pay.

Read:  What is aphasia? The illness for which Bruce Willis retires from acting

With this in mind, it is worth knowing the countries that offer the worst medical salaries in Latin America. If something characterizes this region of the planet, it is that health is not seen as a priority for the rulers.

From the above, the Dr Rawdy Royals, known as “The health influencer”, made a list about it. In his case, it is a Colombian internist who in recent years has gained notoriety through social networks.

In his case, he stands out because he constantly publishes educational and informative content. For the above, she has gained recognition and is already an internet celebrity. One of her most popular videos focuses on the countries that offer the worst medical salaries in Latin America. For the type of currency of each nation, he standardized everything in US dollars and the following were the results.

Worst Wages MEDICAL. (It is an average value of general practitioner)

As can be seen, Mexico is one of the nations that appear on this list. On several occasions it has been shown that health professionals face a serious scenario. Not only do they face marathon workdays, but they also receive minimal pay. In addition, the high levels of violence that prevail throughout the national territory, especially in rural regions, must also be considered.

Although within this region the most alarming case is that of Venezuela. During the last years it has faced economic crises that are getting bigger and bigger and seem to have no end. Its currency has devalued so much that today a professional doctor receives a monthly salary equivalent to 1.5 US dollars.

Lea Martinez is Raven from Teen Titans in excellent cosplay

Is Johnny Depp Returning as Jack Sparrow? Disney may offer the actor a $301 million contract to reprise his iconic role.