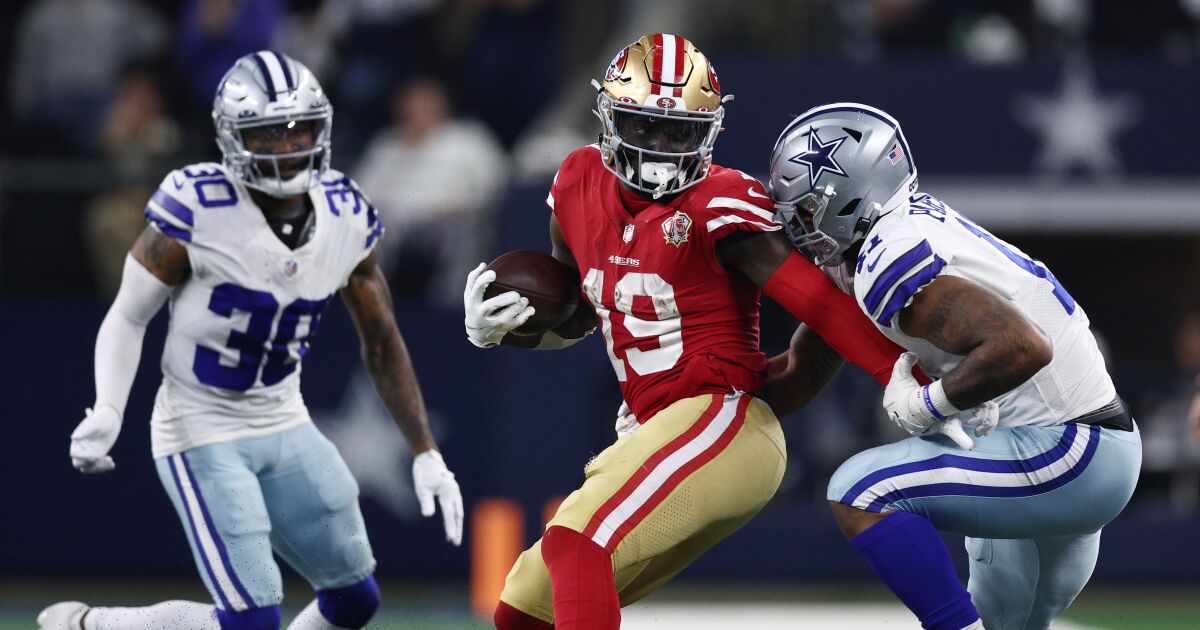 San Francisco quarterback Jimmy Garoppolo had a 172-yard game, one interception; his counterpart, Dak Prescott passed for 254 yards, had a touchdown pass and had an interception.

The 49ers established their running game, the fifth highest scoring in the league, since their first drive in which they rushed for 70 yards in 10 plays that culminated in a rush by 23-year-old rookie Elijah Mitchell, 963 yards on the year, to go up 7-0.

One drive later kicker Robbie Gould extended the lead to 10-0 with a 53-yard field goal and extended it, with another kick, to 13 unanswered early in the second quarter.

Dallas, the best offense in the league, responded with a 67-yard drive that ended with Prescott sending Amari Cooper into the end zone to shorten the distance 13-7.

Before the break, Gould kicked a 52-yard field goal, the second of more than 50 in the game, that led San Francisco 16-7.

The 49ers lost defensive end Nick Bosa for the second half, the team leader in sacks over the rival quarterback, he had 15.5 on the season. Bosa suffered a blow to the neck.

Early in the third quarter, the Lone Star team’s offense wasted a couple of drives due to three false starts. The Cowboys were the hardest-hit team in the league with 124 violations.

Midway through the third period Prescott scrambled for his receiver and was intercepted by K’Waun Williams.

The 49ers immediately converted the error into seven points on a trap play that receiver Deebo Samuel took to the end zone., on his first rushing TD of his postseason career, which extended the score 23-7.

In the fourth quarter, Dallas kicker Greg Zuerlein pulled his team within 23-10 with a 21-yard field goal.

Dallas seized the moment of the game with Anthony Brown’s interception, which gave Prescott a chance to return the field and score on the ground to pull within 23-17.

Problems came together for the 49ers when their defense, which had already lost Bosa, was forced out by linebacker Fred Warner with an ankle injury.

Despite injuries, San Francisco managed to retain the advantage to advance to the next round.