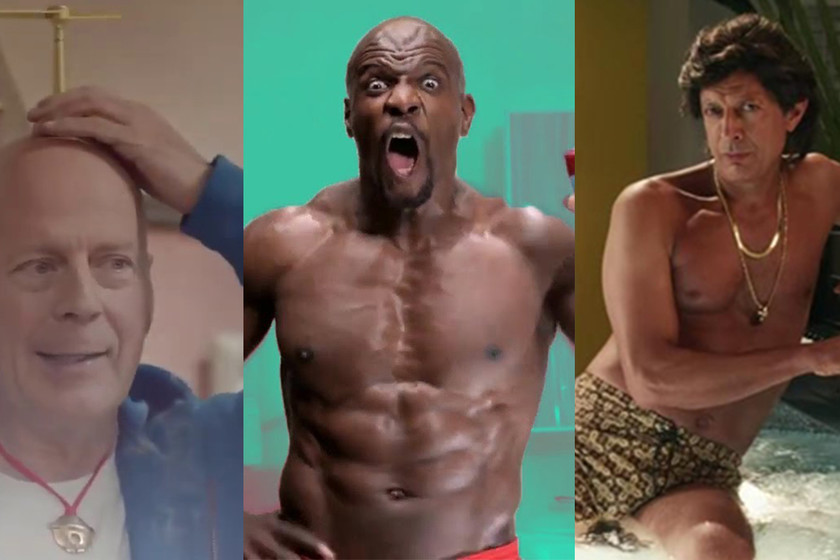 The Internet did its magic. Without eating or drinking it, the network of networks converted Bruce Willis in Trending Topic due to a delusional Japanese advertising campaign of the SoftBank Group company in which the actor has given life to an anthropomorphic version of Doraemon himself, the cosmic Cat.

But this of the Impossible promotional campaigns starring Hollywood stars It is not something new, and for example here I bring you this selection with 27 ads featuring celebrities from the big and small screens —Produced both inside and outside of Japan— that will make you wonder if what you have just seen is real or a product of your imagination.

We live in a wonderful world where Sylvester Stallone can advertise bread for a British company exploiting Rocky Balboa without his face drooping in shame.

The series of ads starring Terry Crews for the Old Spice brand may be some of the best celebrity publicity has ever seen. Visually they are the bomb, and their comic load is brutal. POOOWEEER!

Continuing with what we could qualify as the genre of “hunk guys hitting voices”, we have this camera campaign … hidden? in which John Cena intimidates some poor men into shaving in front of him.

If we talk about screaming menacingly, few are as expert in the matter as the mythical Mr. T. The actor from ‘Team A‘As soon as he orders you to treat your mother well, he scares you into eating a Snickers.

The creatives behind the Snickers campaigns are true geniuses. Only they would think of mixing ‘The Brady Tribe’ with Danny Trejo and landing the pirouette with a stellar appearance of Steve Buscemi. Sparkly.

To close the Snickers trilogy, here is the jewel in the crown. An authentic madness that works the miracle of combining Rowan Atkinson’s Mr. Bean with the genre Wuxia. Flying warriors and chocolates, how could they not have thought of that before?

This spot may be one of the most grotesque that we are going to see in this selection. CGI Bee The protagonist is an abomination worthy of the worst nightmare, but of course, everything improves when the deformed creature has the seductive voice of Antonio Banderas.

As a faithful devotee of the holy church of the BayhemI can’t help but fall at the feet of this Verizon campaign in which Michael Bay does what he does best: blow things up. And that includes a worker from the telecommunications company.

After so many years enjoying his mood, it has become clear that William Shatner is a person with a great sense of humor; And what better way to take advantage of this than to parody the fights from the original ‘Star Trek’. Tronchante.

When you are ever at a social event and you feel completely out of place and perhaps somewhat uncomfortable, think of Chevy Chase in this Cola Turka ad. That existential void in his gaze could not be described even by Lovecraft himself.

And from someone who does not know where the hell he is, we go to a genius unfolding like a fish in water in the advertisement of the kitchiest bulbs that we can put in our mouths. This General Electric spot is, directly, a artwork.

Two other greats of the comedic medium, such as Seth Rogen and Paul Rudd, are trying to find the perfect formula for the new Samsung campaign, and that includes somewhat compromised issues such as the possibility of having to wear diapers for the Korean brand.

Jerry Seinfeld wants his Acura, and he wants it now. And to achieve this, he is able to offer wonders such as a holographic dancing monkey or, even better, a bowl of soup cooked by the very … Soup Nazi!

Ryan Reynolds, in addition to being a really funny guy, looks great on camera, and this Hyundai ad exploited these two great qualities by setting itself in a city full of seductive clones of the Canadian actor.

If we put aside his impeccable career in film, Christopher Walken continues to be an interpretive marvel. As a sample, there is the brutal video clip of Weapon of Choice by Fatboy Slim and this Kia spot.

Take a good look at this Sky Fiber ad. Take a closer look at Al Pacino playing golf on top of a piano in an attire to the Hugh heffner. Now remember that Pacino won an Oscar for ‘Esencia de mujer’. Applying logic seems to be of no use in this case.

Yes, I am fully aware that this genius is not real and that it belongs to ‘Jack and his twin’, but to speak of Al Pacino and publicity have instantly brought me to this happy place.

We started the special section of delusional Japanese advertising with celebrities internationals from the hand of the one and only Nic Cage, who found here a golden opportunity to scream phrases and gesticulate at a level that he only equaled giving life to Castor Troy in ‘Face to face’.

True health is getting paid to advertise a vitamin complex laughing like a maniac. And if you don’t think this is true, your best bet is to ask Arnold Schwarzenegger.

Another Oscar winner of the stature of Tommy Lee Jones shows us from Japan How far can the energy levels of a good dose of Boss coffee go? This is how many of us feel in the morning after having the first cup of the day.

Harrison Ford can do anything. You can be the president of the united states, you can be a legendary archaeologist, and you can advertise a brand of beer mimicking in a sauna without showing the product until the end of the spot.

Hugh Jackman showed us at the 2009 Oscar Awards ceremony that he is a showman first class, and that dancing is not given to him at all. If he did it without any outside help, imagine what he can do after having a drink of Lipton Ice Tea.

I have seen this spot several times in a row and I have not come out of astonishment yet. A ballerina kettle walks over a container of noodles, closing the lid so that they cook properly. So far everything is correct – I suppose. What is less predictable is that the kettle will have Edward Furlong’s face on it.

One of the most viralized Japanese commercials with international celebrities was this one starring Jean Renó, in which the French actor, as Bruce Willis has done now, gave life to a humanoid version of Doraemon, the cosmic Cat.

Ben Stiller gives it his all and gestures in true ‘Zoolander’ style in this ad for Japanese soda. It does not reach the levels of the blue steel look, but it lacks little.

We conclude our selection with one of the most beloved foreign personalities in Japan. A Hulk Hogan who participated in this Hitachi campaign surrounded by clouds and smiling babies. Grotesque it is little.

Dragon Quest: The Adventure of Dai