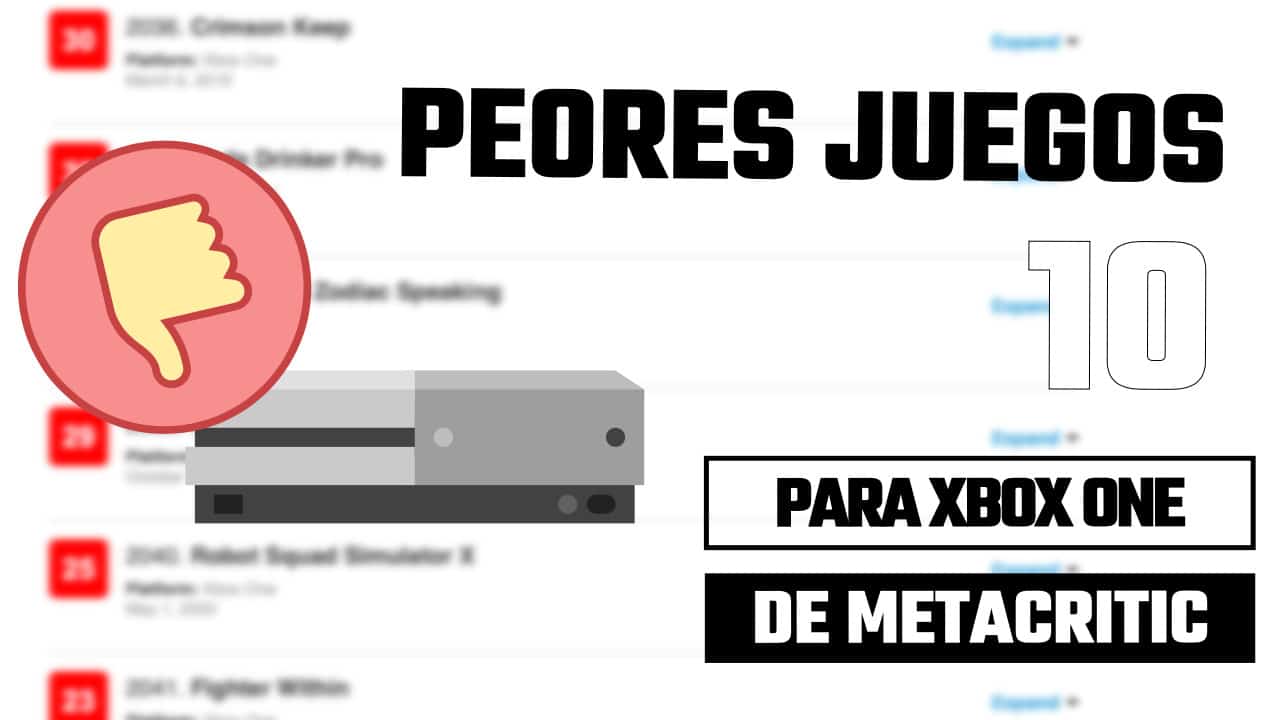 Just as there are games that are true masterpieces in the video game industry, there are also some video games that users consider true aberrations and, in some cases, part of the gaming community believes that they even lose the right to be called video games.
Video games, like any art, are an inexhaustible source of disputes about which game is better and usually have a really subjective component when evaluating a game, since not everyone likes the same things and not everyone looks for the same as a video game. That’s why we have some websites like metacritic, where we can find the notes of the specialized media and the user base. Another debate would be the objectivity of the analysis of both parties, since it is not the first time that a game suffers ‘Review bombing’ by users in a boycott exercise, as is the recent case of Digimon Survive, which users bombarded for not being an RPG.

And that is what we are here to talk about in this report, 10 of the worst games Xbox consoles have ever had based on their Metacritic ratings the best Xbox games based on Metacritic, because there is always a tendency to talk about but never about the games that close the lists, so we want to know your opinion on this topic.

If this report is interesting for you, it is likely that we will also bring you a second report with ten of the best games in the catalog now, of all the consoles in the Xbox ecosystem, since only in the first Xbox console are there more gems can not. But for now, let’s start with this first report of The 10 worst Xbox One games according to Metacritic.

The 10 worst Xbox One games according to Metacritic

Bounty Battle was sort of Super Smash Bros., but we all know what usually happens when someone tries to copy that formula. That is, sometimes it doesn’t turn out as well as expected. In this game, casts of indie titles such as Darkest Dungeon, Dead Cells or Guacamelee! were collected, to give a few examples. The visual section could not be criticized, since it was very well done, but unfortunately that was the only good thing about the title, since Metacritic places a lot of emphasis on the fact that the characters are not completely polished, since some are more than others. Between this and the fact that the game had constant bugs and errors that caused the game to crash and, in general terms, this optimization and lack of polish was what made the game not exceed the score of 32 out of 100 in its Xbox version. One.

Doug Hates His Job was a game that presented us with a premise that seemed very innovative on the table, such as having up to eight different game modes, which sounds pretty good, but the truth is that nothing could be further from the truth. In this game, we will simply be Doug, a man who hates his monotonous and boring work. This game mixes different elements of the games of the genre such as platforming, shooter shots, hack and slash, being part visual novel, among many other genres that are mixed in a blender. And despite the fact that all this seems very nice at first glance, the sad reality is that the press at Metacritic booed him strongly for mixing so many different mechanics, that in the end it ended up looking more like a weird concoction than a video game.

Ghostbusters: The Videogame Remastered was given away on the Epic Games platform, but in said remastering, although it is true that it was not badly received, there was a point with which the players and the press agreed in terms of criticism Negative refers: Lack of your cooperative mode. This lack of a cooperative mode that was present in the original title, not only makes it below it (despite the questionable quality of the original), but it does not encourage too much to play something that you had already played for the fact of being “prettier”. For this reason it was that the remastering was so criticized and, in fact, you just have to look at the Metacritic files to realize it.

Listed on Metacritic as a game that everyone who played it wishes they hadn’t played. While it is true that all the enemies in the game were quite entertaining, again everything nice ends there, since Crimson Keep is presented with its 30 out of 100 as one of the worst games on Xbox One. This is because the game had a combat that wanted a lot to be desired by anyone who has ever tried it, with rewards that normally will not be useful to us and a level design according to critics, quite decadent. Between the poor rewards system, questionable level design, and awkward combat, Crimson Keep was just a well-intentioned attempt, but one that passed unnoticed by the Metacritic page.

Read:  Make room on the shelf for Deep Pink, Microsoft's new pink controller for Xbox One and Xbox Series X/S

According to its description, this game was a precision mix of Microsoft Flight Simulator that leaves the player thirsty and trapped in a beautiful world where he will experience all aspects of soda. This is how Soda Drinker Pro is presented, with that and with eight negative reviews and one mixed that give it an average of 30 out of 100. I guess it was expected from how it was seen in the trailer, but this is literally a simulator of drink probe for xbox one, with no goal beyond. Various media outlets have mainly complained not only that it seems like a bad joke, but that they find it quite difficult to call this game a “something” experience. In addition to asking the question of why or how the game has come to the Xbox store.

This is the Zodiac Speaking

With only four negative reviews and a mixed review, this game was suspended by critics on Metacritic with a 30 out of 100. The reason for this suspension? Well, according to critics, despite the fact that the game fulfills its pluses and minuses, the function of making you tense in some situations and providing good details thanks to the research carried out by the developers, it has quite a few cons, such as the fact that the game itself is low quality in the technical section, especially in the graphic, since it has some problems that appear frequently. The problem that the game has when it comes to solving crimes is also discussed, since what we will have will be pure interactions. Perhaps the game would have been much better if it didn’t have these problems. Although I suppose that developing a game is already difficult in itself.

At SomosXbox we love car games, and without generalizing, I personally like the style of Rock ‘N Racing Off Road DX a lot too. However, in Metacritic they do not think the same, and the critics have hit him everywhere. According to Metacritic reviews, the content of the game is scarce, having only five championships where it will not take us more than an hour or an hour and a half to finish the game. According to Metacritic, the game is entertaining, but the artificial intelligence leaves a lot to be desired, in addition to some strange physics, leaving the player with a somewhat dubious experience that will make him wonder if he should look for another arcade driving game. have some more fun.

As its file indicates, this game has several story missions that take place around the world, and with this we will have at our disposal four different robots, two land, aerial and underwater. In addition to six training missions so we can practice. The premise sounds good at first glance, but in reality, Metacritic has crushed the game with a 25 out of 100. The only good part of the game is its missions, which have a great variety and do not feel monotonous, but as far as As for the other sections, according to the critics, the graphic graphics seem to be taken from the Xbox 360 era, the game’s mechanics are not very easy to assimilate, and their ideas to become a great game failed. What could have been a good title without becoming great, unfortunately did not have the luck of many others and has ended up becoming one of the worst Xbox One titles.

We are not going to lie to you, seeing this trailer gives anyone the creeps and we would all like to experience the Fighter Within experience, one of the titles that came out as an Xbox One exclusive, but the truth is that both users and the press have not liked it at all. Why? Well, because this game doesn’t have very good characters and they don’t finish being characterized. In addition, the game gets boring as soon as you play for a while and although it is true that the story is not the main thing in this type of game, it is true that the plot is not deep at all and its playable mechanics do not help either because they are quite scarce. All this is what they give us from the Metacritic reviews and tells us why it is one of the worst Xbox One games.

How far was that 2015, when we received one of the best games in history: The Witcher III. However, just as that year gave us great titles, there were also other cases such as Rugby 15, which according to all the reviews published on its Metacritic file, is a game that wastes opportunities to be a good game and ended up being a disaster total. According to reviews from Metacritic, the reason for this is none other than as soon as we put ourselves at the controls for half an hour, one realizes the bad experience that this game gives us with all its bugs, coming to be little or nothing polished, at point that they recommend that if you are a fan of rugby, go looking for gold elsewhere, because with Rugby 15 you will only find copper.