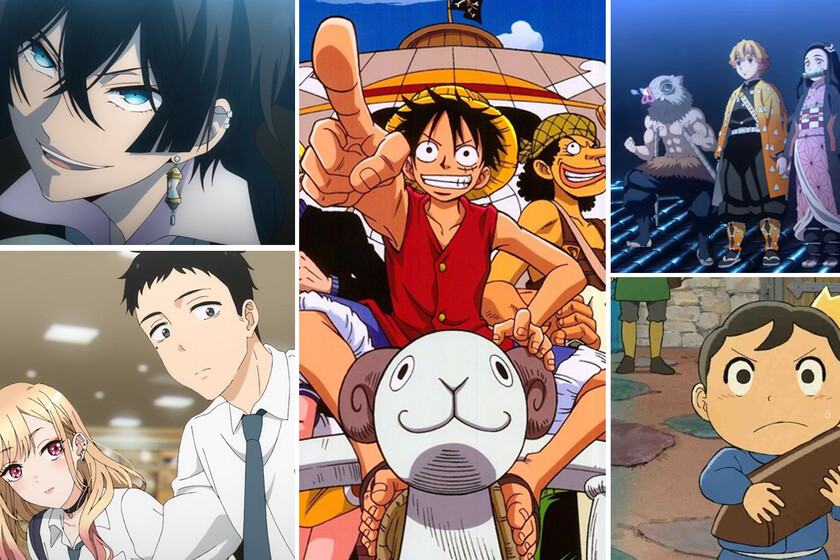 This last winter season It has left us several surprising premieres that have managed to carve out a niche among the giants of anime. Like every year, there has been a good string of new series, but there are ten in particular that have pulverized searches in Japan and globally and have positioned themselves as the most popular anime of the season.

The vast majority of them have been streamed through licenses and simulcast, so here is a list of how to catch up if you still need one last push with these series.

‘The Case Study of Vanitas’

East steampunk fantasy anime adapts Jun Mochizuki’s manga with a 24-episode season. The story centers on a young man named Vanitas, who has in possession of a book called “The Book of Vanitas” with which he can cure vampires of a strange disease that turns them wild against their will. In his mission he is joined by the vampire Noah Archivistwho can read people’s memories after drinking their blood.

Available within the Crunchyroll catalog.

‘Arifureta: From Commonplace to World’s Strongest’

We continue with another fantasy anime in the ranking, this time with an adaptation of Ryo Sirakome’s light novels illustrated by Takayaki. the plot of ‘Arifureta’ follow Hajime Nagumowho has a relationship with the popular Kaori and is tormented by his classmates for it.

The entire class is transported to a fantasy world in the purest isekai style and unlike his companions, he only receives one power of the most common: transmute materials. In order to survive after the betrayals of his companions and continue his adventure through this strange world, Hajime begins to create weapons with his new ability and become stronger.

For now the anime has two seasons with a total of 25 episodes and is not available within Crunchyroll Spainbut as more series and licenses have been arriving, it is possible that we will soon be able to see it from our country thanks to the merger with Funimation.

Another “harem anime” has crept onto the list, though ‘World’s End Harem’ it has a slightly different tone pulling more towards the thriller in a science fiction setting. This LINK and Kotaro Shōno series stars Reito Mizuharaa young man who had been put into cryogenic freezing while a cure for his illness is found.

However while he slept, a deadly virus has almost completely wiped out the planet’s male population, making men a precious resource. In the midst of an avalanche of women harassing him, Reito is only interested in finding his childhood sweetheart.

‘Ranking of Kings’ has been one of the great surprises of the season with its 23 episodes and has crept into the ranking along with much older series. The story of Sōsuke Tōka follows Boji, the prince of the Kingdom of Bosse. Bojji is deaf and dumb and openly despised by his people and his caretakers, but he dreams of becoming the best of kings.

Things start to change when he meets kagethe last survivor of a clan of assassins and one of the few who can understand Bojji.

‘My Dress-Up Darling’ is the other big winner of the season and continues to sweep sales in Japan with its mix of slice of life and romantic comedy. The anime adapts Shin’ichi Fukuda’s manga, where we are shown that Wakana Gojō He is a very introverted boy who aspires to become a master doll craftsman for Hinamatsuri.

Read:  Star Wars: The Most Macabre Theory About R2-D2

Gojo has no friends or hobbies, but when his partner Marin Katanawa discovers that she knows how to sew, she manages to convince him to help her cosplay her favorite series.

We entered fully into the field of the great series of the moment, and how could it be otherwise ‘Boruto: Naruto Next Generations’ is also very present in the list. The sequel to ‘Naruto’ has already more than 240 episodes aired and the anime continues to grow each week, so don’t be surprised if it also becomes one of the stars of this spring season.

‘Boruto’ focuses on a new generation of ninjas from the Leaf Village, focusing especially on Boruto Uzumaki, Sarada Uchiha and Mitsuki.

The second part of the final season of ‘Shingeki no Kyojin’ has also swept its premiere during the winter season. the sleeve of Hajime Isayama it already ended last year and the anime is getting closer and closer to its final conclusion, although we will still have to wait for 2023 for the closure of the series.

‘Shingeki no Kyojin’ follow Eren Jaeger, Mikasa Ackerman and Armin Arlet, who have always lived inside the walls. Beyond, there are only monstrous creatures known as Titans, and when they invade the city where they live, the lives of the three young people change forever and they decide to join the Exploration Corps to fight these beings.

The 12 new episodes have been seen on Crunchyroll, although you have to do some juggling between platforms to be able to watch this series in streaming and here we leave you a complete guide.

‘Kimetsu no Yaiba’ It has been the real bombshell in recent years, with the anime series breaking records everywhere and ‘Kimetsu no Yaiba: Infinite Train’ being crowned the highest grossing anime film in history. The second season of the anime has kept its fans in suspense through the two new arcs that could be seen in winter, and although there is still no release date, we already know that there will be a third season for the series.

The series adapts Koyoharu Gotōge’s manga and is set in the Taisho era. The plot follows Tanjirou Kamadoa young man who witnesses how his entire family is killed and his little sister nezuko has been turned into a demon. In an attempt to turn her back into a human and avenge her family, Tanjiro begins training to become a demon hunter.

The second season of ‘Kimetsu no Yaiba’ has been divided into the Infinity Train Arcwhich adapts the film in 7 episodes, and the Pleasure Quarter Arch with 11 chapters, with everything available within Crunchyroll.

And we come to the end of the list with ‘One Piece’ as the undisputed queen of seasonal series… something that is also very likely to be repeated in the spring thanks to the fact that the anime continues to air with a new chapter every week.

With more than 1000 episodes behind him, Eichiro Oda’s ‘One Piece’ follow the adventures of Monkey D Luffya young man who can stretch his body like rubber and aspires to become the Pirate King.

The series can be seen in its entirety on Crunchyroll in Japanese subtitles and with the original dubbing in Spanish in the first plot arcs.

Protocol Labs, Chainalysis and Bittrex join the layoff season in the cryptocurrency industry