That chaos in which British politics has become can still get worse: Boris Johnson sounds 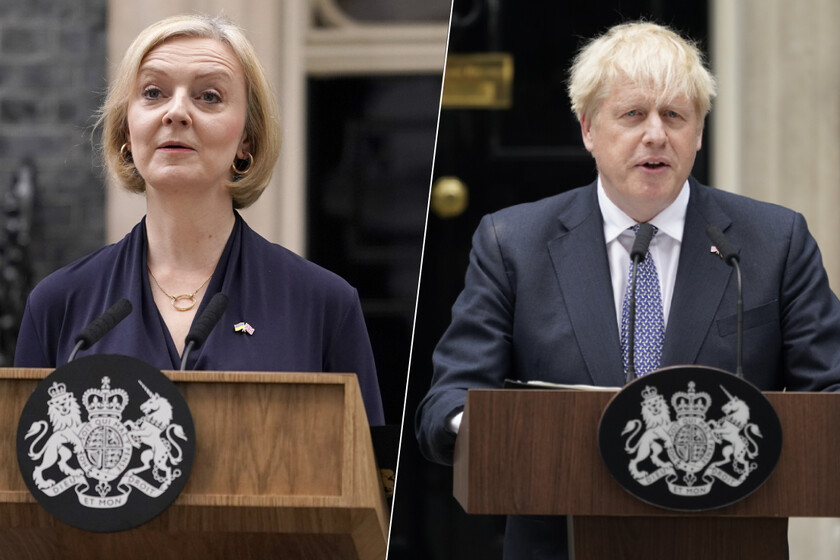 The United Kingdom is experiencing difficult times these days. The country was first rocked by the death of Queen Elizabeth II and is now headed for a third change of prime minister in eight weeks. After just 45 days in office, Liz Truss has stepped down from the post, ending the chaos they created with new tax cuts, the economic downturn and weeks of political infighting resulting in dismissals and resignations. It is not clear if the one who will replace Truss will be someone from the party or we will see elections.

But that Boris Johnson is considered as a possible replacement already shows the problems that the British political sector is experiencing right now.

resignation. “Given the situation, I cannot fulfill the mandate in which I was elected by the Conservative Party,” Liz Truss said at the gates of Downing Street and after handing in her resignation to King Charles III. In fact, a growing number of Conservative members of parliament had been publicly calling for her resignation for days. Although she will remain in her role on an interim basis until a successor is named, a leadership competition is expected to take place over the next week and many household names sound like possible replacements.

But before we get into it, we need to understand what happened, where all the fuss is coming from and why the Conservative Party is in decline.

Why? Truss came to power thanks to a political campaign of low taxes and promises of growth. What he didn’t expect is that a couple of days later the Queen was going to die and politics was going to be frozen for weeks of official mourning. When life returned to normal, Truss’s then chancellor, Kwasi Kwarteng, announced a package of fiscal measures, including the abolition of the highest rate of income tax for the wealthy. That, along with cuts due to a huge increase in borrowing, spooked markets.

As we told Magnet at the time, the pound tanked, UK borrowing costs rose and mortgage interest rates surged amid runaway inflation. Even the Bank of England had to somehow rescue the pension market. And that the country was not plunged into absolute chaos.

Is Boris Johnson what people want? It is curious that despite his removal from office just three months ago, some Conservatives have suggested his return to power. Former Culture Secretary Nadine Dorries tweeted that he was the only MP with “a mandate from party members and the British public” after winning the 2019 election. Although Johnson enjoyed considerable popularity, he lost all credibility in his last months due to a political scandal over not abiding by Covid rules and his links with the parliamentarian accused of harassment sexual Chris Pincher.

Read:  Meryl Streep improvised up to 25 phone calls in 'Don't Look Up'

Will there be general elections? The Conservative Party wants to avoid this possibility at all costs. Mainly because the latest polls suggest that Tories They would suffer a crushing defeat. His numbers are so bad that the Conservatives know that if there were to be an election now, they would face a landslide defeat. However, if Conservative MPs are unable to reach a consensus vote on a future leader, it is possible that he will go to the polls.

This process takes weeks, but the party is trying to get it done in a few days. Those who will present themselves to be leaders must obtain the support of at least 100 deputies, that is, there can be three candidates at most. Once it’s down to two, party members will vote and elect a new leader by October 28.

🇬🇧 The Truss government is the most unpopular since @YouGov collect the data.

77% of Britons disapprove of his management.

At this point it is not a question of whether or not he will leave, but when. pic.twitter.com/Uxll69Y0K1

The decline of the Conservative Party. Keep in mind that the party is coming off a series of poorly managed crises: from a hard Brexit to the Boris Johnson scandals and later the currency and cost of living crisis. And it seems that the time has come when voters are ready to kick out the Conservative Party once and for all. In a few weeks, the country has achieved high mortgages and a very weak currency. And what is worse: now he is hostage to 350 Conservative MPs who have seen four prime ministers in seven years.

Recent YouGov polls already put Labor at the head of the next government: 47% of Britons believe a Labor government is the most likely outcome of the next general election, due to be held in January 2025 if nothing happens. unexpected. Another 26% believe there will be another Conservative government, while 28% are not sure. According to another Opinium poll, if a general election were called now, Labor would win 411 seats to the Conservatives’ 137, a brutal defeat not seen since 1997.