Bullfrag
Home Recipes Thanksgiving; the American tradition that is worth importing, its recipes, the... 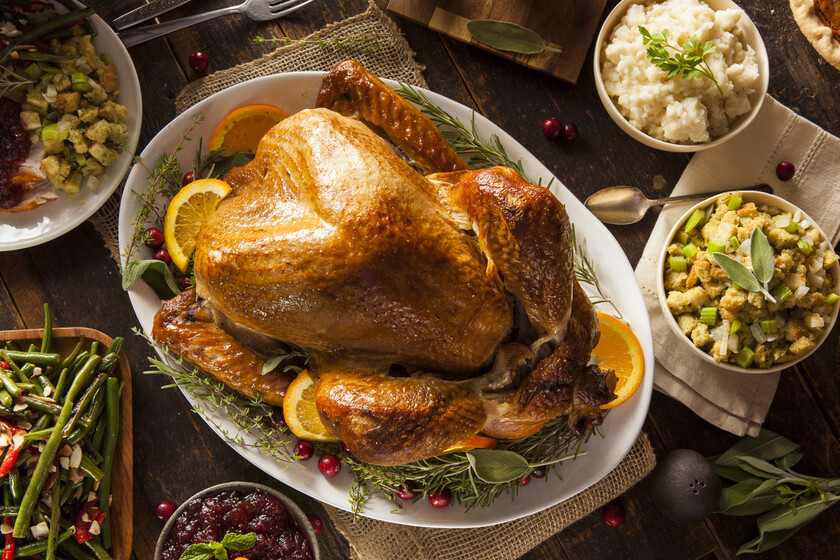 The fourth Thursday in November is marked in red on the American calendar. Thanksgiving is coming -or Thanksgiving-, Christmas prelude where Americans thank each other for the year while gorging themselves on roast turkey, gravy and all kinds of purees.

Maybe TV has done a lot of damage and let’s see the scene as something grotesque, with the whole family gathered around the table and naming the good deeds of the year holding hands. Although it is suitable for a monologue, the reality is that as a party it does not seem crazy to me.

We have imported Halloween, which consists of dressing up as a fool and asking for candy, ¿why not adopt a custom where you eat turkey -much healthier than chocolate-, thank you and on top of that you don’t have to be dressed as Jack Skellington?

The reality is that beyond my wishes, Spain is beginning to have a certain desire for Thanksgiving – surely also with a commercial vocation – which is quite far from the pretended origins of community that this moment advocates.

What is certain is that there are many restaurants, most with American touches, that are committed to celebrating this party and that you can now enjoy in some of our cities. By the way, maybe you didn’t know it but there are sources that suggest that the first ‘Thanksgiving’ was celebrated by Spanish settlers.

Index hide
1 A slice of history
2 The recipe: no turkey there is no paradise
2.1 Why the turkey?
3 Why is it worth it
4 Restaurants to celebrate and eat Thanksgiving

A slice of history

With America just recently discovered, there were many settlers who tried their fortune crossing the ‘puddle’. Most of them British, many of them persecuted for religious reasons. Reason why in the collective ideology is the famous Mayflower ship, loaded with pilgrims.

The reality is that it is part of the story that has ended up penetrating, but Thanksgiving gestures are relatively frequent in the French and Anglo-Saxon cultures of the New World, which used to coincide with harvest festivals. In fact, there are also Thanksgiving offerings related to Spanish settlers in Florida during the 16th century. However, that moment of union between pilgrims and natives has transcended, around the 1620s. 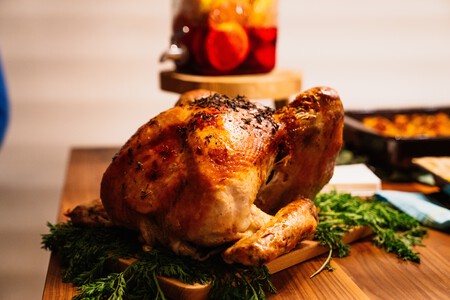 The place, Plymouth, on the Massachusetts coast; dinner, what was there. So much so that that small colony of barely a hundred people I did not have enough supplies for the celebration. This is why the native Wampanoag shared some of their food with them.

Now you will think that There is little point in celebrating a successful harvest in November and less on the East Coast of the United States, and you are right. In fact, in Canada thanksgiving is celebrated in the second week of October and the reason for the celebration of November has to do more with political events than natural ones.

Abraham Lincoln that set the date in 1863 on the last Thursday of November, coinciding the end of the month with the anniversary of Evacuation Day (when the British left the United States after the War of Independence), although it was already celebrated in most states around those days.

As early as the 20th century, more for a commercial reason, Franklin D. Roosevelt moved the date to the fourth Thursday of November, which on some occasions will mean the last of the month and on other occasions it will mean the penultimate.

The recipe: no turkey there is no paradise 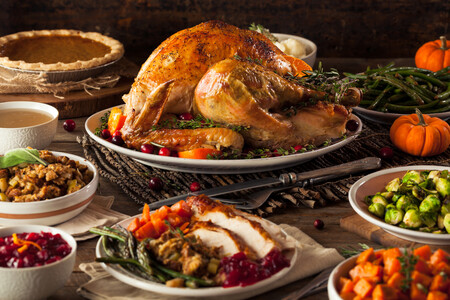 The Thanksgiving ‘pavicide’ has numbers. It is estimated that about 46 million turkeys are consumed Thanksgiving, which is not a negligible figure. Even more so if we put it in the context that we are talking about so much turkey for 330 million Americans. The amount, translated into total spending, is about $ 1 billion to buy turkey.

Roast, stuffed (vegetables, onions, bread, raisins, bacon and sausages, fruits …) and large format, the weight of the turkey can be around two or three kilos -for a small house- to specimens of more than five and six kilos when it comes to feeding a large family, as if we were talking about The Brady Tribe.

By the turkey side, a recital of side dishes. Mashed potatoes (mashed potatoes), creamed corn (a cream of corn), peas, and various sauces, generally of two types: gravy (a reduction of meat broth with a very concentrated flavor) and a lighter, sweet and slightly tart like that of lingonberries. 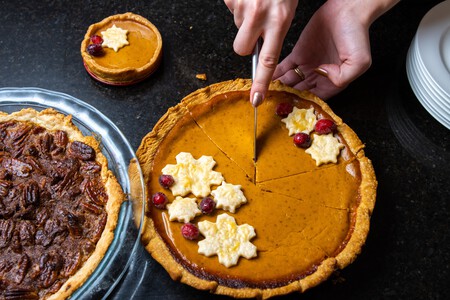 As dessert, the ‘feet’ are not usually missing.

To all this is added a compendium of vegetables, roasted or cooked, which include carrots, leeks, parsnips, asparagus, Brussels sprouts, cauliflowers, celeriac … Come on, most of the winter products that we can see in our markets.

To top it off, the deployment of feet and cakes that characterize the American pastry. Usually pumpkin pie, but also other products such as apple, pecan, cherry or rhubarb.

Surely it makes us strange to see the turkey as the protagonist of this celebration because we are not used to eating it, but in America it is common. In fact, in the American continent there are several wild species of turkey, which could have been part of the first Thanksgiving menus.

Read:  Memory Cards on Xbox: how they work, similarities and alternatives 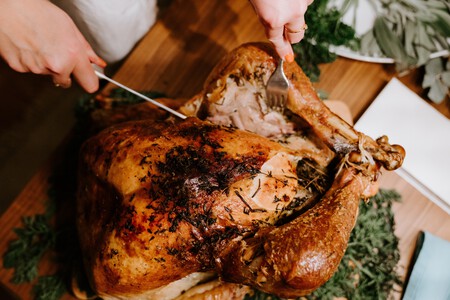 The reality is that their advantages over other birds, Apart from its availability, it is the size, but still this is not a coincidence. Especially in the 20th century, when different ‘species’ of commercial turkey became popular as the Beltsville Small White, now in disuse to the detriment of the ‘king’ of Thanksgiving turkeys.

Broad Breasted White is the name of this breed of turkey that today is present in the immense totality of the houses. Large size, easy to feed and with a lot of breast, this type of animal has managed to conquer the hearts and stomachs of Americans.

Why is it worth it 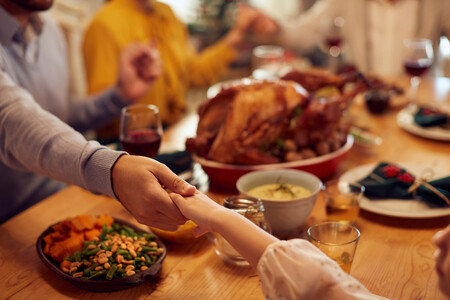 Gather around a table, give thanks and eat well … Do you really need reasons to want to celebrate Thanksgiving? Maybe not with the turkey, sure, but why not. For a little belligerent and little carnival tradition that we can import from the United States, let’s do it.

And if we want the complete pack, there will be nothing wrong either. Turkey, purees, sauces and desserts … The plan is told on its own, although perhaps that recital of ‘I give thanks for …’ seems forced to us, which does not seem unreasonable to me because being well born is being grateful.

The only downside is that overlaps slightly with Christmas parties, which is why more than one is already bitter about the meeting, but Thanksgiving in pétit committee I think it is a party that cannot be blamed.

Restaurants to celebrate and eat Thanksgiving

There are purist options, on-the-go options, and more budget-friendly options. Without a doubt, the best thing about Thanksgiving is giving yourself the kitchen tute when in Spain we talk about a working day. In the United States it is a holiday, so logically they have time for the whole deployment.

All the more reason for us to bet on restoration on this so ‘designated’ day. The ‘full equipe’ is offered by restaurants such as the Madrid Desencaja (Paseo de la Habana, 84) where Iván Sáez serves a special menu for that day with stuffed turkey, mashed potatoes, cumberland sauce, gravy, and other garnishes like mushrooms, green beans, and cabbage. 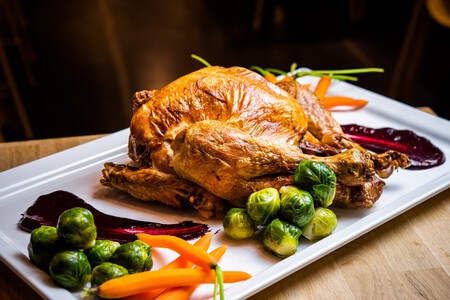 Desencaja turkey, both to eat there and to take away.

In addition, they offer the take away alternative (a whole turkey, about five kilos, for 70 euros and with prior reservation) or the option of consuming it at La Tajada (Calle Ramón de Santillán, 15), his other restaurant, just 40 meters from Desencaja.

In the capital you can also enjoy it at the Puerto Lagasca restaurant (Calle de Lagasca, 81), which extend the menu until Sunday, since on Thursday 25 it is completely full. In this case, again the purist option of stuffed turkey, cranberry sauce, green beans and roasted sweet potato.

Turkey also reigns supreme in the Hotel Urso proposal (Calle de Mejía Lequerica, 8), which raises the Thanksgiving category from its five-star status, with a paired menu. It starts with pumpkin cream as a starter and turkey, in its juice and with cranberry sauce, as the main. Next to it, green beans, mashed potatoes and mashed sweet potatoes. For dessert, rhubarb tart with cream. 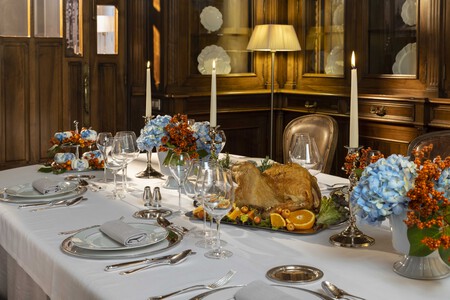 In the cup, two American wine deals such as the Dundee Hills white (from Arterberry Maresh wineries, Oregon) and the Squisto red, from Halcon Vineyards (California). All for a price of 75 euros and only enjoyable on the 25th. In addition, they offer delivery and take away for those who want to enjoy it at home.

More informal and very American is the offer that New York Burger offers. Reissuing a classic with which they have been working for several years, they propose a Turkey Breast and Thigh Menu, Gravy, Roasted Applesauce, Sweet Potato Mashed and banoffe with hot caramel, available in all its restaurants (both in Madrid and Barcelona), which you can consult here and which can be enjoyed until Sunday. 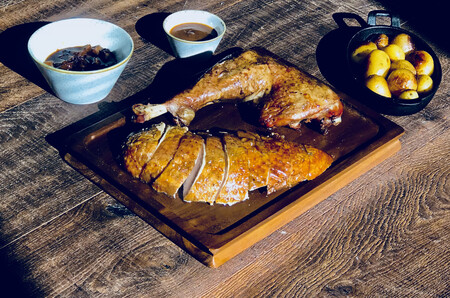 The New York Burger proposal includes turkey breast and thigh, as well as side dishes and dessert.

In Barcelona there are also options, such as the Hard Rock Café (Plaza de Catalunya, 21), which in this case proposes an open menu. On the one hand, the roast turkey with its garnishes and, separately, the pumpkin pie for dessert. In addition, they recommend pairing it with a vodka and coffee cocktail.

Pixar’s ‘Turning Red’ to premiere directly on Disney Plus

All the ways to have Android TV on a Smart TV