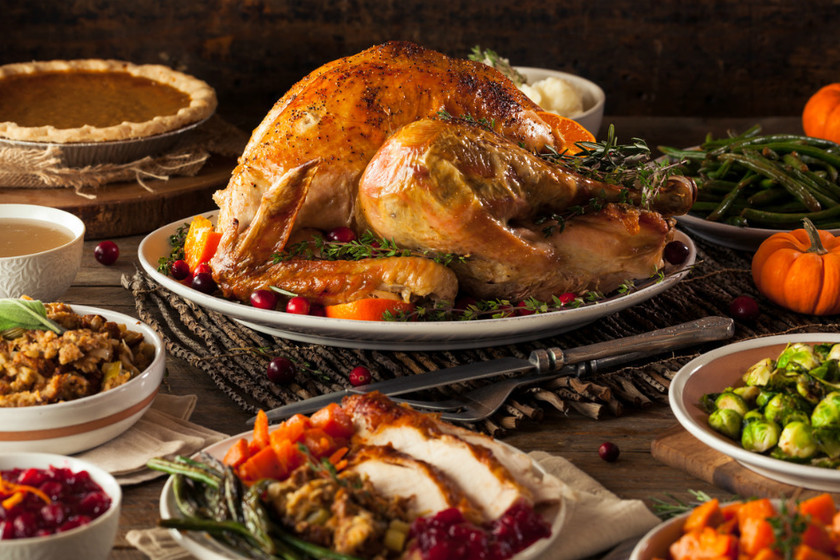 When carols and polvorones attack me each year at an earlier date, I almost dream of having a holiday as important as Thanksgiving for Americans, a holiday that is increasingly present in Spain.

Whoever follows the American press or its regular series will have already had a glut of Thanksgiving from a distance, and is that it monopolizes all the attention these days. Besides the turkey, do you know how it is the typical Thanksgiving menu? We suggest you imitate it with our own version through these recipes.

We have already commented that the typical dishes of today would not have much to do with what the pilgrims ate, but it does not matter. Traditions evolve and settle in popular culture becoming something special, and that is that in reality there are no two identical Thanksgiving menus. Of course there are the “classics”, but in each house there are variations according to tastes and customs own of the family. So you don’t have to follow any recipe to the letter, but with these suggestions you can create a delicious Thanksgiving-style menu.

The turkey, king of the show

Let’s start with the important thing: there is no Thanksgiving without turkey, or without a vegetarian version. It is the main dish around which the entire menu revolves, the one that requires the most preparation and the utmost care, since despite its simplicity it can be easy to spoil it. It is a very large animal, perfect to satisfy the appetites of large families and from which always, always there is meat left over. In fact, leftover turkey is another delicacy many Americans dream of, ideal for sandwiches and other dishes.

Normally it is bought frozen and that is why you also have to remember to take it out in time to start roasting it well in advance. Important points: correct the cooking time, achieve a juicy meat with a well browned exterior, and that it is not too dry or bland. We have a very simple roast turkey recipe in the purest US style, without complications. Of course, there are also those who prefer it fried, although it would not be my choice.

It must be admitted that turkey meat is a bit dry, no matter how much we are the kings of the roast and we smear it well with butter, oil or broth. Eating it alone is unthinkable in a good Thanksgiving dinner, and it is that the sauce or gravy plays a key role. It’s another one of those must-have menu items for which each family keeps its secret. Although it seems that in recent years many people prefer to play it safe by buying the sauce directly in a jar.

But if you prepare well, the gravy takes on its own prominence and ends up watering all the other dishes on the table. It’s actually a simple meat sauce that starts with a roux and it is cooked with broth, without haste to avoid lumps. Here is the recipe to fix a roast without sauce, or you can prepare a multipurpose sauce for meats that also works with salads.

We finished the basic trilogy of the Thanksgiving menu with the other must-have topping, the famous cranberry sauce or cranberry sauce. Surely many of you met her for the first time watching a series or movie -in my case it was Friends and its legendary chapters of Thanksgiving-, in those days when we did not know that cranberries and blueberries existed. The cranberries They are very typical in the United States during the fall, although in Spain they are still difficult to find, and they are usually at exorbitant prices.

So we can go easy and serve our turkey with jam or compote, of red cranberries or some equivalent: currants, raspberries, blueberries, blackberries, etc. This sauce does not have as many followers as the previous one, and in many houses they prefer to buy a jar and save the step, but I recommend you try the recipe for baked red fruit jam. It is a delight that combines wonderfully with roasted meats as in this case.

The concept of “stuffing” in Thanksgiving turkey is always curious to us. At least I am struck by the fact that such a caloric and satisfying dish is prepared to accompany an already gargantuan menu, taking into account that It is served next to the turkey, and not inside. That is, the logical thing would be to fill the bird with ingredients such as fruits or vegetables with some fat, but the traditional stuffing it would end up drying it out more.

In this dish there are many variations according to the special touch of each family, although the base is cubes or coarse breadcrumbs, usually corn or a rustic loaf, with bacon, sausage, nuts or fruit, cheese, some vegetables … In the turkey recipe you have the instructions to prepare a stuffing very easy classic, which is usually served in a dish as a garnish.

To open your mouth and prepare your stomach, many families in the United States prepare a comforting vegetable cream seasonal. In theory it is a light dish but I would say that it must fill up too much, considering that there is a lot more food later. The problem is that what they call creamy soup -creamy soup- is usually well loaded with cream, butter, milk, cheese and / or bacon, but there is no denying that they are comforting.

The most used vegetables to prepare in cream at this party with cauliflower, broccoli and, of course, pumpkin. I recommend opting for the first one in a recipe that does not add too many calories, using all the natural creamy potential of the same cauliflower. And it is preferable to serve it in small portions, that no matter how light they are, the vegetable creams are satiating.

I doubt there is any Thanksgiving table that doesn’t include mashed potatoes. A simple dish – apparently, at least – humble and very basic, but comforting and delicious. It also reminds us of our childhood and makes an explosive couple with salsa gravy. There are who likes it thicker, with a rustic texture in which you can see the potato, with bits of skin … Although almost everyone looks for a very creamy mashed potatoes.

It is certainly not a light garnish. The perfect mashed potatoes get its succulent texture thanks to the good cooking of the tuber and also to the added ingredients, such as butter or cream. Sure you have your trick to give it a special touch, but if you have never done a homemade mashed potatoes we have the perfect recipe to make it very creamy.

Between the garnishes or side dishes most repeated on Thanksgiving we find the green bean recipes, usually in the form of casserole. Americans use the fine or round variety and usually combine them with some variety of fried, glazed or candied onions, bacon or vegetables, and sometimes a creamy sauce to give them more flavor.

When the oven has too much work, it is also a good option to prepare the sautéed green beans so as not to complicate life further. A good recipe is that of green beans with grapefruit and nuts, with a different festive touch and quick to prepare. Actually, beans admit almost everything, so don’t be shy about innovating with different spices, an oriental sauce, some cheese or whatever you want.

Loved and hated in equal measure, I am a strong advocate for Brussels sprouts, and I love that they are typical for Thanksgiving dinner. Cooked and blandurrias are boring, bland and unappetizing, but when well prepared they make for a delicious light garnish that pairs well with roast turkey meat.

Again, we could enrich the dish by cooking them in the oven with cream, bacon and a good layer of cheese, but I think it’s better. dispense with fatty additives. Simple but tasty brussels sprouts with sage can be the ideal accompaniment to all kinds of meats, with aromas that will pleasantly surprise you.

Sweet potato rivals squash on fall menus and is also a must-have on a good Thanksgiving menu. Either roasted, mashed, in soup or in dessert, it is rare that he is not counted on at this party. I have always been struck by the traditional plate of sweet potato casserole with marshmallows, a creamy gratin topped with clouds of sugar that must be a bomb.

We prefer to opt for a simple garnish of roasted sweet potatoes with spices, lighter but very tasty. The aromas of this tuber mixed with autumn spices make it a very comforting dish It might as well be taken on its own on a cold night. And, of course, it makes good crumbs with turkey and its sauce.

If the family hosting the Thanksgiving feast has also prepared the homemade bread, will add many more points for the guests. With so many dishes to cook and so many diners, the truth is that it can be a nuisance having to deal with kneading and leavening, but in many houses they continue to maintain the tradition.

In the United States, a good party dinner is accompanied by tender rolls. There are many different recipes depending on the tradition of each house, but generally looking for an individual format of soft and fluffy crumbs, like the ones in this recipe for butter rolls. In some areas the pan de maiz, so you can also try the rich gluten-free corn muffins.

The final sweet: the cake or foot

What can you do after a very complete menu full of different dishes? Have dessert, of course. And on Thanksgiving the obligatory sweet is the type cake foot, genuinely American. If the family is large, it is normal for them to serve themselves several different cakes -make no one stay hungry-, and thus there are also no fights to decide which recipe to prepare.

You can make cakes of many different types, but there are some that are typical and traditional for this celebration. There is the pecan pie, too caloric for my taste, the sweet potato, the apple and of course, the pumpkin pie. I can’t help it and I opt for this last option, an aromatic delight that puts the perfect finishing touch to an autumn feast, and of which we have another more rustic version.

It goes without saying that there are many more options of different dishes to complete the Thanksgiving menu, especially when it comes to the side dishes. Nevertheless, with these recipes you can have a feast worthy of any American family, with our little particular touch. Prepare to have leftovers for almost a month, remember that it is part of the charm of this traditional festival.