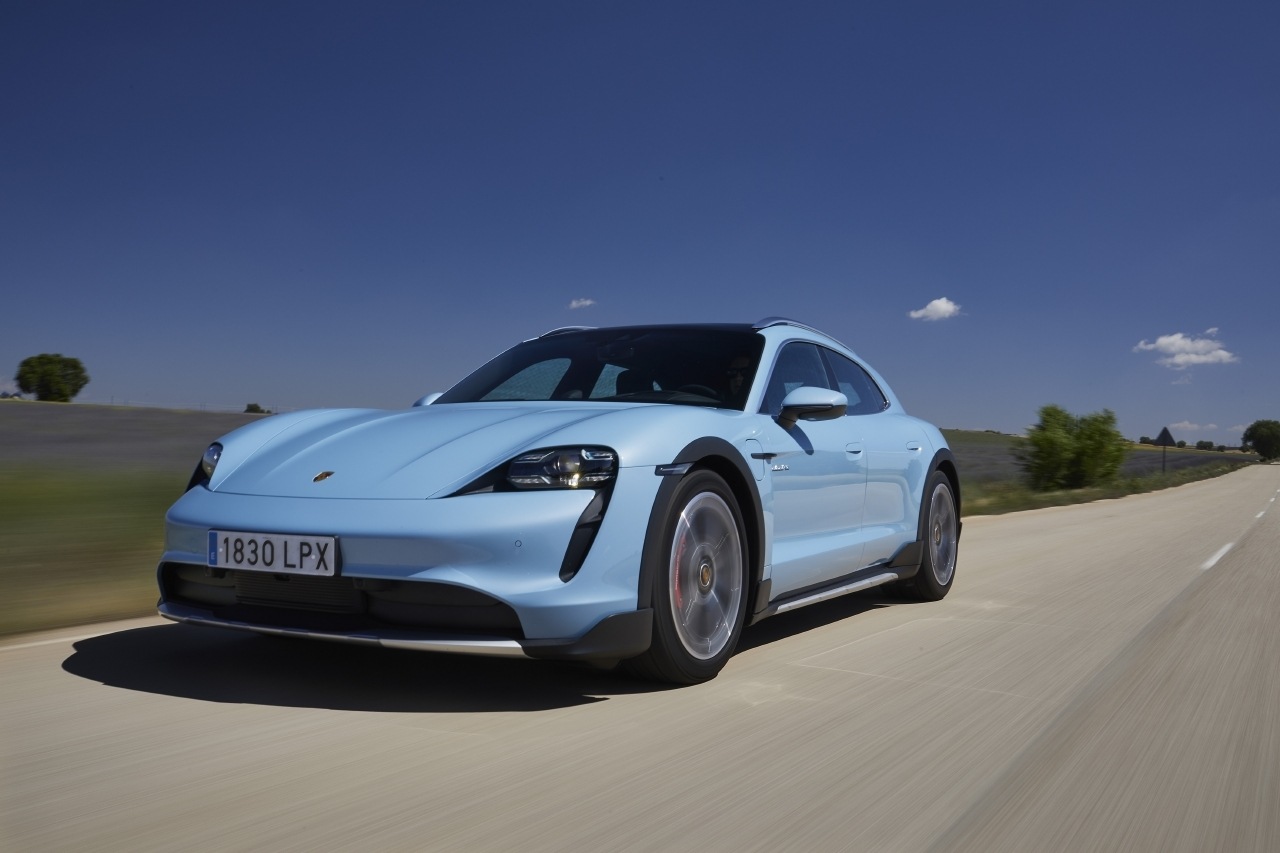 The most versatile and versatile model in the Porsche range is 100% electric. The Porsche Taycan Cross Turismo that we have driven during its presentation is much more than just a simple version of the well-known Taycan sports saloon. It seeks to please in three dimensions: sports car, saloon and SUV.

The second electric sports car from Porsche is a member of the Taycan family and offers the comfort of a saloon, the dynamism of a sports car and the livability of an SUV. The Porsche Taycan Cross Turismo It is the model that covers more dimensions of the range of the German manufacturer in a category called Cross Utility Vehicle (CUV).

The latest product from the Zuffenhausen factory has a more adventurous image but beware, it is not just a facade. Do not fall into the mistake of thinking that this new model is nothing more than a Taycan with black plastics on the lower part of the body. The Taycan Cross Tourism presents several singularities that differentiate it within the range.

The design is based on the Porsche Mission E Cross Turismo concept presented at the 2018 Geneva Motor Show. As is predictable, most aesthetic features are common with the saloon from which it derives, with some nods to the mythical Porsche 911, as is the case of the long and flat nose, the Led-Matrix headlights attached to vertical air intakes, flush door handles and a rounded rear with attached taillights.

The dimensions of length (+11 mm) and width (+1 mm) are almost identical but the Cross Turismo grows 30 mm in height, a noticeable increase. It almost goes unnoticed but the roof line is also different and the wider C-pillar, which has a positive effect on interior habitability, as I will explain later.

The offroad details typical of the Taycan Cross Turismo are evident in the Exclusive skirts on both bumpers, side sills, black wheel arch trims and 20- or 21-inch alloy wheels. The optional Off-Road Design package incorporates protective slats at the ends of both bumpers and at the end of the side steps. Roof bars are also part of the list of extras.

Logically, this electric vehicle does not have the exhaust outlets of a combustion vehicle. In the place where these would be, Porsche optionally proposes two hitches that allow the installation of a rack to carry up to three bikes and make the most of the country and leisure possibilities of Cross Tourism. Its design does not prevent the tailgate from being opened when in use.

A large gate that makes it easy to load the 446-liter boot (407 in the Turbo Cross Turismo and Turbo S Cross Turismo versions) which is 39 liters more than the Taycan saloon, although it is still not too striking a figure for a 4.97 m long car. If you are going to carry something large, the luggage tray can be easily placed behind the rear seats and the seats can even be folded down to obtain up to 1,212 liters in total. Also, he lowered the hood there is also a front boot with an additional 84 liters.

Entering the cabin is entering fully into the digital world. Except for those on the steering wheel, the physical buttons have been replaced by digital buttons, for better and for worse. The front seats have no less than four information screens.

In front of the driver, the digital instrument cluster with 16.8-inch curved display shows three round-cut virtual watches, combining tradition and modernity in the driving position. For its part, the front passenger has a touch screen integrated into the dashboard that can be controlled individually.

In the central part, the 10.9-inch screen of the infotainment system Porsche Communication Management (PCM) compatible with Apple Carplay and Android Auto. Underneath is the 8.4-inch Direct Touch Control panel that allows you to manage some navigation, telephone and charging functions of the vehicle, among other things. When dividing things between the two screens it can be somewhat confusing to handle at first, it requires a period of adaptation.

Despite the use of high-quality materials and superb settings, the interior of the Taycan Cross Turismo does not feel as sumptuous as a Porsche Panamera. The driver’s position is low and sporty and the bucket seat can have up to 18 electrical settings.

Behind the passengers of this Porsche enjoy significantly more headroom in the rear seats than the saloon thanks to the extended roof line of the Cross Turismo. This modification of the body shape allows you to enjoy Additional 45 millimeters for the head at the rear. In units with a fixed panoramic glass roof, the feeling of space is accentuated by making room for passengers up to 1.90 m tall.

Another difference of this CUV with respect to the Taycan conventional
the thing is rear seat occupants sit in a higher position, which will facilitate access and exit. If the unit is equipped with a four-zone climate control, the second row also offers a screen to control the temperature, the air flow and the heating of the seats.

The Taycan Cross Turismo range at launch will consist of four 100% electric versions. All of them have all-wheel drive as standard driven by two permanent magnet synchronous motors (one on each axis), Launch Control function and the Performance Plus battery. This battery pack has a gross capacity of 93.4 kWh (net 83.7 kWh), consists of 33 modules with a total of 396 cells and is based on 800 volt technology.

The most radical variant is the Taycan Turbo S Cross Turismo, which has the same power as the previous one in normal use but is capable of extracting more vitamins with the Launch Control’s overboost function. In this way, it shows a power of 625 hp / 460 kW (increases to 761 hp / 560 kW with the Launch Control function), accelerates from 0 to 100 km / h in 2.9 seconds and its range is 388 to 419 km.

The maximum charging power with direct current (DC) is 270 kW, a spectacular value where the difficult thing will be to find ultra-fast charging points. To get an idea of ​​the charging time from 0% to 100% at charging stations normal, we must calculate that it takes 10.5 hours at 9.6 kW and 5.0 hours at 22 kW, to give a few examples. As this is a touchdown, it is not possible to faithfully observe the actual electricity consumption but it seems possible to be around the homologation according to the WLTP cycle where the figures are between 22.4 and 26.4 kWh / 100 km.

As with the Taycan saloon, the Cross Turismo has impressive road performance. The Taycan Turbo S Cross Turismo is capable of passing 0 to 200 km / h in 9.7 seconds so as you can imagine the acceleration is intense and immediate and the cornering relentless. If you opt for the Porsche Electric Sport Sound We are accompanied by an active sound system that projects a characteristic sound making dynamic driving.

The braking capacity is prodigious, especially considering that it is a model that weighs more than 2,300 kg. Depending on the version it is possible to choose the system Porsche Surface Coated Brake (PSCB) with iron discs with a ceramic coating and the system Porsche Ceramic Composite Brake (PCCB) high performance ceramics.

The Porsche Recuperation Management (PRM) system can use up to 90% of braking energy to recharge the battery, increasing the range. Paddles behind the wheel are missing to manage retention capacity simply and quickly.

As a traveler, the crossover variant of the Taycan is comfortable and quiet. On long trips you take advantage of the Porsche Intelligent Range Manager, an assistant that automatically manages the air conditioning, cruise control and other elements to achieve the best possible autonomy depending on the route.

The adaptive air suspension Allows you to raise the height of the German CUV body and adapts the damping stiffness according to road conditions and driving style. In this way he can allow himself the duality of turning flat in curved areas but being smooth in a straight line. And what about his country skills?

Air suspension leaves the Taycan Cross Turismo body 20mm higher than the Taycan. A distance that increases with the Off-Road Design optional package with which Cross Tourism achieves 30 millimeters extra ground clearance that they are welcome when we get off the asphalt.

It is not an off-road or reaches the capabilities of a Porsche Cayenne, of course, but it does allow driving on roads and paths with simple obstacles. In addition, among the driving modes, the Gravel mode, exclusive to the Taycan Cross Turismo and based on the one in the Cayenne, which optimizes traction on slippery terrain, for example, dirt or mud. Versatility with capital letters.

The Porsche Taycan Cross Turismo is already on sale in Spanish dealerships for a price that starts at 95,995 euros. A versatile model that is another step on the road to electrification of Porsche. The German brand foresees that in 2025 half of its sales will be monopolized by plug-in hybrid or 100% electric models.