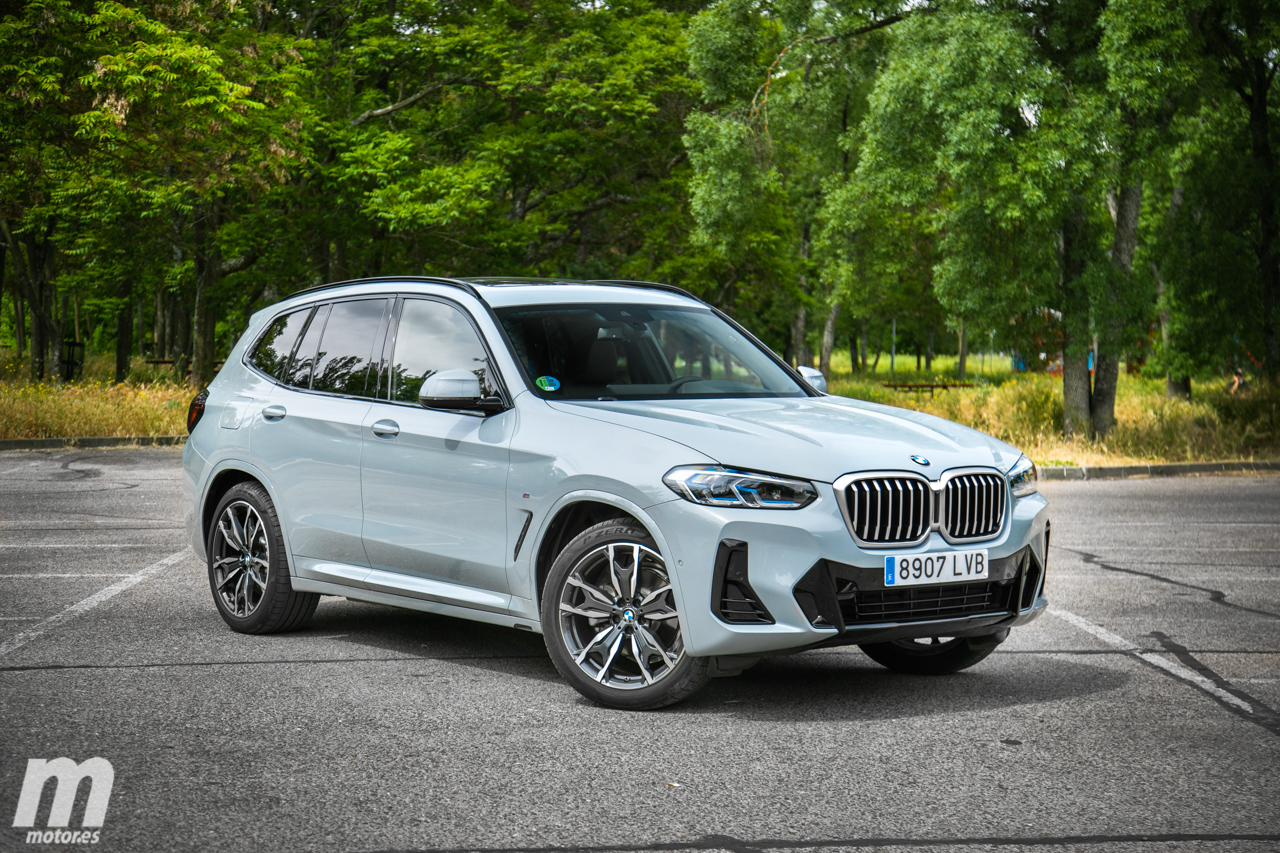 Larger, luxurious and technological. The current X3 is what the X5 was once. The new generation has grown in every way, and to check how it is we have put the BMW X3 20d to the test.

Just like human beings, the new generations of cars are bigger than the previous ones. Bigger, heavier and more luxurious. BMW SUVs have suffered from gigantism in recent years. The arrival of new units in the family has forced the Germans to separate their more traditional models. The new BMW X3 is as big today as the X5 was originally. A size that seems excessive and that makes us rethink several things.

Currently the best-selling BMW on the market is the BMW X1. The compact SUV has won over many buyers for a variety of reasons. Balanced price, technology, design, but above all by positioning. With a length of 4.45 meters long, the size, habitability and trunk volume seem more than enough for the vast majority of drivers. However, there will always be those who want a little more of everything, and that is where the new figures of the X range come from..

Where before there was only the BMW X5, today the BMW SUV range supports up to seven different models; from the X1 to the BMW X7. With a very clear positioning, each unit offers different purchase reasons. The mid-range, stipulated by the X3 and X4, has recently been updated, receiving a small aesthetic facelift. and new technologies to remain attractive in the face of the increasingly numerous opposing offer, dominated by the Mercedes GLC, the Audi Q5, the Alfa Romeo Stelvio or the Lexus NX.

But going back to the X3, it must be recognized that the increase in size has brought with it numerous improvements. The quality is very significant. With elements of nice touch and good feeling, the way of execution is impressive. For me BMW today has the best interiors, both in quality and manufacturing. The sensations that it transmits are better than those of the X1, but not as high as those of the X5 or X7, which continue to be, despite the growth of inferior models, the flagships of the house.

The most excellent technologies and finishes of BMW are reserved for them. However, the BMW X3 looks many systems, some focused on improving occupant safety and most on delivering a premium user experience. The list of elements is remarkable, standing out above all systems such as the laser headlights, the digital instrumentation, the multimedia system with a 12.3-inch panel, the sunroof, the electric and heated seats, the lighting system, the access and keyless start and much more.

Every modern gadget and tech you can think of is on board the X3, though check your wallet because some of those trinkets don’t come cheap. That’s the problem with premium brands. Although they tempt you with a starting price that you could assume, adding optional elements and giving them a little more of their own personality is very expensive. BMW sets a starting price for the X3 of 52,600 euros. The test unit reached a final price of 80,000 euros. A lot of money.

Whether or not it is worth it will depend on each one. What the X3 offers in return, in addition to attractive design, high quality and extensive equipment, is generous interior space. Five passengers can go very comfortably. The rear three enjoy plenty of legroom and headroom, although the central occupant will have to contend with an intrusive transmission tunnel and a tighter, tougher plaza. Despite the generous width, an adult will not be able to travel in the center while the side seats are occupied by child seats.

When buying an X3, BMW offers us various mechanical alternatives. From the 150-horsepower sDrive 18d version to the imposing 510-horsepower BMW X3 M Competition. In between, we find different diesel models, gasoline and even a plug-in hybrid with 292 horsepower and 49 kilometers of electric autonomy. One of the most logical bets is the unit that I have been able to test, the xDrive 20d with 190 horsepower and MHEV system with the DGT ECO label.

Today the “label” factor has become a very important sales argument. To avoid the regulations, manufacturers have conceived the Mild-Hybrid as an intermediate and cheaper solution. The light hybrids have a 48-volt auxiliary electrical system that allows minimal savings in consumption and emissions. They are not hybrids as such because they do not get to move 100% electrically, but in the eyes of the regulations they are, and therefore they enjoy the advantageous ECO label.

The X3 20d has the flattering environmental badge that allows it to avoid the increasingly common low emission zones or anti-pollution protocols. An important advantage to take into account that we can also see in the sDrive 18d version. However, A very common question that the buyer of the X3 may ask is: what engine did I buy? In my opinion, unless you have a lot of money to spare, diesel is the best option.

Moving the almost two tons of weight of the X3 with a gasoline engine can mean going through the gas station more than usual, and taking into account the price of fuel, it is something that we are not going to want to do. If you have a lot of money left over and you want the most of the most, there is the X3 M, a true surface-to-surface missile that impresses at the touch of the gas. An imposing beast, but expensive to buy and maintain.

The most logical thing is to doubt between the 18d, the 20d and the 30d, the three diesel options. While the 18d may fall short of performance, the 30d may be too much. The 20d is the most logical alternative of all. With a turbocharged engine, the 190 horsepower and 400 Nm of torque are more than enough for 95% of situations., although I admit that your ass weighs you down. At the end of the day, the problem with growing in size is also gaining weight. With 190 horses a first or second generation X3 ran like bullets. In the current model, responses are very restrained.

Acceleration is very progressive. The engine pushes, but the weight weighs down the response. The car picks up speed without major problems, but it also depends on the selected driving mode. With ECO, Comfort and Sport formats, the response is variable. From more to less relaxation, the ECO mode limits the response of the throttle and the engine so that the speed gain is very gradual. You have to tread really hard to receive a considerable response. More noticeable response in Comfort mode and even more so in Sport mode.

But the lack of oomph has a clear benefit; the consumptions. Until now I have complained about the weight and dimensions of the X3, but I also recognize that BMW has done an excellent job in terms of consumption. Throughout the week of testing I have been able to drive the X3 in all kinds of situations. From stifling urban traffic jams to highway trips at normal speeds. After completing hundreds of kilometers, the on-board computer has shown an average consumption of 6.2 liters per 100 kilometers. A fact that for me is excellent.

In everything else it should be noted that the X3 is a great wheeler. Its comfort and insulation allow you to roll hundreds of kilometers without flinching. Traveling by road is his thing, being somewhat more clumsy in the city where the dimensions emerge once again in the negative. Long road trips with autonomies close to 1,000 kilometers. You can not ask for more and, after all, it is what a typical customer of this type of SUV will ask for. Comfort and consumption above performance.

The BMW X3 20d is not typical BMW in terms of dynamics and performance. Being an SUV, it prioritizes other concepts such as ride quality, ride comfort, space and equipment. It must be recognized that in all these terms it is one of the best in its category, although its equipment does not come cheap. If you’re looking for typical “bemeuve” features you won’t get them, but I think that lack is more than made up for by other excellent skills.