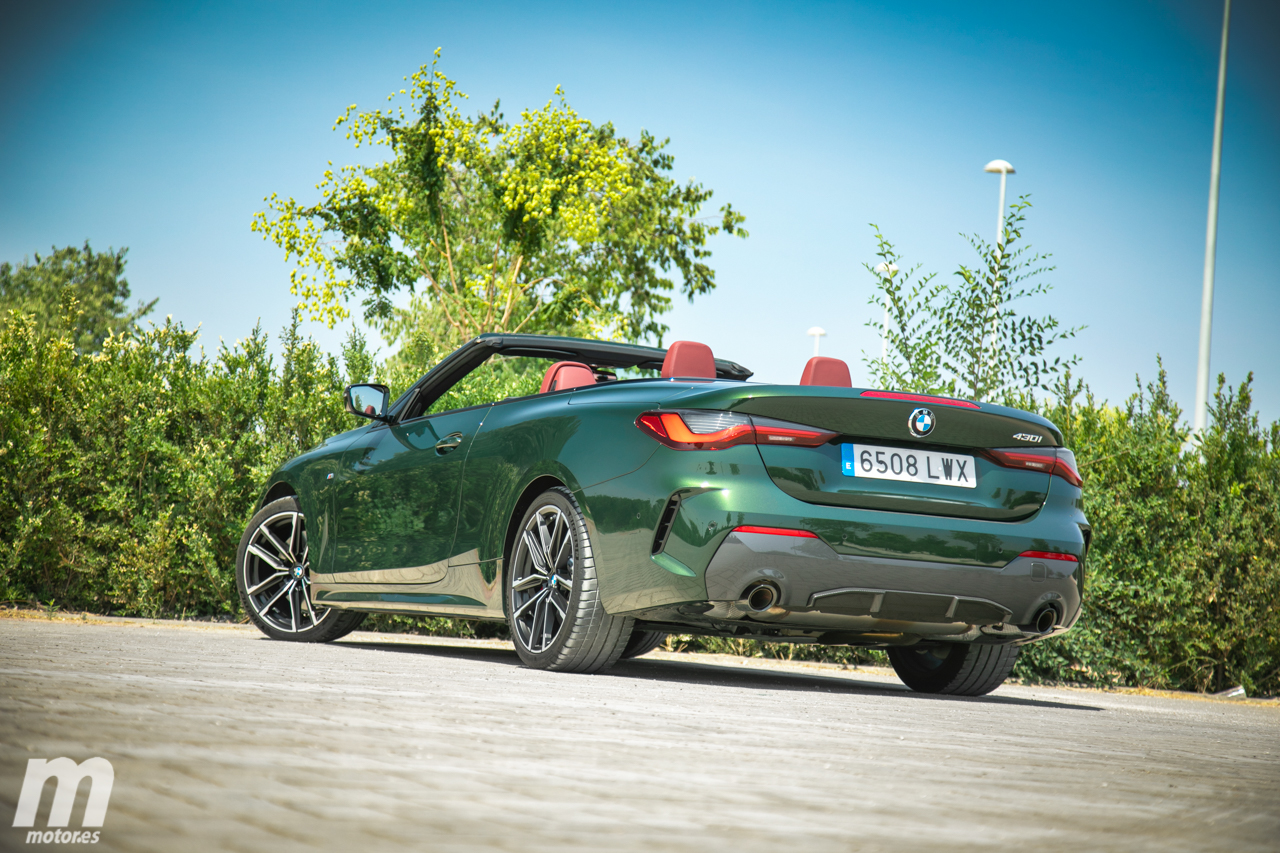 Is there the perfect road companion? The correct answer could be that it depends on each person and each case. However, I come to propose one that could come very close to an affirmative answer. The BMW 430i Cabrio is presented as a gallant within the diverse offer of current vehicles.

There are times when illusions and false expectations can play tricks on us. This is something that can happen with some frequency in the motor journalism sector, because a car in the end can disappoint you or, simply, not be what you expected. However, the BMW 4 Series Convertible has been an injection of what the automotive sector is capable of to provide a car that lives up to its legacy. What if I liked it? Let’s talk quietly about what I have come to call “the perfect partner”.

In 2020, when BMW unveiled the second generation of the BMW 4 Series, it was a shock to its lovers, as it radically changed the exterior image of a model much loved by most of the public. For this reason, it was initially highly criticized at the time, but surely no one, today, is capable of throwing “buts” to its general design. The 4 Series is a car that people like, and they like it a lot; but it likes it even more if we transform its slender Coupé or Gran Coupé figure into a convenient and elegant convertible.

The new generation of the BMW 4 Series Convertible took the long-awaited soft top for itself, abandoning the retractable hardtop after two generations of mid-size convertibles (BMW e93 and BMW F33). This option had great successes, such as the practicality offered by a “normal” roof against temperatures or possible acts of vandalism; however, it does shed more overall weight on the car, something that can directly affect its dynamics once all that weight is stored behind the rear seats and derives in a “restless ass”.

Beyond that, replacing the retractable hard top with a canvas solution is something that is always appreciated, since it also presents a more sporty and apparent image. Additionally, current canvas roofs are no longer even remotely similar to what we were able to know decades ago, since they now have good external insulation, both in terms of temperature and noise.

The canvas roof of the BMW 4 Series Convertible is not one of the quickest to fold or unfold, as it its mechanism completes this task in about 18 seconds; however, it has significantly improved the lag time of the previous generation, since it required a total of 32 seconds. The hood mechanism can be operated while driving up to a maximum speed of 50 km/h.

From BMW they affirm that the renewed mechanism, together with the new roof material (the canvas) provides a lower overall weight of it, reducing by 40% compared to the previous generation. This, in any case, will always be in black, since, for the moment, the firm does not offer alternative colors with which to decorate it, something that would suit the set remarkably well.

However, the Series 4 Cabrio does not change especially with respect to its coupé body brother, at least in general terms. Both bodies have the same dimensions: 4.77 meters long, 1.85 meters wide and 1.38 meters high. However, the complex mechanism reduces the space in the rear seats (especially in width), as well as in the trunk itself. Because of this, the BMW 4 Series Convertible only has homologation for two passengers in the second row of seats.

In terms of cargo space, The BMW 4 Series Convertible has a maximum volume of 385 liters in its trunk, under normal conditions. This capacity will be obtained when the roof is “on” and thus all the space can be used, which is very well used. Alternatively, once the roof is stored in its respective space, the volume of the trunk will be reduced to 300 liters capacity. This volume can be expanded by folding down the backrest of the second row of seats, which consists of a single piece and will give us the freedom to transport particularly long objects.

Beyond this, the model has a very practical and usable second row. Both seats have the convenient ISOFIX anchorages and with adequate space for the legs and head of its occupants. Yes, it is missing that the backrest is somewhat more inclined backwards, in this way it would gain some comfort since these, after a long road, tend to feel straighter than we would like. Additionally, a center armrest would also be nice.

Beyond the -spectacular- aesthetics of the BMW 4 Series Convertible and the possibilities it presents to be able to drive with the sky as a roof, BMW has made, additionally, the model feels particularly sporty through its different mechanics and its set-up.

In the first place, the Bavarian firm once again offers a catalog of mechanics linked exclusively to the sports automatic gearbox, as is already the case with the other two members of the 4 Series family (Coupé and Gran Coupé). Additionally, all its blocks will be gasoline or diesel and, only some of them, may be combined with a micro-hybridization that will provide it with the long-awaited ECO label of the DGT. These will be the M440i and 420d.

In gasoline there are 3 power levels from the denominations 420i Cabrio (184 CV), 430i Cabrio (245 CV) and the M440i Cabrio (374 CV). The first two will always be rear-wheel drive, while the most powerful of them may optionally have xDrive all-wheel drive. In diesel there is only a single power step with the 420d Cabrio mechanics and its 190 hp. Above these is only the BMW M4 Convertible and its 510 hp of maximum power.

BMW has also confirmed that the 4 Series Cabrio has new structural reinforcements in its chassis to compensate for the rigidity lost with the absence of a roof. This has led directly to an insurmountable increase in the total weight of the set, which reaches 170 kilos in the 420d and 430i versions, and 150 kilos in the M440i xDrive.

The unit that has passed through our hands is the 430i mechanical variant. It houses under the hood a 4-cylinder turbocharged engine that delivers a power of 245 hp and 400 Nm of maximum torque sent directly to the rear axle through an 8-speed torque converter automatic gearbox.

Read:  The 11 most common mistakes in the driving test

The sound of the engine in this car is noticeable with a particular roar, much better than in other models in the range (not counting the M440i or the M4). Even with the hood on our head and the windows closed, this sound will enter the cabin to make our driving more spirited. However, the speaker system also does its job and transmits some of this sound through its speakers.

The BMW 4 Series Cabrio will be a car with which we will travel very comfortably on long routes; little or nothing we will notice a generalized fatigue, because its seats and the driving position itself will contribute effectively to this hardly being noticed. The driver sits quite low in this model, although not as much as in other vehicles with a more pronounced sportiness, and visibility to the outside is remarkable through any of its three rear-view mirrors or the general glazing of the model.

Driving at high speeds on a stretch of motorway, for example, with the top down and the windows closed, no more external noise will be perceived than is received in other body variants, such as in the coupé, although In peak hot hours, less insulation will be noticed in the passenger compartment and, therefore, we will have to pull the always praised air conditioning. For these moments in which we want shade but at the same time not “isolate” ourselves from the outside, the 4 Series Cabrio gives us the possibility of opening the four side windows, and being able to walk with a huge hole on each side without the uncomfortable turbulence that can provoke the B-pillar, since this model completely lacks such an element.

However, this is a convertible and whenever we can, we will carry the hood stored in the rear area of ​​​​the passenger compartment (as a server). Even driving at high speeds, the passenger compartment is quite well isolated from the wind or external turbulence, even being able to hold a conversation in a not too high tone. For this, it will be quite convenient to make use of the folding deflector that will be located on the rear row of seats and that is offered as part of the “Convertible Package” that we can select for an additional price of 2,026 euros; This also includes comfort access, heating in the steering wheel and seats, as well as the so-called Air Collar, a scarf of hot air that comes out from the head of your front seats. Who said convertibles were just for summer?

Leaving aside the most important fact (that it is a convertible), the dynamics of the BMW 430i Cabrio is excellent. This mechanism is positioned intermediately between the most economical alternatives and the most sporty, presenting itself as a midpoint that makes it the ideal engine for practically all buyers.

If you want to go quietly, the car will be very comfortable, stable and, additionally, it will not burn too much fuel; while if you are looking for an extra touch of spice, the model will accompany you wherever you want, with a more than delicious sound emitted by its double exhaust outlet, a very rigid and communicative steering, as well as gear changes made at the ideal moment of each of the possible situations.

As I say, in addition to all this, gasoline consumption will not be excessive if we take into account the number of jerks that we have available under the right pedal. Driving on the highway at a legal speed and with air conditioning activated, the consumption generated by the 430i Cabrio was just 6 liters, a figure more than outstanding. On the other hand, if we are regular users in urban areas, the average figure will rise to numbers closer to 9 liters on average. As I say, more than correct figures for a vehicle of this level.

The occupants of the rear seats, for their part, will have some additional inconvenience when traveling without a hood, as they will receive all the wind in their faces, something that can become overwhelming at certain times. For long journeys in which we want to get rid of the roof, the best thing will always be to take this car as a nice two-seaterthus we will ensure greater comfort for all.

The BMW 4 Series Cabriolet, and more specifically the 430i engine, has seemed to me, directly, the best option of the entire catalog of mechanics that this car has. It is the version that offers a better balance between comfort and sportinessat the same time that it leaves us with very contained consumption if we take into account the capacities it possesses.

However, not everything is good words for him, and it is time to talk about the always tedious economic issue. The BMW 4 Series Cabrio starts its sale at 59,500 euros with the 420i engine; the 430i mechanics, meanwhile, has a starting price of 64,300 euros, a fairly considerable economic amount if we take into account the number of options that BMW will give us to customize our unit, such is its catalog of extras that this model can quickly flirt with 90,000 euros; a totally exorbitant number.