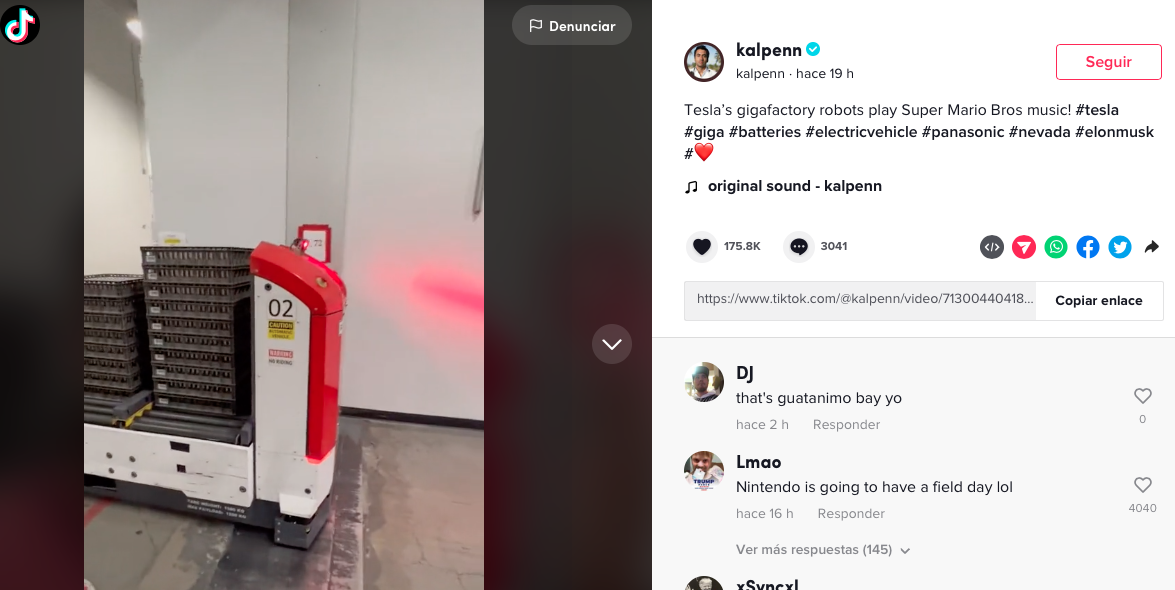 Technology is one of the most important industries in the world, that is why many people want to know how this sector works. Recently it was revealed how the popular Tesla gigafactory that stands out for its incredible size, technology and high level of production of electric vehicles, but this time it stood out because in the factory it transports the merchandise to the rhythm of the popular sound of Mario Bros.

Tesla is the leading company in the electric vehicle industry, where in 2021 reported which produced approximately 305,900 vehicles worldwide. Elon Musk’s company has five different factories in the world, such as Fremont in California, Shanghai in China, Austin in Texas, Berlin in Germany and one in Nevada dedicated to the production of motors and batteries.

Robots to the rhythm of Mario Bros

Following a post by actor Kal Penn, he showed how Tesla robots work at the Nevada Gigafactory transporting merchandise from one place to another using the classic tone of the Mario Bros.

“I am in the Tesla Gigafactory and there are robots playing Super Mario Bros”, says the actor in his video shared on TikTok.

The fun way of working went viral on the social network. In the recording you can see how the robots transport components for the production of Tesla vehicles, they seem to include speakers at a volume low enough not to disturb the workers. But with the intention that the typical Mario Bros music is recognized when someone passes a few meters from them.

It is the first time that something like this can be seen in one of the Tesla factories, the truth is that the company has added fun features, but there is really nothing functional in its different vehicles.

The Tesla Gigafactory in Nevada also has other oddities that could be much more useful and interesting, where one of them is that the roof becomes a place to install solar panels in order to power the plant itself.

As yet another example, the company added the feature of the Tesla Model X dancing through the ‘Party Mode’. In particular, this one plays a melody at maximum volume while synchronizing the light and the movement of the door to the rhythm of the music.

There is also an option for car seats to make a fart sound, or even a racing game where the driver is the driver of the car itself.

It is not the first time that some feature of the Nintendo video game has been used, where even on one occasion the Popular Party candidate for mayor of Guadalajara, Antonio Román, launched a campaign inspired by the classic game where as he faced challenges It showed the campaign promises with which he seeks to win the vote.

In conclusion, this type of detail often surprises and draws the attention of consumers themselves, for using iconic characters around the world.

Elon Musk sells millions of shares of Tesla because of Twitter