Bullfrag
Home Entertainment terrifying, suspenseful and sharp as an ax 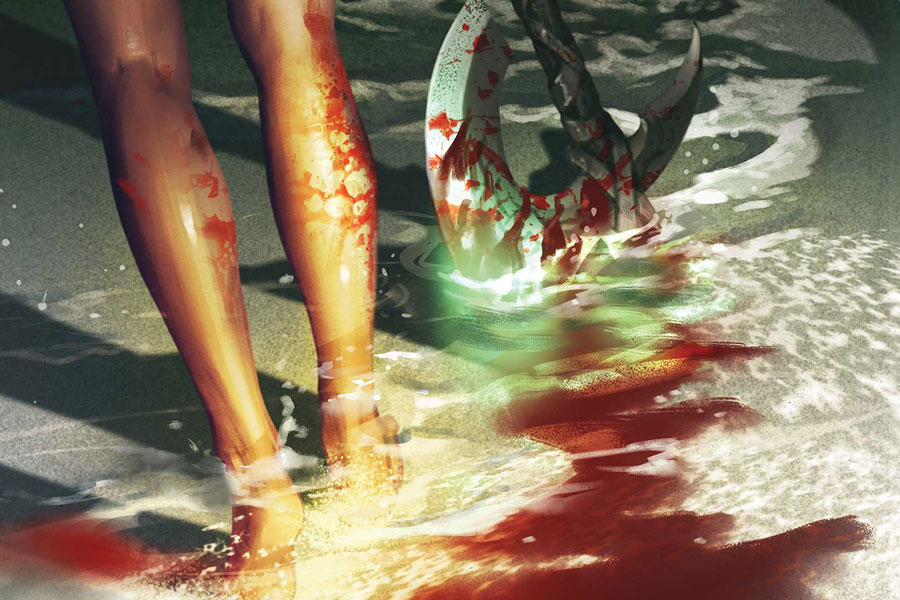 Facebook
Twitter
Pinterest
WhatsApp
Juliet Bennett Rylah analyzes Basketful of Heads by Joe Hill and Leomacs, the title with which we began the publication of the Hill House Comics collection.

If you like exploitation movies, final girls and retro horror full of plot twists, give Basketful of Heads a try. It is the first series published by the DC Black Label horror label, Hill House, directed by horror / fantasy author Joe Hill (Locke & Key, NOS4ATU, Heart-Shaped Box) and is now available in Mexico for reading.

Be clear, not all Hill House stories are written by Hill himself, but Basketful of Heads is. As a fan of Hill’s 20th Century Ghosts and the Locke & Key series, I was excited to see this book.

Index hide
1 The story that tells Basketful of Heads
2 With you … Leomacs
3 June, the final girl of Basketful of Heads
3.1 Juliet Bennett Rylah writes about horror comics and the dark side of superheroes for DCComics.com. You can see more of her articles on WeLikeLA, TheLAnd and No Proscenium, and be sure to follow her on Twitter at @JBRylah.
3.2 Order this creepy title now in our online store
4 DC Black Label – Basketful of Heads
5 It is also being read

The story that tells Basketful of Heads

The supernatural story takes us to Brody Island, Maine, a patch of land isolated from the rest of the world except for a long bridge. It’s the kind of seemingly idyllic place where you go to eat ice cream cones on the beach while listening to Bruce Springsteen on a boombox. It’s the end of the summer, 1983, and our heroine, June, has come to the island to visit her boyfriend, Liam. She is young and blonde, wears a pair of denim shorts, and has a freckle spot on her face. The typical American girl.

Liam is training to be a policeman and has spent the summer helping the local department – a group of good guys – with their various assignments. As their practices have come to an end, June and Liam should be able to relax and enjoy the last rays of the sun. Unfortunately, just hours after June’s arrival, four inmates escape from the nearby prison and a storm hits the coast. Waves hit the bridge next to a cheery sign that says it’s not too late to turn around and stay at Brody, but it may be too late to leave. It’s a dark and stormy night on a remote island with some escaped criminals. All the boxes of the urban legend are checked.

These increasingly complicated events end up leaving June to her fate. She is quite capable, but unbeknownst to June, the ax she takes as a weapon is enchanted. Even when he beheads an assailant, he leaves him partially alive. Hence, June’s quest for survival soon wins her – that’s right – a basket full of heads, each with their own opinion, agenda, and manipulations.

The illustrations in the book come from Leomacs and contribute to the nostalgic and foreboding feel of the story. The golden day turns into a blue and rainy night. The tattered American flag that June hangs above her basket, the yellow raincoat she wears, and the bloody ax she wields make her look like a deformed Little Red Riding Hood.

READ:  Actor may have revealed Grogu's death in the Mandalorian

The art also reveals clues that June has yet to see. For our heroine, the night is always full of surprises, twists and turns. Each answer opens up more questions. The absurdity of his situation leaves a lot of room for black humor – at one point he accuses a severed head of “trying to get inside my head” – but the probabilities presented to him keep things tense and more than dangerous. .

June, the final girl of Basketful of Heads

How June handles each challenge is part of what makes it fun to support her. As someone who consumes a lot of terror, I am often disappointed by disposable characters who do all things wrong and seem completely incapable of coming up with a single good plan.

June doesn’t always make the right decision, but she knows how to get out of a tight spot. She is smart, resourceful, a bit crude, and difficult to intimidate. It never falls apart and, as one of its enemies puts it, “takes a beating and keeps going.” The lengths you go to to survive and save your loved ones are endless and often bloody; don’t worry, only part of it is from June. She is also innately curious, so she insists on solving the island’s conspiracies and getting to the bottom of her paranormal ax.

The other characters are not bad either and the dialogue between them is very funny. The convergence of personalities adds a bit of frivolity, but say in what way would spoil it.

Basketful of Heads is a fun and gritty read for anyone who wants a horror story with a clever female lead who transcends her archetype. It is also a good book for fans of Joe Hill and his father, the horror legend Stephen King, thanks to some Easter eggs it hides. The prison from which convicts escape? Well it’s Shawshank, located in Derry County, Maine.

Juliet Bennett Rylah writes about horror comics and the dark side of superheroes for DCComics.com. You can see more of her articles on WeLikeLA, TheLAnd and No Proscenium, and be sure to follow her on Twitter at @JBRylah.

Order this creepy title now in our online store

June Branch is in trouble. She is trapped on Brody Island with nowhere to run. Her boyfriend, Liam, has been kidnapped. And four escaped bloodthirsty convicts will stop at nothing to find her.

All poor June has to defend herself with is a strange Viking ax, with the terrible power to decapitate a person and leave their head alive and talking.

If she wants to save Liam, and herself, June will have to keep a cool head… Or maybe a whole basket full of them!

The feminism documentary you must watch on Netflix

Insomnia in quarantine? 10 tips to get your sleep routine back