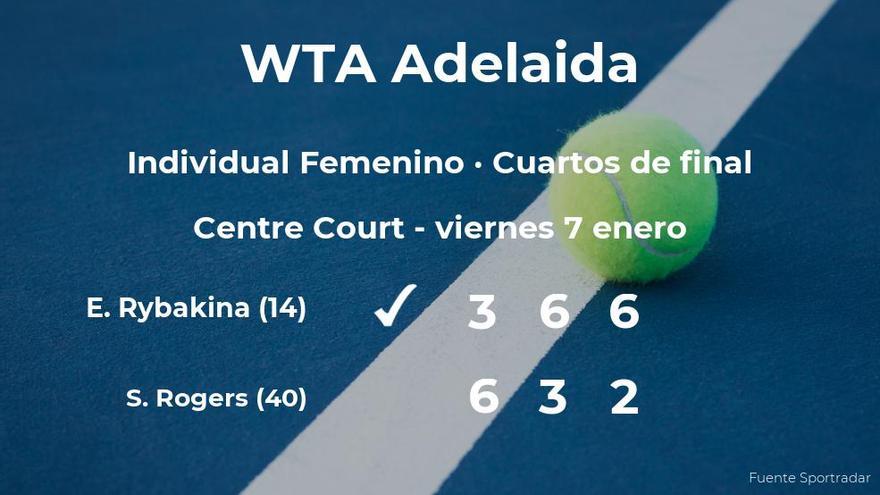 Elena Rybakina, Kazakh, No. 14 in the WTA and seed No. 7, fulfilled the odds by winning by 3-6, 6-3 and 6-2 in two hours and eight minutes to Shelby rogers, American tennis player, number 40 of the WTA, in the quarterfinals of the WTA 500 tournament of Adelaide. After this result, we will see the winner of the match in the next phase of the WTA 500 tournament in Adelaide, the semifinals.

During the match, the Kazakh tennis player managed to break her rival’s serve 3 times, achieved 54% in the first service, committed 3 double faults and won 70% of the service points. As for the American, she managed to break serve on one occasion, her effectiveness was 63%, she committed 3 double faults and got 62% of the service points.

During the semifinals, the Kazakh tennis player will face the winner of the match between the Japanese player Misaki doi and the Slovenian player Kaja juvan.

The celebration of the tournament Adelaide (WTA Adelaide) takes place from January 2 to 9 on an outdoor hard court. A total of 48 tennis players participate in the tournament. Of all the applicants, a total of 30 reach the final phase among those who qualify directly, the winners of the rounds prior to the final of the championship and those who are invited.

This change speeds up Ubuntu, although it puts your security at risk

improved cutscenes, side missions and more

Vodafone gives away an iPhone 13 Pro when filling out a survey. Don’t bite, it’s a scam