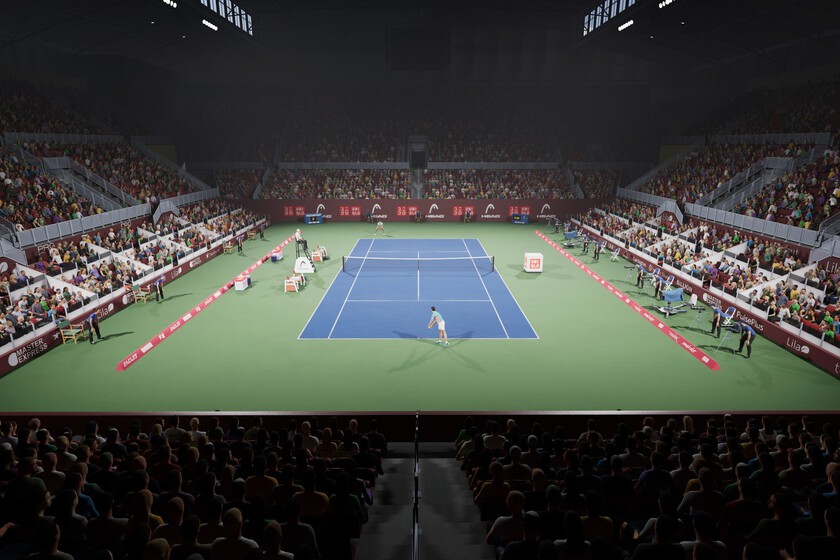 I have a feeling that the analysis of Matchpoint: Tennis Championships could have been radically different if three or four basic aspects of the game had been briefly touched upon. Not that we would have changed from bad to good, mind you, we are actually at a point where the jump would have been from good to great, but the feeling is bittersweet.

Hand in hand with great and original ideas that make Matchpoint: Tennis Championships in a unique tennis game with its own entity, the lack of time and budget leave it in an uncomfortable position in which, as we have been discovering game after game for a few years, the kings of the genre remain unbeatable.

Matchpoint: Tennis Championships stumbles on the same stone that dozens of previous tennis games have come across. And it is not the fault of a very modest list of official tennis players – there is Alcaraz, by the way – or some animations that are far from the best that has been seen in sports games.

Your problem, actually, is something as simple as the lack of variety. But let’s not delve into that well yet, there are many good things to highlight about a game whose gameplay has seemed to me to be the most original and addictive.

With the idea of ​​getting as close as possible to the simulation, the games of Matchpoint: Tennis Championships they are far from that more arcade-style frenetic rally that we all have in mind, but he lands his actions with an idea that could well be a little closer to a more casual style.

After each hit, when pointing with the joystick where we want to send the ball, a small cursor will appear in the opposite field that we will have to hurry as much as possible to place the ball where we believe it is convenient.


It’s not easy going to save the opponent’s hit, prepare the hit and aim at the limit of the line, but the truth is that it turns the games into a most entertaining give and take in which rarely, if ever, you think you are facing an unfair confrontation. The fault, in a sense, is always yours.

The most interesting thing about the mix, however, is the artificial intelligence of the opposing tennis players and how the game changes from one match to the next. Through a system of strengths and weaknessesthe difference between facing one or another tennis player is really palpable in each set.

In fact, finding that weakness that will allow us to play more comfortably against our opponent will always be one of our great tasks at the beginning of each game.

We will have to test his possibilities by playing differently, both from afar and going up to the net, with impossible volleys or short shots that leave him sold, and when the tennis player brings up his mistakes, a warning will indicate what weakness we have found so that we can continue to take advantage of it throughout the match.

Read:  The 11 keys that the trailer for 'Thor: Love and Thunder' leaves us

It greatly helps each match feel different, which, added to the small changes in aggressiveness as the match develops, provide some variety, but once you get the hang of each rival, what you have ahead of you is a succession of rallies in which, although the challenge is still there, it is easy to end up squeezing the cheese that turns the game into a walk.

Where I have collided head-on is precisely in that last stretch, at the moment in which you have already dominated the match but you still have a long walk ahead of you because games, sets and matches are unnecessarily eternalized during each tournament.

Jumping between competitions of several rounds, some training test without great fanfare and unlocking cucamonadas that improve your statistics and appearance, the career mode does not take long to become too much slow and repetitive.

It hasn’t taken me long to miss tests that provide some freshness, such as training sessions with mini-games that help disconnect from the routine of long games, different modes that break with the usual dynamics -such as doubles that have not been taken into account in everything the game-, or competitions that really feel different and unique beyond the change of track and rivals.

Between grinding ATP points, going to training to improve scores and measuring yourself against other players in online mode, Matchpoint: Tennis Championships it exhausts all its possibilities before you have even begun to savor them.

With a panorama in which the tennis game genre has become a complete and bleak desert, the arrival of initiatives such as Matchpoint: Tennis Championships They are the perfect excuse to remember everything we love about this sport and its jump to video games.

It never rains to everyone’s liking, of course, and those who are looking for a launch loaded with ambition and big budgets here may run into a fairly complex wall to overcome.

Those who do it with the mere intention of having a good time and enjoying their rallies and changing rivals, will probably find in Matchpoint: Tennis Championships a good challenge to get lost in during the summer.

The Constantine series receives an update from HBO Max

Battle pass progress could be shared between 2