Bullfrag
Home Uncategorized Telmex leaves the user without internet for 3 days; is the... 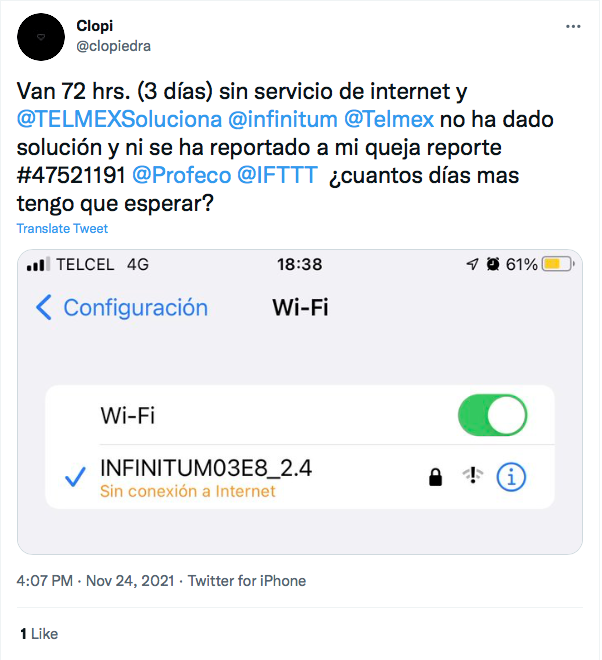 Today, Twitter user Clopi (@clopiedra) denounced through the social network that it has been without internet service for 72 hours and Telmex has not resolved her request.

They go 72 hrs. (3 days) without internet service and @TELMEXSoluciona @infinitum @Telmex It has not given a solution and my complaint has not been reported, report # 47521191 @Profeco @IFTTT How many more days do I have to wait? pic.twitter.com/WMqjgUufew

Today, social networks are of great help for users and a basic communication tool, and also in demand.

Thanks to its boom, today we have the possibility to express our complaints and / or comments when the service of a company, a restaurant, a bar or the provider of any service that does not satisfy us.

Customer service through social networks is essential for consumers who are affected by a brand / company, since it is much more effective to file a complaint on Twitter than to file a lawsuit with the corresponding authorities.

However, there are companies that give their positioning, half answers or, what is worse, do not follow up on these complaints or claims.

In the case of the user, she has been without internet service for 3 days and the company had not provided a solution.

Today more than ever, customers want to be heard by companies and the Telmex Soluciona account knows this very well. Within minutes of her complaint, the company asked the user for confirmation of the termination of her contact numbers.

When a brand gives a personalized service, customers establish a relationship and are giving a signal that the brand is interested in being in contact with them.

The greatness of Telmex and consumer complaints

Telmex occupies half of the percentage of the fixed telephony market in Mexico, however, in recent days, the Federal Consumer Prosecutor’s Office (Profeco) released the list of providers with the most internet, television and telephony complaints in Mexico.

Although Telmex has a great expansion in the country, that does not exempt it from giving poor service and customer service, since the company with the most complaints in the first four months of 2021 with 3.03 complaints per 100,000 users, followed by Izzy and Megacable.

According The Competitive Intelligence Unit (CIU), the hiring of fixed telephony services has not decreased, but their consumption has. In the case of Telmex, the company is still present because it has demonstrated added value through packaged services such as pay TV or the internet.

Currently, the service is facing a scenario of seeking permanence among consumer preferences and facing the innovation of mobile technologies, which have captured a large market and are the main replacement factors for traditional media.

Read:  This is how Checo Pérez congratulates Canelo after his victory