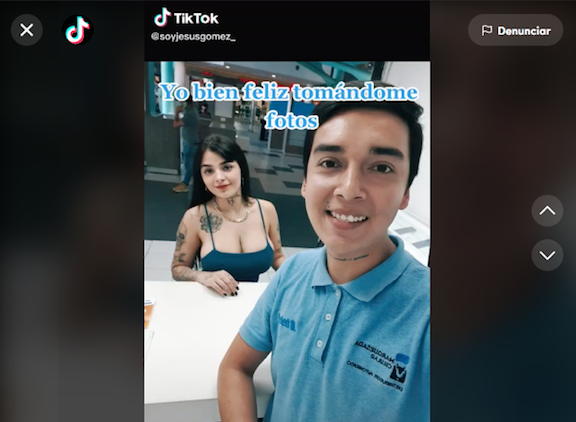 A young Telcel employee took advantage of the occasion to take photos with Karely Ruiz, but he did not expect the reaction of his boss, who decided to respond to the young man’s social media post by sending him a message through WhatsApp.

The name of Karely Ruiz, in Mexico, is one of the most talked about in recent years; She is one of the most famous content creators on OnlyFans, a platform on which she has with more than 100 thousand subscribers to its contents, to whom it charges 16 dollars per month. Likewise, the content creator has revealed on several occasions that she earns up to half a million pesos a month.

In an era dominated by creators and/or influencers, Karely Ruiz has stood out for being one of the best paid on the explicit content platform, as she told it a few months ago in an interview with Adela Micha on her portal La Saga, where, Among other things, he revealed that he has earned up to half a million pesos monthly.

And it is that, ultimately, OnlyFans became the most recognized platform for those who, due to the pandemic, lost their jobs.

In that sense, OnlyFans, according to data from the platform, managed to reach 1.5 million content creators globally in 2020 alonethe most serious periods of the pandemic.

Similarly, 2021 was for OnlyFans one of the most profitable years, reporting revenues of up to five billion dollars and a wide community of creators that, to this day, continues to generate all kinds of content.

Karely Ruiz, as we already mentioned, is one of the most popular creators today, who, in her beginnings in OnlyFans, he started earning 20 thousand pesoswhich is why she did not hesitate to start uploading various photos until she became one of the creators of the Top 5 on the platform.

Read:  TikTok can ban you if you put this character in your profile picture

Given this, the case of a young Telcel employee who met Karely Ruiz on a normal day at work and took advantage of the situation to take some photos with the model is not surprising.

As expected, through his social networks, he shared these images, but he did not count on the fact that, through the security cameras, his boss had seen everything and did not hesitate to communicate with the worker.

According to what the young man told on TikTok, his boss’s reaction was to say, through WhatsApp, “And how do you work!”

Days later, the telephone employee himself told the full version of what had happened to his boss. This is what he revealed:

“This was in Monterrey, Nuevo León. The girl came with her boyfriend, her boyfriend came to ask for information about her plan. She stayed in a stuffed animal machine. At the time of her I did not recognize her, until a girl from the place across the street asked for a photo of her. I didn’t know if she was or wasn’t until she walked in and stood next to her boyfriend,” she mentioned.

“I didn’t know how to react, I gave her the most detailed information I could, and when they were leaving, the girl was serious and said: ‘I don’t think she wants a photo with me, but I’m going to ask her.’ I told her and she said, ‘Yeah, that’s fine.’ The girl is kind, very cute, very pretty and, above all, she looks like a Barbie.

“As soon as he left, I uploaded the photo and that was when my manager sent me the messages, she told me why she came, what she is doing here and I told her what I am telling you. She sent me the photos of the cameras, but I cut the message, below it said many ‘Hahaha’. But whether it was true or in jest, I left happy because I finally met Karely Ruiz.”

Looking ahead to the next few years, reality dictates that the influence of the Internet will be even greater for the generations to come. The pandemic only came to give the last push for a process that has been manifesting for some time.