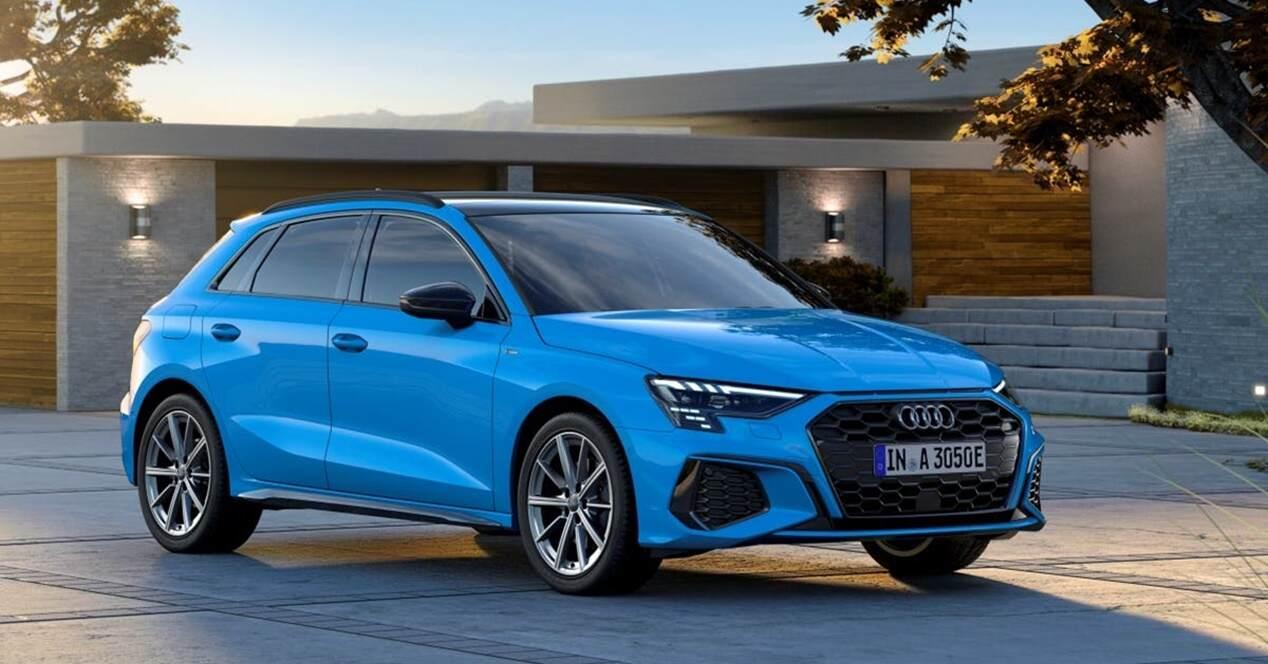 The 2020 Audi A3 Sportback, which is also sold with a Sedan body, is the Fourth generation of the premium compact. It is a plug-in hybrid that allows you to enjoy driving like never before. With all the autonomy we need and the power we seek, it combines the advantages of a combustion engine and an electric motor. The best? That unites the most gratifying of one to stage all the good of the other.

This version 40 TFSIe is the one that presents a combined power that delivers 150 kW (204 hp), where it is joined by its sporty and balanced suspension. To differentiate itself from what may be the access PHEV (this one with 245 hp), it has details such as its black design package.

Gradually slipping into the best-sellers of the moment (in April and May it obtained record numbers for the brand), its forecast is that it will lead the area sooner rather than later. In addition, in the absence of one, this A3 has two plug-in hybrid versions, although for price this is the most interesting: it can travel 65 km in 100% electric mode.

Therefore, and for those looking for a compact with a premium image and also the technology of the big brands, this is one of the best options on the market. Yes indeed; its price is not entirely accessible (40,000 euros). In turn, its motorization helps you get the sticker Zero emissions of the DGT. Its great rivals are the Mercedes-Benz A-Class and the BMW 1 Series.

The first thing that we are going to observe about this car is that its line is totally futuristic, which indicates a step forward also in forms and structure with its predecessors, especially with what has to do with its main model, the classic A3. So it has a avant-garde design that has continuity inside, as we will see below.

This Audi A3 Sportback measures 4.31 meters long, 1.42 m high and 1.78 m wide. No external measure of the German model surpasses the average of its direct rivals in the segment, which gives us an idea of ​​the reason for its success. On the front some chrome details stand out but, above all, a specific grill with more slats. Behind the logo is the electric charging socket that is opened manually.

On the sides, the rib that originates behind the front wheels traces a curve that extends to the rear light cluster. The main novelty of the rear is concentrated in the area of ​​the bumper, protected and chrome. It also includes two small cooling openings and a new profile in the loading mouth. As we mentioned, it differs from the access PHEV by its design pack in black and its rear windows darkened. In addition, it fits 17-inch wheels and a brake system with larger discs,

Belonging to the C segment, this Sportback is one of the compacts with the most presence and importance within the Audi range. So much so that they wanted to make him even more of a protagonist with one more version available, especially in the plug-in hybrid branching.

In fact, and next to the model that concerns us, we find the one known as 45 TFSIe. This, which came out on a par with the 40, delivers a somewhat higher power (245 hp), but where its electric autonomy (63 km) barely distances itself from the best-seller, it even offers a little less.

Yes indeed; Both carry the DGT’s zero emissions environmental label, the same as for electric vehicles. For what has to do with the most sought after version, the one that is providing the best results and yields, the 40 TFSIe, it does so with powers of 204 hp and autonomies in electric mode 65 km. On the other hand, and beyond the PHEV, it also has five other combustion versions ranging from 110 hp to 300 hp.

Focusing more on the engine block of this Audi A3 Sportback plug-in hybrid, we see that its mechanical set consists of a 1.4 TFSI gasoline engine with four cylinders with 150 hp and 250 Nm of torque between 1,550 and 3,500 rpm.

To this is added an electric propeller of 80 kW (the equivalent of 107 hp) and 330 Nm of torque, which is integrated into the six-speed S tronic transmission, which sends the force to the front axle. The total power of the system is 150 kW (204 hp), with a maximum torque reaching 350 Nm. Thanks to this, it is capable of accelerating from 0 to 100 km / h in 7.6 seconds and reaching the 227 km / h top speed.

Regarding its battery, it equips a lithium-ion battery 13 kWh, which can be recharged in just over 4 hours, and supports up to 2,900W. Anyway, this is not the same as the A3 Sportback 35 TFSI, which also has a four-cylinder and 150 hp, but 1.5 liters of displacement. The electric motor is synchronous with a permanent magnet rotor and is located between the combustion engine and the gearbox.

It is this four-cylinder engine that offers us, for its part, that the consumption of this plug-in hybrid is quite similar to that of the rest of its competition, especially seen in comparison with the Mercedes A-Class. Thus, this 40 TFSIe homologates a combined consumption (WLTP cycle) of between 1.0-1.2 l / 100 km.

In this regard, the firm mentions that we can also lower it to 0.9 if we conduct a smooth ride. Meanwhile, the consumption that concentrates the combined electricity ranges between 14.2 and 15.4 kW / h/ 100 km. This is due to its 13 kWh batteries, one of the highest range of the PHEV variant.

READ:  The new WhatsApp function will save you trouble when sending audios

In this sense, this consumption of 1.2 liters per 100 kilometers will always occur with the battery charged, because if it is discharged, the consumption figures increase a lot. But consumption figures, as is well known, do not always match reality. Good for the type of driving, for the terrain … in this case, Audi has also revealed that the average consumption can be around 4 l / 100 km, this while recharging the battery frequently.

Entering fully into the interior area, here we find a design aspect that, despite following the line of other generations, is seen with a more than attractive and comfortable appearance. Given this, we can say that your habitability is pretty good, even that it has grown a little with respect to the purely gasoline.

This interior is characterized by the compact gear-specific knob, its striking door-opening handles and a large black surface on the dashboard. A curious fact is that the upholstery of the seats is made with material from recycled bottles.

Here stands out the new driving position where you can guess a cockpit more focused on the driver. There is also a dashboard with horizontal lines where it has been sought to dispense with the bulk of the controls to center most of the functions on the central 10.1-inch touch screen.

In the case of the box instruments is always digital, with a 10.25-inch LCD screen in the simplest finishes and 12.3 ″ in the most complete finishes. There, as we will see from the equipment side, it is shown with several quite differentiated levels to add to the series. What is reduced is the trunk space, which is just over 280 liters, much smaller than other direct rivals. Its volume loses 100 liters compared to the thermal versions, although we can always fold the rear seats to achieve 1,100 liters of total capacity.

The possibilities for equipment, infotainment and driving assistance are extensive in the Audi A3. Thus we find an adaptive cruise control with Stop & Go function, autonomous emergency braking or lane change assistant.

This is the first, the serial. Which also integrates an assisted parking system, Matrix-LED lighting with adaptive control, signal recognition, Car-to-X communication, compatibility with Android Auto and Apple CarPlay (wireless) and integrated eSIM with internet access.

On the other hand there is the S Line, which adds features such as cruise control and speed limiter, a two-zone automatic climate control, smart key, electrically adjustable and heated rear-view mirrors, and the height- and depth-adjustable, leather-wrapped steering wheel. In addition, it adds the rain sensor, 18-inch light-alloy wheels and the aforementioned S line exterior package, this one with black accents.

At the same time, and from the hand of these two equipment that we have seen, Audi and its A3 Sportback allow us to complement it with other quite elevated elements that will make it because it also integrates even more performance characteristics, and that the former do it with an integration quite helpful.

For this reason, we have two more levels of extras. One is the Advance that allows you to add parking assistance and aesthetic details typical of this version, both outside and inside, where the aluminum package is added. This is priced at 2,000 euros above the standard equipment.

The other is also the S Line, but with different positions. In this case, most of the improvements are directed towards a sportier look and feel, with a revamped exterior package, 18-inch Audi Sport wheels and a black roof. Inside, the sports seats stand out. Sports suspension is added that reduces the body by 15 mm, and is priced at 1,350 euros more than the Advance and € 3,350 more than the series.

On the other hand, and if what we want is for our Audi to have a long and healthy life, it is essential that you know everything about its maintenance. It is true that being a plug-in hybrid and not having so many elements subject to wear and tear, its cost will be lower, but it is also important to know what we can take care of, and how often.

However, in hybrids, Audi estimates that the service battery of this A3 Sportback is changed every four years, while in the gasoline or diesel versions it is not a component with a preset life. This is also seen with the change of the belt, which is shortened from the 120,000 to 90,000 km or 6 years.

The rest of the components have very similar interventions programmed and there is no maintenance marked for the electric propulsion system. Diesel does schedule, although in the very long term, more complex interventions, such as replacing the timing belt or checking the particulate filter.

One of the main questions that we all ask ourselves (or should ask ourselves) when we buy a new car is whether or not it has guarantees and what they are. In the case of Audi, or it is true that they are quite extensive, also because they are included within the same Volkswagen group.

In addition, at the Audi Official Workshop Service, all repairs have a 2-year warranty, 12 years against perforation or corrosion in the case of the bodywork and 3 years in paint defects with no mileage limit. In addition, for what has to do with its batteries, the brand presents a coverage for these units of Eight years up to a maximum of 160,000 kilometers.

Does a pharmacy doctor or a public assistance doctor earn more?