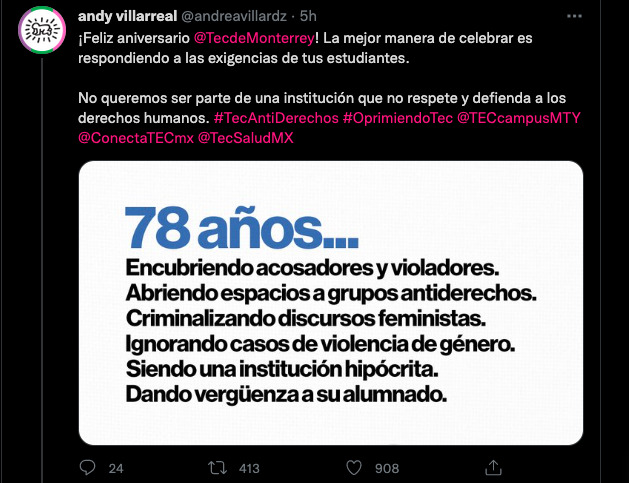 Social networks reacted to one of the new groups at Tec de Monterrey, which bears the name ‘Vitae’ and among its objectives is “to promote human life from fertilization to death”, which could be translated as a group in against policies like abortion.

Given this, dozens of people have come out to demonstrate against the group, but especially against the university, for which they generated a hashtag on Twitter that, at least at the time of writing this note, was number one within the trends within Mexico.

Information shared by the newspaper El Norte indicates that the group of students created a space to “talk about ‘human dignity'” since that is natural in the institution, “whose motto is the human sense.”

The members of Vitae assured that their interpretation is based on the principles of the UN, despite the fact that the organization’s Human Rights Committee reported in 2018 that abortion is a fundamental human right.

The group assured that its struggle is equal to that of groups for women’s rights and the LGBT + community.

“Vitae’s mission, Canales said, is to foster appreciation, respect and protection of human life from fertilization to death.

Cynthia Canales, president of the group composed on its board of directors by six students from careers such as Medicine, Biomedicine and Economics, pointed out that it took about 8 months to consolidate the group until last September 3, a protest was rendered to be part of Chapters Students.

“They made us read a regulation of the student groups and we were working hand in hand with the Director of LiFE at that time, by trial and error.

“We wrote objectives, we wrote mission and vision and he told us: ‘No, this is not allowed at Tec or this change it and focus more on that,'” Canales, 21, told the outlet.

He also assured that the school recommendations were not to confront anyone. He added that they do not expect to do so.

In social networks, the news was not well received by members of the student community, especially after Rodrigo García, vice president of Vitae, decided to publish a tweet showing hateful behavior towards the LGBTQ + community.

“A ray of hope for this university that has been influenced by the trends of abortion and gender ideology in recent years. We move on! ”García posted.

Even if I erase it, here is the proof that a student of this anti-rights group not only violates women but also the LGBTIQ community, gender diversity and other historically oppressed minority struggles @TecdeMonterrey #TecAntiRights pic.twitter.com/eRd54Xk57R

Given this, 49 student groups joined by means of a statement to express the disagreement that Vitae represents with the Tec’s commitments to the 2030 Agenda for Sustainable Development.

Read:  Cancun estimates historic tourism growth with these investments in 2023

“Beyond being a student team on campus, these collectives and groups tend to polarize through sensational news, misinformation and the invalidation of social progress – taking their impact outside the institution and threatening reproductive health, freedom and rights. ”Reads the document published by Girl Up Tec Mty.

A few hours ago, the Tecnológico de Monterrey issued a statement in which it assured that it would carry out a review of the group’s work plan, its value proposition and its public voices.

“We seek to be an inclusive Institution and like any university, to be a space where a great diversity of ideas is discussed, as long as they are given in a respectful framework,” read between the points.

However, the news was not well received by some students, because after its publication the demonstrations from Twitter against the educational institution intensified, as they indicated that the answer was not correct and was contradictory with some other topics such as conferences within the own Tec de Monterrey.

I love my alma mater, but his lukewarm approach to issues fundamental to the progression of human rights has historically been disappointing. The newsletter they put out today is absurd and empty. Let it be heard loud: We do not want a #TecAntiRights. @TecdeMonterrey @TecdeMonterrey

Happy Anniversary @TecdeMonterrey! The best way to celebrate is by responding to the demands of your students.

Attacking sexual and reproductive rights IS NOT FREEDOM OF EXPRESSION. The representatives of that group spread false, sensationalist information and condemn these rights.

what kind of canceled youtuber apology is this #TecAntiRights https://t.co/9R8rXcq2ZG

Hopefully the authorities of the @TecdeMonterrey they will take the course “raising awareness in human dignity” that they created. #TecAntiRights pic.twitter.com/KB9rcst8HG

These experts will teach you everything about Retail Marketing