Teacher buys televisions for her students to watch the World Cup 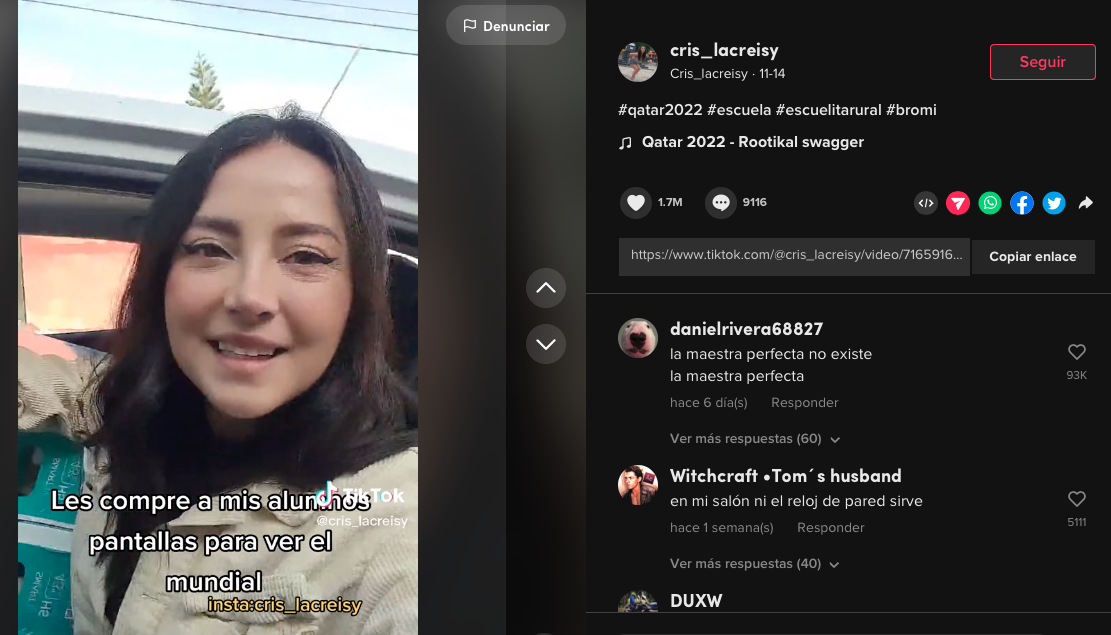 Social networks have become the best communication tool in the world, which is why it is normal to find in these media any type of information and stories that go viral because of how peculiar they are. This is the case of a Mexican teacher who had a nice action when she bought televisions for her students to watch the Qatar 2022 World Cup.

The soccer world cup FIFA is one of the most important sporting events in the world, that is why its audience exceeds millions worldwide. In that sense, FIFA reported that more than 3.5 billion people watched a part of the 2018 World Cup, with 1.12 billion watching at least one minute of France’s 4-2 victory over Croatia in the final.

This year, with just five days to go, it has obtained an audience that is growing compared to past world events. The opening match between Qatar and Ecuador on Sunday, November 20, it was watched by an average of 3.3 million viewers, with a peak audience of 3.6 million. This represented a 109 percent increase in viewership for the opening match compared to the highest rating in the last two editions.

For its part, a survey carried out by Ipsos in 34 countries on Attitudes Towards the FIFA World Cup Qatar 2022, highlighted that in Mexico, On average, 69 percent indicated that they will watch the World Cup matches and events, which began on November 20 and ends on December 18.

Viral for the World Cup in Qatar

The World Cup in Qatar is not only paralyzing part of the social agenda of soccer fans, but due to the time of year in which it is being played and the time difference, it is also affecting the work and academic life of some people They have had to make changes.

This is the case of a teacher who took the time to buy televisions for her students so they can enjoy the games.

The teacher, whose name is @cris_lacreisy on TikTok, shared her action in a video that consisted of buying three televisions and one speaker

In the video, which has catapulted this teacher on social networks, you can see her showing in her car the three screens and the speakers that she has bought for three different courses at the rural school where she is a teacher and director.

“I bought my students screens to watch the World Cup,” reads the overprinted text on the image.

Likewise, in a second video the teacher shows how they installed the 43-inch televisions specially prepared to watch the World Cup according to the manufacturer’s specifications, to watch the Mexican team play against Poland.

In the recording you can see that the students watched the game and accompanied it with sweets and soft drinks.

Given the beautiful action, the teacher’s videos register more than 11.5 million views and more than 1.6 million ‘likes’. In addition, the @cris_lacreisy account has more than 4 million likes among all her clips.

Likewise, many Internet users have commented on the videos, where they congratulate her on the beautiful action. “I want to go to that school too”, she read herself in a comment. “This is proof that the perfect teacher does exist,” says another Internet user.

“Best teacher in the world,” wrote another.

“These students are going to adore her for life,” says another.

And this is how the World Cup has generated a large amount of content globally, which is why these types of stories are going viral, demonstrating the importance of this event in many industries and especially in the human collective.