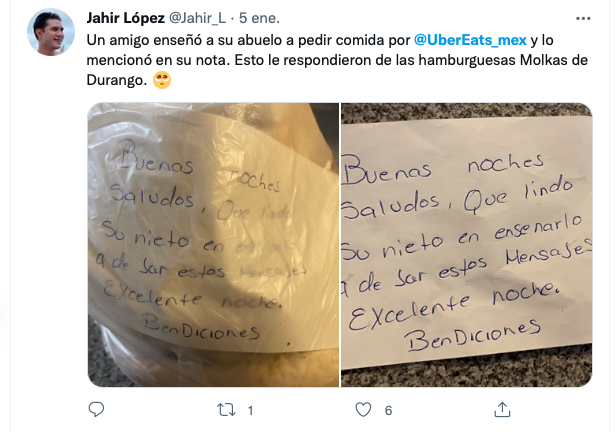 Social networks are the preferred medium for many people in the world to express how they feel. Many people use these platforms to tell beautiful and positive stories, where some involve brands, such as one that circulates on Twitter that makes mention of the Uber Eats app.

A user identified on Twitter as @Jahir_L shared with his followers a tender story, where one of his friends taught his grandfather to use the home delivery application Uber Eats and left a note to the restaurant where they were ordering food and he responded with a tender letter when they sent them their order.

“A friend taught his grandfather to order food on @UberEats_mex and mentioned it in his note. This was answered by the Molkas hamburgers from Durango ”, says the tweet that is accompanied by the image of the order and the letter sent by the restaurant.

In the letter you can read: “good night greetings, how nice your grandson in teaching him to leave these messages. Excellent night, blessings ”.

A friend taught his grandfather to order food by @UberEats_mex and he mentioned it in his note. This was answered by the Molkas burgers from Durango. 🥺 pic.twitter.com/zP81nvC11W

The publication has recorded several interactions from netizens because of how spontaneous and cute it is.

The use of new technologies, applications and social networks, they have spread in recent years to almost all generations.

It is normal to think that the last generations are the most digital, but that is changing over time, since there are already many people who are becoming interested in using or having a presence in the digital world.

Specialists assure that the technology adoption process has been so accelerated in recent years that for the first time it has managed to permeate in a massive way in all age segments of the population.

They also ensure that, however, there are still significant differences when segmenting the access and use of ICT (Information and Communication Technologies) applications and devices between the different age groups.

According to data from U-Gob the Generation Z are people between 31 to 50 years that are equivalent to 27.2% of the population. “Generation X people have easily adapted to technological advances, such that 82% of mobile users own a smartphone and 22.4% have a tablet ”.

It should be noted that these users register the highest spending on tablets, since, unlike people of other age profiles, they prefer to buy devices from recognized brands.

While 92.9% of millennials have a smartphone, these being the most intensive in its adoption and those that spend the highest average spending on its purchase. The data reveal that only 23.8% own a tablet and allocated an average of $ 4,606 pesos to obtain it. In turn, this segment of the population allocates a greater amount to the purchase of these devices compared to Generation Z people.

They warn about the danger of financial influencers: “it is not a game, you can lose a lot”