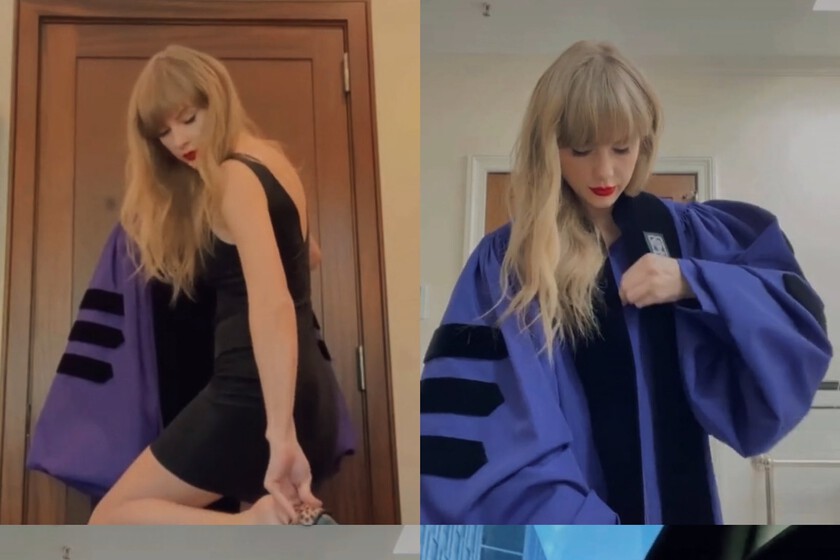 It is the season of graduations and end-of-year parties, and this year, that time has had an unexpected protagonist. This is not only because the singer Taylor Swift has received an honorary Doctorate of Fine Arts from New York University, also that she has been invited to give the opening speech at the ceremony held at Yankee Stadium. Twenty minutes in which the singer has taken the opportunity to review the ups and downs of her life and career and infer from it some advice for recent graduates.

“Hello, I’m Taylor Swift. The last time I was in a stadium this size I was dancing in heels in a sparkly leotard,” she began with a laugh. the artist dressed in the cap and gown typical of graduation attire. “This outfit is much more fun,” she has sentenced to the laughter of the attendees.

Although Swift has not passed through the classrooms of New York University, this institution has decided to make her a doctor, at least on paper. “Not the kind you’d want around in an emergency. Unless your emergency is specifically that you need to hear a catchy song and an intense, cathartic musical bridge,” she continued to joke.

The winner of eleven Grammy Awards became in 2021 the first woman to win the category of best album of the year three times and has sold more than 100 million records, so she has a lot to say, although she assured that “in no way ” she feels qualified to say what to do. “You have worked and fought and sacrificed and studied and dreamed your way here today. I won’t tell you what to do because nobody likes that, but I will give you tricks from when I was starting to dream about my career.”, he explained during the speech.

However, she was honest with the harshness of the life events that they would have to face now that their adult life begins: “This may be hard to hear but you will inevitably be wrongYou will trust the wrong people, you will react inappropriately, you will hurt people who don’t deserve it, you won’t think or overthink, you will self-sabotage, you will create a reality where only your experience exists,” Swift listed.

Read:  15 shirt dresses from H&M, Cortefiel and El Corte Inglés that are authentic look-savers to go to the office this spring

“You will ruin good times for yourself and others, you will deny any offense, you will not take steps to fix it, you will feel very guilty and let the guilt swallow you, you will hit rock bottom, you will finally take responsibility for the pain you have caused and you will try to do better next time. ..”, the singer continued to list to finally warn them: “and I’m not going to lie, those mistakes will make you lose things”.

Taylor Swift before and after: this is how the singer’s style has evolved

Later, the singer’s great pearl of wisdom was to ask the students to “Never be ashamed to try. Lack of effort is a myth”, sentenced. Then I develop this idea a little more: “The people who wanted it least were the ones I wanted to date and be friends with in high school. The people who want it the most are the ones I now hire to work with me.”

He then concluded his speech warning them that we will all experience “tough things” but “we will recover, we will learn from it, we will grow to be more resistant because of it. And as long as we are lucky enough to be breathing, we will inhale, exhale, take a deep breath and release the air. I’m a doctor now so I know how breathing works”, he joked again.

Taylor Swift’s Pearl of Wisdom in her Ph.D. speech: “Never be ashamed to try”

The coolest bag to go to the beach this summer is this one from Bimba y Lola (and it’s half price in the summer...

it’s fresh, easy to combine and is available up to size 46

Dunning-Kruger syndrome, a pathology suffered by all “opinologists”